Want to have a remarkable MBA experience abroad but confused between the various countries that offer good MBA programmes? Here are the five best countries to study MBA abroad paired with the most popular b-schools. 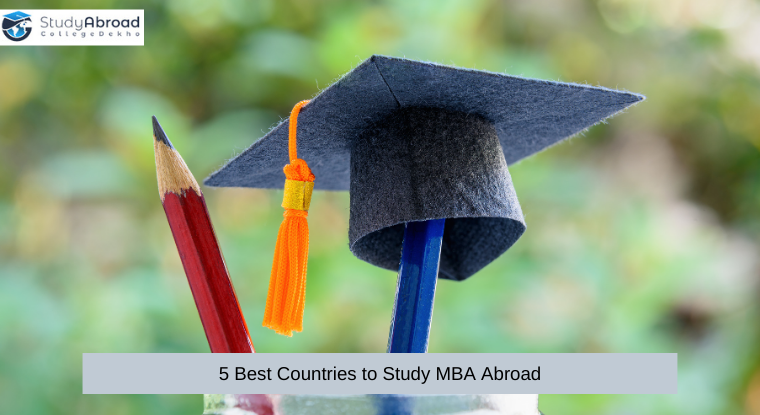 An MBA, as perfectly as it possibly positions you in the business world, the global economy demands you to understand the market with a broader perspective. The challenges posed after the advent of globalization has further pushed many across the world to pursue an MBA from a foreign b-school.

With its innate ability to accelerate your career prospects and let you thrive around a foreign community, studying MBA abroad today has become rather imperative than discretional.

According to GMAC’s Application Trends Survey Report 2019, 4 in 5 b-school candidates consider an MBA (79%), and 2 in 3 enrol either in a full-time one-year MBA or two-year MBA (65%). It also revealed that more than 90% of Fortune Global 100 and 500 companies were keen on hiring MBA talent with US$115,000 being the median annual base starting salary at US companies. Also, an annual Application Trends Survey conducted by the GMAC reveals a rise in Business Schools Applications- 2020.

Now that we’ve established that studying MBA abroad leads to an enriching experience, let us have a look at the five best countries to get an MBA from.

Here are the top five countries with the most popular MBA courses, duration of the course and average tuition fees:

MBA from the USA

Have you been told that MBA originated in the USA in the early 20th Century? It was later adopted by universities in other countries. According to Open Doors Report 2019, India has been sending the highest number of MBA applicants to the US, second only to China.

US universities offering MBA programmes stand aside for reasons such as practical experience and guidance from experts, multicultural environment, the enormous scope for networking, faster career progression, among others. Statista, an online portal for statistics, in 2019, pointed out that MBA graduates in the USA can expect a starting salary of approximately 115,000 U.S. dollars.

The students who cannot undertake a full- time MBA course have an option for part-time MBA programs. In fact, the part-part program is in great demand among international students. According to the reports for 2013/ 2014 school year, 37% of the students were enrolled for part-time MBA in US universities and attended classes in the evening or on weekends.

Want to Study MBA in the USA?

In the QS Global MBA rankings 2020, a total of 240 universities were featured, out of which 18 are Canadian universities. Most universities amongst these are ranked high for the high rate of return on investment, graduation outcomes, diversity and post-degree employment. From top universities to a thriving job market, Canada is credited with a number of merits to become one of the top study destinations for MBA. In 2019, the U.S. News & World Report ranked the country 7th in the world for Entrepreneurship and Open for Business.

Also, with a recent promise to welcome more than 1.2 million immigrants over the next three years (2021-2023), visa regulations are less restrictive as compared to that of the US. The country also makes sure that international students are offered a good number of work opportunities, both on-campus and off-campus, along with a good quality of life.

Want to Study MBA in Canada?

Also Read: Canada or USA? Which is Better for Pursuing MBA

Australia has been witnessing significant growth in foreign student numbers in the past few years. In 2019, it registered a double-digit growth with a total of 720,150 students enrolled in programmes across various areas. Study in the field of business and management in the country is considered top-notch for several reasons, one of them being the positioning of 11 Australian b-schools in the top 200, according to QS Global MBA Rankings 2020.

Most MBA programmes offered at Australian universities are internationally recognised and have global accreditation from the AACSB and EQUIS. In addition, the country’s multiculturalism, a blend of practice and theory, development of specialised skill sets, opportunities to widen your professional network, among others, make Australia a great destination for MBA aspirants.

With the launch of the Graduate Management Association of Australia (GMAA) in 1978, not only is the value of MBA being highly promoted and enhanced every year but management students in the country are also being recognised and provided with opportunities to interact with industry professionals.

Want to Study MBA in Australia?

Also Read: Timeline for February 2022 Intake to Study in Australia

One of the biggest advantages of studying MBA at German universities is that Germany is not just the largest economy but also the strongest, according to Investopedia. A strong economy attracts and guarantees a stable influx of both domestic and foreign graduates in the field of business and management.

Germany’s geographic location, crossing the Western and Eastern Europe, acts as a great advantage for potential customers and entrepreneurs, paving the way for new businesses, growth in technology startups and more innovation across various industries.

Besides, the country’s education system comprises renowned academicians with advanced expertise in the business world, thereby, adding more value to a German MBA. The immigration laws in the country further allow students to get an 18-month residence permit and look for jobs that meet their requirements.

Want to Study MBA in Germany?

MBA from the UK

With 27 UK universities named in the QS Global MBA Rankings 2021, the country is likely to show up on your list of shortlisted countries for an MBA. The London Business School comes at the top of the country list at the 6th position, along with 9 more universities in the top 100 in the world.

Most international students opt for an MBA at UK universities for their close links with industry, wide scope of networking, relatively lower tuition fees, global recognition and career services during and after graduation.

Being a key consideration for prospective b-school students, the ROI for MBAs at UK universities is high, with students earning between $80,000 and $180,000 only three years out of the course.

Want to Study MBA in the UK?

Also Read:  Top Courses to Study in the UK for International Students

Hope this helps you in getting some clarity on which country would be the best fit for you to pursue an MBA abroad. For any doubt or query, you can write to us at abroad@collegedekho.com.