Common Mistakes to Avoid in LOR

Submitting an LOR is a major step in the process of applying for admission to a university abroad. While it's important to prepare for the task, there are some common mistakes that people make in an LOR. Find out what these are! 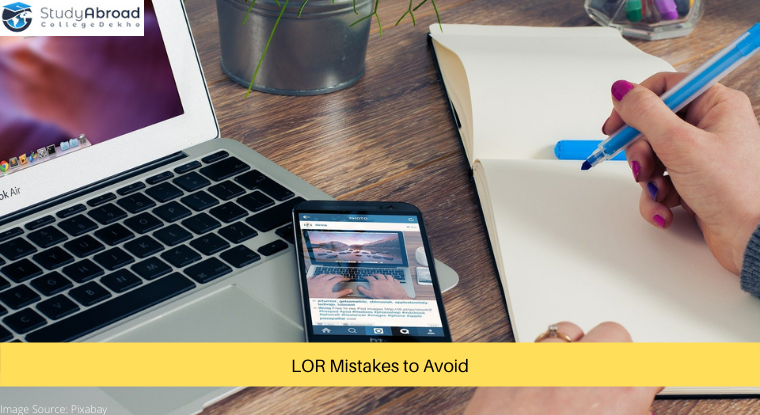 A letter of recommendation is a type of letter that a person can give to a client or former employer to recommend their work or academic performance. The goal is to highlight the person's abilities and achievements that would make them a great fit for a job or college program. LORs are usually written by a professor or colleague requested by the potential student to be sent to the admissions committee.

Put simply, an LOR is a vital document that influences your admission to a university abroad. It summarises all of the claims that you made in your CV and is used to evaluate and rank your achievements. It also serves as an important part of your academic CV as it influences your selection process.

Well, given how important an LOR is, it is extremely significant for your recommender to avoid making mistakes in it and ensure that it is only perfect. But which mistakes should you definitely avoid in an LOR? Let us find out!

8 Common Mistakes to Avoid in LOR

Being asked to submit an LOR, also known as a recommendation letter, can be a big responsibility. Before you begin, it's important to read through the requirements carefully.

Before you draft your letter of recommendation, it's important to analyse and establish who you would like to recommend. Ideally, the person who should be your recommender should have the necessary knowledge and skills to present your recommendations in a convincing manner.

The person who has the least amount of knowledge about you should not be considered as a recommender. An assistant professor may be an ideal choice since he or she has taught you about one subject.

2. Repetition of Your SOP and Resume

Your LOR should not be a rehash of your SOP and Student CV. It should also introduce new qualities and skills that you did not mention in your CV and SOP. Your LOR should be written in a way that draws the reader's mind to the complete personality of the person who would be interviewing you.

Repeating factual details and figures from your resume will make the admission officer uncomfortable.

Get Professional Support in Applying for Study Abroad Universities.

Make sure that you provide enough information about yourself to make a good recommendation. Make sure that your referee has plenty of time to draft the letter. This ensures that the referee has enough time to highlight the qualities that you should include in the LOR. If there's a backup referee, make a list of them and provide them with all the information that they need in a Word document.

4. A Letter Too Short

Either way, the referee remains unsuccessful in delivering a convincing LOR. A good LOR should include a specific example or instance to validate the claim made by the recommender. Not only should the letter contain a good example, but it should also be followed by one.

Ideally, the recommender should state their claim in an example that shows how or why they were able to implement a theoretical concept in their class or lab.

6. Making Your LOR Too Positive

Having too many positive words in the LOR can lead to uncertainties and doubt in the mind of the committee. Being able to use positive words is not limited to just your personality but also your weaknesses can make a huge impact on the committee. One thing to avoid is using the clichéd phrase “being a perfectionist”. So, make sure that you include at least one weakness in your LOR.

Learn About the Best Suited Courses for 'You' to Study Abroad!

It sends a strong message of appreciation to the former employee or student, and it lets them know that you valued their work. A great letter of recommendation can make or break a person’s chances of obtaining a job or entering a college program. Due to the importance of a great letter of recommendation, it is very important that the writer has time and effort to draft one that will be effective.

How to Improve Your LOR?

Here are some of the suggestions on how you can improve your chances of admission by writing a great LOR:

1. Use a Customized LOR for Every Programme You Apply for: While it’s possible to create a basic template, make sure that you customize it with specific details to highlight the qualities and qualifications of the candidate. A good template should also include a general outline so that you can easily remember all of the key points that you want to include in the letter.

2. Check your CV and Resume Thoroughly: Before you begin writing a letter, take a look at the candidate or student’s resume to get a full overview of their previous work experience. Having a good understanding of the candidate's background can help you create a more detailed and focused letter. You can also ask the candidate or student to provide feedback on areas that need improvement.

3. Prepare a List of Abilities and Associates Examples: As you review the job description and the candidate's resume, compile a list of the candidate's qualities and accomplishments, which you believe highlight their qualifications. For the candidate, share the most marketable assets that you think they could use for their next job.

4. Use Active Voice in LOR: Instead of using passive voice, use active voice. Active voice also makes your message more clear and concise by reducing the number of words needed to express the action. For instance, if the subject is first in the sentence, it makes it clear who is doing the action.

Since the LOR is not the only document that's included in the application, many students tend to overlook it. While they might have worked on a great resume and statement of purpose, failing to provide a compelling LOR could affect their chances of being accepted.

For more doubts related to a letter of recommendation, and other procedures of the college application for studying abroad, write to us at abroad@collegedekho.com.

We Can Help You in Connecting with Best Foreign Universities!