Entrance Exams to Study in Canada

Apart from being the second largest country, Canada is also a favorite study destination for international students. But to get into Canadian universities, you need to crack specific entrance examinations for Bachelors and Masters. Read the article to find the list of entrance exams to study in Canada. 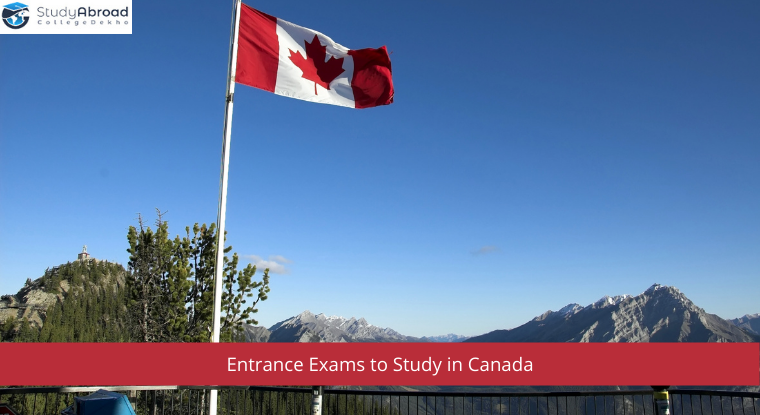 Sprawling across more than half of the Northern Hemisphere, Canada is a blissful haven for higher education. It spans around six time zones and features varied topography. The number of international students choosing Canada for higher education is burgeoning every year. But, one question certainly lingers in every international student's mind - 'Which entrance exams in Canada are required to study bachelors or masters?'

Canada’s top institutions invite applications every year and education is booming in the country for its multicultural and amicable climate. Additionally, well-advanced technology in the country is implemented in education and the advantages of digital media are harnessed by the students studying in Canada. If you want to study in Canada, then you must know the eligibility criteria as well as the entrance exam for Canada universities including both standardised exams and English language proficiency tests required to study in Canada.

Here's an exhaustive list of the entrance exams required to enroll in Canadian universities for Bachelors or Masters.

You will be required to fulfill the below-mentioned criteria to become eligible to study for a bachelor's degree in Canada:

The eligibility criteria to study Masters in distinguished Canadian universities is

Our study abroad experts assist students in realizing their dream of studying in top colleges overseas. Many of these students are enrolled in prestigious colleges in Canada.

Get Expert Guidance on Preparing for GMAT & Other Study Abroad Exams!

Speak to Our Expert!

If you wish to study bachelors in Canada, you, as an international student, will have to qualify some standardised tests. The list of the standardised entrance exams accepted in Canada is given below:

LSAT or Law School Admission Test is required to study law in Canada. The reading skills along with verbal skills are tested for admission to Law Schools in Canada. To study at Canadian universities, you need an LSAT score of 160 and 2 or 3 letters of recommendation along with an average GPA ranging from 3.69 to 3.9. University of Alberta and Manitoba University require LSAT scores of 160 whereas schools like UBC Allard School of Law require an LSAT score of 166.

If you want to gain admission to a reputed university in Canada, your high SAT scores will help you to get on the ride smoothly. The test evaluates the writing ability and mathematical ability of the students. It tests the basics on the basis of 3 sections. The total score is 1600. Scores below 500 on the SAT are not accepted at the University of Toronto and students who get above 1150 are generally considered. Dalhousie University and the University of Manitoba accept an SAT score of 1100 whereas McGill University considers not less than 1300 on the SAT. The Algoma University and Acadia University accept SAT scores of 1100.

The Medical College Admission Test or MCAT is given by students who aspire to become doctors in Canada. MCAT exam happens throughout the year but the candidate can take only 3 tests a year and 7 tests in a lifetime. It is one of the longest entrance examinations of 7 hours 30 minutes. The branches of the study of medicine are Allopathic, Osteopathic, Podiatric, and Veterinary. MCAT is conducted by the Association of American Medical Colleges (AAMC). The four sections of MCAT include Chemical and Physical Foundations of Biological Systems, Critical Analysis and Reasoning Skills, Biological and Biochemical Foundations of Living Systems, and Psychological, Social, and Biological Foundations of Behavior. The Dalhousie University requires a score of 503 and the University of Saskatchewan require a score of 503.

If a student wishes to study Masters in Canada  then they will have to appear for:

The GRE test is a combination of the general test and subject tests and writing assessment tests. It takes 3 hours and 45 minutes to complete. The GRE is given by students applying for post-graduate programs like MA or MS in Canada. Students opting for MBA can also appear for the GRE if accepted by the concerned university in Canada.

The framework of the GRE examination is testing verbal reasoning, critical thinking, and analytical reasoning. It is now held 3 times a year and is available in both paper and online formats. The subjects for which one can appear in the GRE are physics, psychology, chemistry, and mathematics. Popular universities such as McGill University require a minimum GRE requirement of 1100, whereas, the University of Alberta asks for a GRE score of 700.

Those who want to study MBA in Canada must qualify for the GMAT examination. The full form of GMAT is Graduate Management Admission Test. In Canada, the GMAT score should be a minimum of 500 or an average of 550 to study MBA. One must have also completed a bachelor's degree with 70% marks from a recognised university. English, reasoning skills, and mathematics are the three areas that are tested in the examination. Canadian Universities have set up high standards and requirements for GMAT for admission to management programs. The GMAT Exam may be attempted 5 times a year whose cost is around INR 17,000. MBA in Canada without GMAT is possible now but In that case, students have to show their proficiency in interviews and MBA essays.

Which Language Proficiency Tests Are Required to Study in Canada?

Canada is a bilingual country, the medium of instruction is English or French. A student studying in Canada must have knowledge of any one of the two major languages spoken by the Canadians. The tests generally cater to the reading, writing, speaking, and listening skills of the candidates.

IELTS also checks the language proficiency of those who want to get admitted to the institutions of Canada. IELTS Academic test is generally taken by the students. A score of 7.0 on the IELTS is generally accepted by Canadian universities. Nowadays without IELTS, study in Canada is also possible.

PTE has recently been accepted besides TOEFL and IELTS to gauge the proficiency of candidates in the English language. For a bachelor's degree in Canada, an overall score of 50 is required in PTE.

This is a specialized test taken in Canada and the score is calculated in a range of 10 to 90. The colleges generally accept a score range between 50 to 90 in CAEL.

TEF tests proficiency in the French Language. To study at french institutions especially in Quebec, New Brunswick and Ontario one needs to appear in the French language test. At the University of Montreal test scores of 400 are required.

To know further about entrance examinations in Canada, you can contact our experts and get their recommendations. Over the years, our experts have successfully helped many students in getting admission to leading universities not only in Canada but also in the US, UK, Germany, and New Zealand.

Want to Study in Canada? Get Help from Our Study Abroad Experts!

Speak to Our Expert!