Everything You Wanted to Know About Ivy League Universities 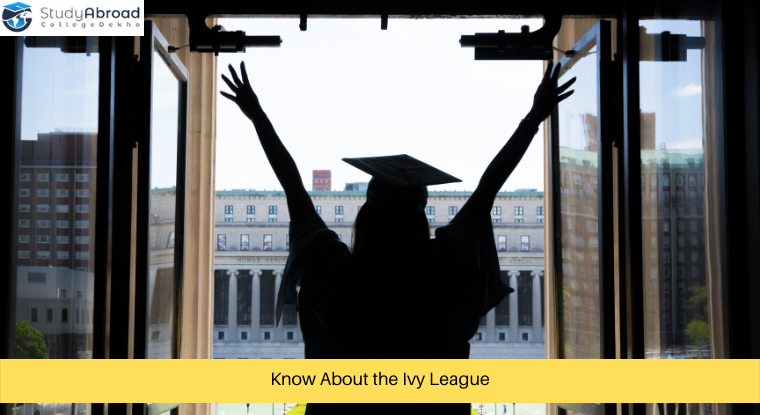 Located in the Northeastern United States, Ivy League schools have been known to produce Nobel Prize winners, future presidents, and other high-achieving graduates. The title "Ivy League" itself separates the eight universities from the pack. Top recruiters always target Ivies because they are known to churn out the best in the market.

Connect With Ivy League Counsellors to Kickstart Your Ivy Application!

The Ivy League - An Overview

What is the Ivy League exactly? Find answers to all your Ivy League questions here in this table below:

Also Read: How to Increase Your Chances of Admission into Popular US Universities

What is The Ivy League?

The term “Ivy League’ was introduced in 1954, when the NCAA athletic conference for Division I was formed. A group of colleges and universities in the northeastern part of the country, Harvard, Yale, Pennsylvania, Princeton, Columbia, Brown, Dartmouth and Cornell are members of an athletic conference for intercollegiate American football and other sports called the Ivy League. The Ivy League schools have been participating in sports as long as intercollegiate sports have existed in the US.

Seven of the Ivies are older than the American Revolution, Cornell was established after the American Civil War, making it the youngest member of the Ivy League. All of the Ivy League schools are private with undergraduate enrolments ranging from 4,000 to 14,000. Total enrollments range between around 6,100 to more than 20,000 every year.

Here is the list of Ivy League schools along with their average annual tuition, acceptance rates, salaries after 10 years of graduation and graduation rates:

How to Get into Ivy League Schools?

If you are dreaming of getting into one of the eight elite Ivy League schools, then you must already know that it is not going to be easy. But, it sure is doable. So, here’s what it really takes to get into the Ivy League:

Know the GPA You Need to Impress Ivy League Schools: Quite simply, given that thousands of outstanding students apply to Ivy League schools every year, these schools get the chance the best of the best. Also, their acceptance rates are low. Now, coming to Ivy Schools’ GPAs, many choose not to release their average GPAs. But, if you look at the average GPA required by all of the Ivies, the average stands at around 4.0. That’s what you need to achieve when it comes to getting into an Ivy League school.

Know What Test Scores are Required for the Ivy League School: Your ACT/SAT scores (for Bachelor’s) or GMAT/GRE (for Master’s) play a crucial role in Ivy League admissions. Make sure to learn about the average test scores required by the school along with their mid-range test scores. Each Ivy League school would have a different cutoff although some schools choose not to release their average standardised test scores.

On average, students with scores within the 25th to 75th percentile range are considered competitive for admission. However, if you have scores above the 75th percentile, you would have a higher chance of getting into an Ivy.

You Should Have Taken Advanced Courses: Let’s face it! Even straight A’s are not going to be enough when applying to Ivies. You have got to stand out. Ivy Leagues often look for students who have taken advanced courses, be it in high school or undergraduate studies. They like to admit students who are keen to grow, achieve excellence and pursue intellectual growth through tough course load.

However, while doing so, you should not forget what you are actually interested in. Always ask yourself what you would eventually like to do or in which field you would like to pursue a career in, or does this course interest you at all. Make sure you are doing courses that will help your journey.

Apply to Ivies With Higher Acceptance Rates: In other words, apply to Ivy Leagues that are comparatively less-selective. Cornell is the least selective with the highest acceptance rate, at 11%, whereas Harvard has the lowest acceptance rate of around 5%. Although 11% is still quite competitive, there is a slightly higher chance of you getting accepted to Cornell than to Harvard or Yale.

Also Read: Best Time to Apply for Masters Degree in the US

Are Ivy League Schools Worth it?

While every Ivy League school charges over $50,000 annually in tuition and fees, many of the Pubic Ivies charge only around $10,000.

Find out if the Ivies meet your unique requirements and always consider taking an expert opinion on which college and course to apply for. Our Ivy League counsellors are on board to not just find the perfect fit for you but also guide you through the entire admissions process. Get in touch with our counsellors for free at abroad@collegedekho.com.