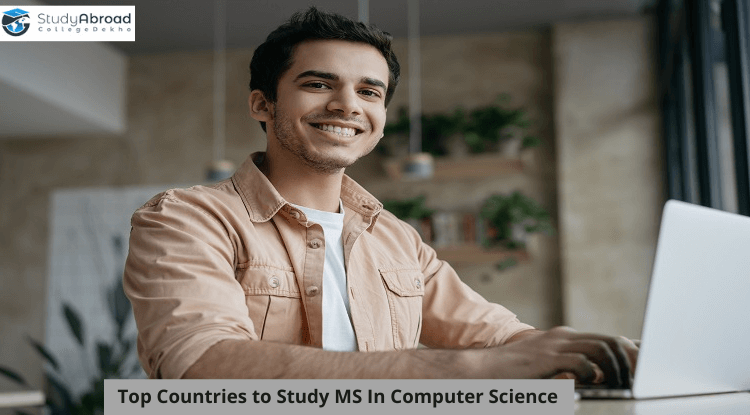 Deciding upon the best country to pursue MS in Computer Science abroad depends upon several factors as moving to a foreign country for pursuing higher education involves many more things than just taking admission in a college. Candidates need to really think it through and not leave much scope for risks. Students need to analyse how the reputation of the college will impact their resume and whether or not it will open employment opportunities in future.

While choosing the right country and university is not a decision that you can take overnight, the following pointers will give you some insights and understanding of all the things that you need to keep in mind before shortlisting a country for further education.

Why Pursue MS in Computer Science

Wondering if doing an MS in Computer Science would be the right choice for you, or if it would give you an edge over others? Here are a few reasons why you should a Master’s in computer science:

Check the list of best countries for pursuing MS in Computer Science. Some other details like the cost of study, best universities, and visa details have also been provided.

US has always been a top study destination for lakhs of students around the world. Some of the best universities in the world are in the US. Popular names include Harvard University, MIT Cambridge, California Institute of Technology or Caltech, Columbia University, Yale University and many more.

US colleges offer academic excellence, flexible curricula, extensive support services for international students, a wide variety of educational options, generous funding, and OPT and CPT that provide hands-on training. Additionally, the US is also home to some of the top universities and has one of the strongest employment sectors in the world.

Best US Colleges for MS in Computer Science

The list of some top US universities has been given below along with their fee structure of MS in Computer Science.

Check the following links for more information about the USA for international students:

In the last few years, there has been a significant increase in the number of international students who have enrolled in Canadian universities. The higher education sector of Canada is characterised by its diversity as all of its institutions vary in their history, size, and the kind of programmes and specialisations they offer. As the US has tighter norms as compared to Canada, Canadian universities have become one of the best places to do MS for international students. The standard of all the Canadian degree and diploma is recognised to be the highest around the world.

Best Colleges in Canada for MS in Computer Science

The list of some top Canadian universities has been given below along with their fee structure of MS in Computer Science.

Check the following links for more information about Canada for international students:

The master’s courses that are offered in the United Kingdom are not only shorter as compared to those provided at other countries but they are also more intensive. Therefore, this enables students to graduate sooner (usually within a year) without having to compromise on the quality of education. This will be helpful in saving your time and money that you will spend on tuition fees and cost of living. The UK has the second-highest number of universities that are ranked in the top 100 by the 2014 - 2015 Times Higher Education World Rankings. Historically, the UK has had a long tradition of education with some of its universities having started as early as in the 12th - 13th century.

The list of some top UK universities has been given below along with their fee structure of MS in Computer Science.

Check the following links for more information about the UK for international students:

Also Read: Top Courses to Study in the UK for International Students

Cost of Living in Australia

Any international student will have to fulfil the financial requirements that are set by the Department of Immigration and Border Protection of Australia. The candidate will have to show INR 10.30 lakhs for his/ her first year to study in Australia. The fee for a postgraduate degree can be around INR 17.30 lakhs. The cost of all the subclass visas for international students in Australia is AUD 575.

Best Colleges in Australia for MS in Computer Science

Check the following links for more information about Australia for international students:

The masters’ programmes offered in the universities of Germany draw on world-leading expertise in a number of fields, especially in engineering, applied sciences, technology, and the related subject areas. The sole criteria for the selection of a student in a German university are academic excellence as documented by means of academic certificates, patents, publications, etc. After completing a degree programme from a university in Germany, a student is allowed to stay in Germany for 18 months in order to look for a job according to his/ her qualification.

Best Colleges in Germany for MS in Computer Science

Check the following links for more information about Germany for international students:

According to the U.S. Bureau of Labor Statistics (BLS), more than 550,000 new jobs in the field of computer science will be created by 2028. While there has been a rise in the number of openings in the area, not many trained professionals are found to fill positions- which also highlights the fact that the field demands those holding more than a Bachelor’s degree.

Get in Touch With Us

For any doubt or query, you can also write to us at abroad@collegedekho.com.