Why Indians Should Consider Studying in Northern Ireland

From flexible immigration policies to a wide range of start-ups and job opportunities, Northern Ireland has emerged to be one of the leading study destinations. Find out why you should consider studying in Northern Ireland, especially if you are from India and also check out their top universities. 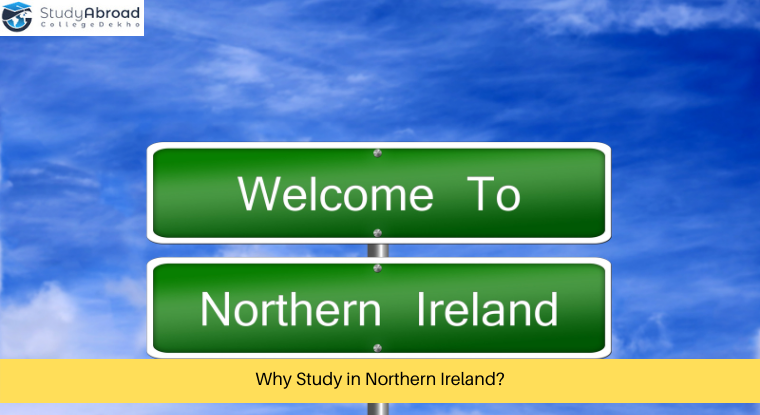 Beyond the fact that the world’s most popular show ‘Game of Thrones’ was shot in Northern Ireland’s capital Belfast, several other reasons including the country’s tradition of academic excellence in the fields of STEM, world-renowned study programs and remarkable hospitality make it a great study destination.

Northern Ireland, a significant part of the United Kingdom, sees  a significant number of overseas students every year from over 140 countries including India. Universities in the country are top-class across a wide range of research disciplines with strong links with industry, ensuring that courses lead to more employability.

So, now the big question here is - “Why should Indian students consider studying in Northern Ireland?” Let us find out why and also check out the top universities in the country.

Studying in Northern Ireland for more than three months requires you to get a UK study visa and not an Irish visa. Given that the UK is committed to welcoming more students from India, the country introduced new immigration rules that will work towards increasing the number of international students to 600,000 by 2030.

Recent statistics also reveal that the number of student visas in the UK issued to Indians increased by 42% amounting to over 53,000 amounting compared to 2020. The new graduate route lets highly skilled migrants holding a job offer from a recognised employer qualify for a visa without any sponsorship or third-party endorsement.

The new route will not have restrictions on salary requirements or caps on numbers which paves the way for you to work flexibly, switch jobs and move up the career ladder as you deem necessary. In addition, the new UK post-study work (PSW) visa will permit you to live and work in the UK for up to two years after completing your Masters and three years after you are done with your PhD.

In addition, The British Council’s Tier 5 sponsorship lets students studying technology and related subjects remain in the UK after graduation to find work in the fields of STEM. The program aims at providing Certificates of Sponsorship and supporting an international applicant’s Tier 5 Visa application.

Despite the global pandemic, Northern Ireland broke a record and raised £45.6 million in the sector of technology, beating the 2018 record of £30.4 million in 2018, according to the data released by Tech Nation and Adzuna.

Since the last 12 years, Northern Ireland, as a region, has been able to draw significant attention from the likes of global teach and management companies across the world. These include PA Consulting, Deloitte and IBM, and PwC that chose Belfast as the primary location for its blockchain development. Apart from these multinational companies, recent investors such as security software service provider Proofpoint and US-based web security specialists, WhiteHat and Imperva have also shown imminent interest in the region and its skilled workforce.

Notably, universities such as Ulster University and Queen’s University in Belfast work with large companies and investors to train their students with the required industry knowledge and skills.

The technology sector in the country further offers employment opportunities with workers asking for up to £10,000 more in wages compared to other jobs. The data pointed out that 806 tech roles were open in the entire region with 516 in Belfast alone that represents 64% of the country’s tech vacancies.

Beyond tech, sectors such as healthcare and nursing, accounting and finances are also looking to have roles 521 and 457 roles filled respectively.

Universities in the region are known for their excellence in research and innovation across global issues and themes.  Queen’s University Belfast’s The Institute of Electronics, Communications and Information Technology (ECIT) and Ulster University’s The Intelligent Systems Research Centre (ISRC) are named among the world’s most recognised and technologically ahead research centres.

International experts have claimed that Ulster University is among the top 25% of universities in the UK with leading global research based on research power. Also, 72% of its research activity is considered world-class and internationally matchless. The university is aimed at moving further ahead in the journey of undertaking interdisciplinary research across the themes of     social renewal, healthy communities, sustainability and creativity and culture.

Queen’s is also recognised as one of the leading research intensive universities in the UK and has a global reputation for excellence. In fact, the 2014 Research Excellence Framework (REF)  ranked the university 8th in the Uk for research intensity. The university also boasts having acquired £100m between 2016 and 2017 in new research awards and ranked #1 in the UK for entrepreneurial impact in the Entrepreneurial Impact Ranking, Octopus Venues 2020.

Also Read: What is a Good GRE Score & How is it Calculated?

Alongside an extraordinary education system, Northern Ireland’s universities are also known for their safe and state of the art facilities. The multi-campus public university - Ulster University hosts over 27,000 students across its four campuses in Belfast, Jordanstown, Magee and Coleraine. The university is uniquely placed in the midst of local communities letting students naturally become a part of the community and contribute to its social, economic and cultural development. Courses are also offered at its branch campuses in Birmingham, London and Qatar.

Queen's University Belfast (also known as Queen's or QUB) is also located right at the heart of Belfast’s culture. With an investment of £700m over a 20-year capital development program, the university has some of the best facilities on campus across business, health sciences laboratories, engineering and computing. It also has an award-winning library - McClay Library, on which Queen’s has invested £50m to blend traditional features and the latest technology.

Brexit or the UK’s EU Exit has also resulted in further attention on Northern Ireland as an attractive destination for investment. Consumers and producers can now retain custom-free access to the EU market and EU businesses would also benefit from Northern Ireland in terms of future investment. In such an ideal business environment where both sides benefit, more jobs opportunities across fields are likely to crop up.

Between January and November last year, investors announced 36 projects in the region, a 5.9% increase from 2019. The region’s IT and software services alone saw a 46.7% increase in projects than in 2019.

Like other parts of the world, the start-up scene in Northern Ireland has also seen immense growth over the past few years. It has drawn the youth to start interesting and new businesses or work for them. A Global Entrepreneurship Monitor report said that around 30% of the respondents were of the view that Northern Ireland had good opportunities for start-ups. Another report released by the Enterprise Research Centre pointed out that 3% of the start-ups in the region were able to cross turnover of a GBP 1 million in the first three years, compared to 1.9% nationally.

This rise in start-up interest could be attributed to a series of initiatives that the country offers to early-stage start-up founders. Some of these include the nine-month-long Proper Program for founders, the Development Grant, the Interim Manager Grant, the Innovation Voucher, and more.

Top Universities in Northern Ireland for You

Here are the top universities in Northern Ireland where you can pursue your higher education:

You can write to us at abroad@collegedekho.com or call us at 785 9990 990 and clear out your doubts regarding higher education in Northern Ireland or admissions to its universities.