Wondering why so many US universities are abandoning SAT/ACT scores for their admissions? Let us take you through the reasons why universities in the US are going test-optional along with the list of USA universities that have become either Test-Optional, Test Blind or Test Flexible. 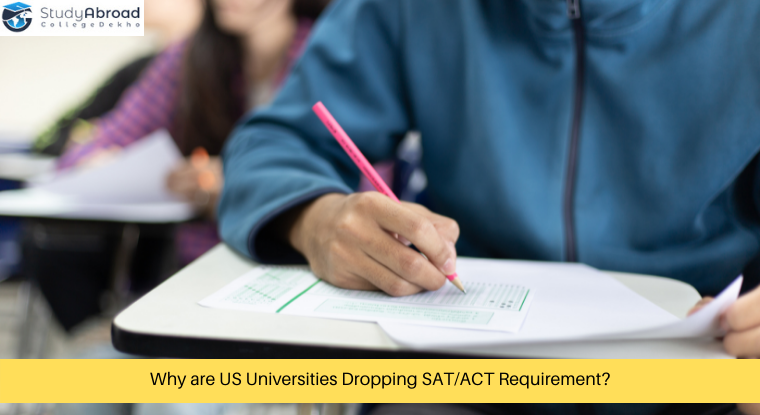 Why are so many US colleges going test optional? A number of reasons have been attributed to this and while the tally keeps increasing, some universities plan on doing so on a temporary basis and some want to forgo the tests completely. MIT has recently announced reinstating ACT/SAT scores for 2022-23 admissions, only making us further question if one should take the ACT/SAT to study in US.

What started in 1969 when Bowdoin College started the practice of making test scores optional is now a movement which includes hundreds of US universities. US admissions experts are of the opinion that the pandemic only hastened the test-optional admissions. However, one should first understand what are test optional, test blind and test flexible colleges.

Before we get to the big question, here’s what we need to know what test-optional, test-blind, test-flexible colleges actually mean.

Test Optional Colleges: Simply put, test-optional colleges allow students to decide whether or not they wish to appear and send SAT and ACT scores. These colleges will consider their SAT or ACT scores for admission but those submitting standardized test scores will not be given priority over those not doing so.

Test Blind Colleges: Colleges that have gone test blind will not consider an applicant’s ACT or SAT scores for their admission evaluation even if they submit it.

Test Flexible: A test-flexible college allows students to submit scores of other tests instead of the SAT or ACT such as an International Baccalaureate exam, one or more SAT Subject Tests or an Advanced Placement test.

Our Ivy League mentors are endowed with years of experience to get international students admitted to the top universities in the USA. They further assist students with preparing LORs, SOPs, US visa interviews and so on.

Why Many US Colleges are Going Test Optional?

College Board data show that nearly 2.2 million high school graduates took the SAT in 2019, up from 2.1 million in 2018 and over 1.7 million students took the ACT in 2019, a drop from 1.9 million in 2018. Even so, thousands of top universities in USA now have chosen not to review ACT/SAT scores for admissions to undergraduate studies. Before finding out what colleges don't require sat or act for class of 2023 Let us find out why test-optional colleges for international students started in the first place.

Chief complaints filed by testing critics hold that these standardised tests are racially biased and put wealthy students at an advantage. According to a 2019 lawsuit, standardised testing is biased against the poor and mainly Hispanic and Black students. Data show that in 2018, combined scores for White and Asian students averaged 1100+, while other groups averaged below 1000. With regard to income, an analysis conducted in 2015 found that students with family income above USD 200,000 scored highest while those with family income less than USD 20,000 scored lowest. Critics are of the view that if universities stop reviewing ACT/SAT scores, it would correct inequities faced by students from these backgrounds.

Increase in Enrollment and Overall Applications

An increased number of applicants lead to a lower acceptance rate, which further results in a higher ranking. Also, only applicants with high scores on the ACT and/or SAT would report the scores, which will inflate the average test scores for the schools.

Critics often argue that standardized testing does not ensure fair enrolment and equal opportunity. Dropping SAT and ACT scores would not just be reliable in identifying students who have the potential to succeed but would also ensure more fairness to all applicants. If a student has a good academic record in high school, they might not have to submit their SAT or ACT scores to stand out.

New research, based on simulations using real student applications at competitive institutions, found that dropping the requirement would lead to considerable gains in the percentage of Latino and black students and other racially and ethnically underrepresented groups as well as economically disadvantaged students. The gains are higher for those that have decided to drop the requirement entirely, as opposed to those that have gone test-optional.

A Poor Predictor of College Success

Students often tend to believe SAT and ACT scores are the deciding factors in an undergraduate admissions decision. However, they are only one aspect of their application, apart from grades earned in high school, community involvement, participation in sports and extracurricular activities and so on. Education experts believe that the most significant predictor of academic success in undergraduate studies is a student’s high school performance.

In fact, standardized tests provide very little incremental value beyond a student's high school GPA. A study also revealed that going SAT and ACT optional would lead to classes for students with higher GPAs and dropping the test entirely would result in higher levels of achievement in college.

Given below is the list of some of the US colleges that don't require SAT/ACT scores in 2023-24 admissions:

Research by ACT Inc, administrator of ACT, showed that many schools will continue with their test-optional policy even after the Covid-19 pandemic comes to an end. Also, as mentioned, dropping SAT and ACT testing as admissions criteria has long been in the picture and they have also drawn quite the criticism for promoting bias and so on. However, the College Board has announced that it will take measures to make the SAT more flexible.

Will US Universities Re-instate SAT/ACT Scores?

MIT is one of the top US universities that has reinstated SAT/ACT scores criteria for admission to Bachelors in 2022-2023.  The highly technical nature of their curriculum has made MIT reverse the earlier decision to suspend the use of standardised scores.

The non-profit organisation ACT that administers the test said that the test scores aid in improving admission decisions and also help to determine student support and placement. Priscilla Rodriguez, vice president of College Readiness Assessments at the College Board, commented that contrary to elite resources like extracurriculars and legacy status, SAT is "available to all students".

However, the majority of the schools will remain test-optional or test-blind for 2023 admissions. It is suspected that some other universities will follow in the footsteps of MIT.

Are you looking to study at one of the USA’s top universities? Then look no further! Find out the best universities and courses in the USA with the help of our Study Abroad Expert team.

Have Further Queries Regarding SAT/ACT Requirement?

Which Intake Season to Choose: Fall or Spring?