With successful vaccine rollouts and a looming threat over the economy of the country, Australia is beginning to mull over reopening the borders. International students may soon enter the country through new pilot initiatives that are being approved by the federal government. 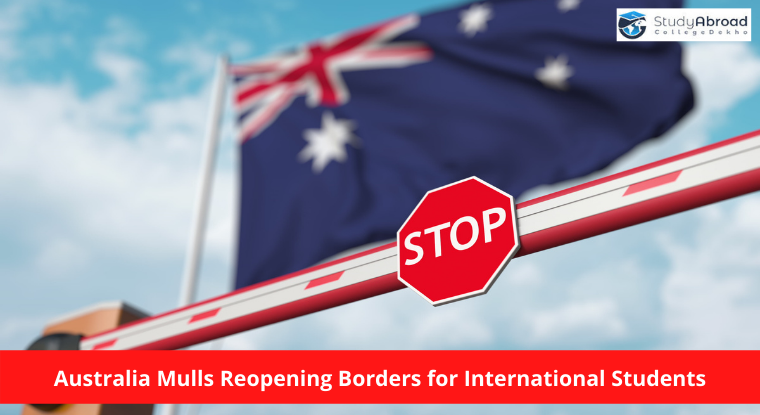 The successful vaccination programmes rolling out across the world, Australia is starting to contemplate reopening the borders for vaccinated travellers as part of its student pilot initiatives, as per local media.

Additionally, the Australian and New Zealand Governments have announced that the quarantine-free travel between the two countries will commence this week.

Scott Morison, Prime Minister of Australia, stated that the key to establishing “travel bubbles” are compatible vaccination recognition systems with countries such as Singapore, South Korea, and Japan, the local media reported.

Dan Tehan, the Australian Trade Minister, explained that while the country is in “no rush” to relax border restrictions, discourse between Australia and Singapore are to continue regarding the possibility of travel bubbles. Tehan highlighted that the travel bubbles with Singapore will take place if it is safe to do so, while in the meantime, processes that would facilitate safe travel bubbles will be looked into.

Completing his statements, Morrison added that fully-vaccinated international students could be helpful in testing out a ne traffic light system trial to facilitate international arrivals.

Will Opening up Australian Borders be Helpful?

The pandemic has resulted in drastic impacts, especially negative impacts in the Australia Higher Education sector. Institutions in New South Wales and South Australia have witnessed drastic declines in student enrolment numbers, during the COVID-19 pandemic.

A decrease in international student enrolment results in a decrease of annual income, as revealed by UNSW, which recorded a decline of $19.4m in annual results as compared to 2019. Meanwhile, the University of Wollongong conducted a study, which highlighted a “headline result of approximately $40m, with a decline of onshore international student enrolments, thus “scar[ring] the budget position for several years” stated the institution.

However, this downturn was not witnessed by all universities in the country. The University of Adelaide revealed a “better-than-expected” overseas student enrolments in 2020. In its annual report released late in May, the University recorded an international student revenue amounting to $254 million, same as in 2019, while it saw “reduction against budget targets of $293 million”, sources claim.

Vice-Chancellor and President, Peter Høj, revealed that International commencements have appeared to be down by 37% while it was down by 17% in semester 1 itself. However, he added that further significant losses will lead to sustained losses for Universities in Australia for a minimum period of 3 years.

Holding back on opening the borders to international students can lead to a crisis-like dimensions which can threaten the country’s research base drastically, especially when the time had been right to utilise it to become a “more resilient economy with an enhanced sovereign capability”.

However, Victoria’s Chief Health Officer, Brett Sutton, stated that they do not wish to import any case of the Delta variant, which has been report in Singapore, a country Australia is considering for the “travel bubble”.

Sutton further commented that the vaccination coverage in Australia may facilitate the reopening of borders eventually. As per current data, 6,590, 741 vaccine doses have been administered, however, the country has hit a few snags.

Sutton urged the citizens of Australia to vaccinate themselves so that the country would be open for the world to travel to and jump-start the education, tourism and other sectors that have been affected by the border closures.