Over 70,000 Foreign Medical Graduates Wait for Internships to Help India Amid COVID-19 Crisis

As COVID-19 cases spike to record highs in India, thousands of Foreign Medical Graduates (FMGs) are looking forward to enrolling themselves in internships to serve the country. 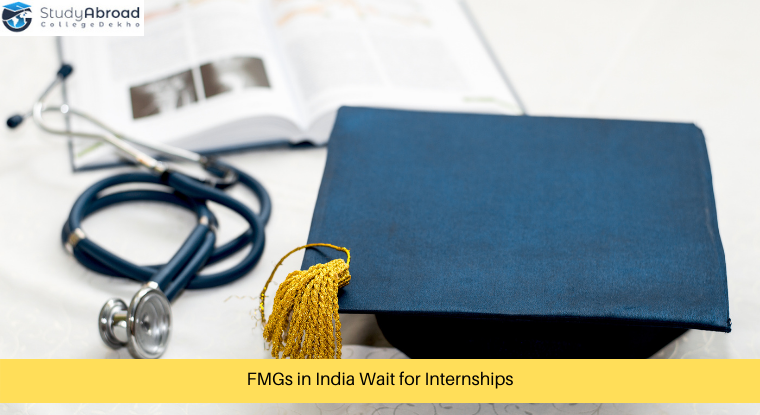 As a fearsome second wave of COVID-19 engulfs India, over 70,000 Foreign Medical Graduates (FMGs) wait for internships amid the pandemic. In its new draft of regulations, the National Medical Council (NMC) has announced that FMGs will get a license only if they fulfill the required eligibility criteria.

The draft said that an individual with primary medical qualifications, who wishes to practice medicine in India needs to qualify the Foreign Medical Graduate Examination (FMGE) till the time the National Exit Test (NExT) becomes operational.

Also Read: Admissions Open for Innovative Educational Pathway to Practice Medicine in India, US, or UK

A request has been made to keep NEXT 1 and NEXT 2 the same for both FMGs and Indian Medical Graduates.

However, the IFMS Welfare MCI Gurukul Trust wrote to the Indian Prime Minister, Health MInister, Chief Ministers on April 15, urging them to reduce the passing percentage to 30%, a one-time relaxation to deal with the shortage of MBBS doctors in the country.

The issue was also voiced by BJP MP Tapir Gao in a Parliament session in March 2021.

A foreign medical graduate from Osh State University, Kyrgyzstan, Ayush Vaishnav, said that according to the guidelines of the World Health Organisation, there should be one doctor for every 1,000 patients. However, India’s current ratio, during this crippling crisis, is 1 to 1,456.

President of the IFMS Welfare MCI Gurukul Trust Dr Bhupendra Armaan Chourasiya pointed out that if the Indian government decides to reduce the passing percentage to 30% for the last few years, the country will be able to get more than 50,000 MBBS doctors in a single day. In addition, they will work for free for a year as interns.

According to the National Board of Examination’s (NBE) data, not more than 15% MBBS students passed the Medical Council of India (MCI) exam.

The Trust further highlighted that an approx figure of over 70,000 are passouts, who are looking forward to clearance, while about 40,000 are studying.

Talk to Our Expert