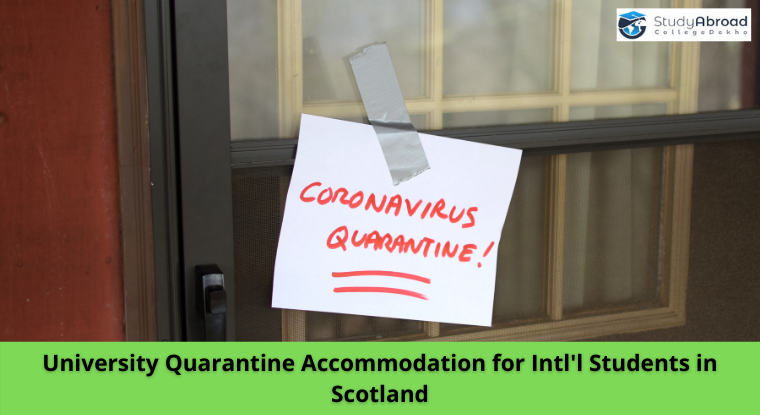 Recent reports have revealed that a couple of Scottish Universities will be permitted to quarantine international students from “red-list countries”, provided decent success is witnessed from a pilot scheme.

As per local media, the Scottish Government has greenlit a plan that allows Scottish universities to convert on-campus accommodation into quarantine facilities for international students if the safety and quarantine measures match those at quarantine hotels in the country.

However, this plan will only be allowed provided a pilot scheme, which facilitates two anonymous universities to test the scheme and ensure its feasibility.

With the present UK Travel Regulations for international students, those travelling from red-list countries are mandated to quarantine in government-approved hotels, with a massive bill of £1,750, which is an expensive ordeal for most incoming students.

Previously, the local media had revealed that a few eager universities spoke to the Scottish Government regarding the “hotel quarantine” pilot in July to facilitate the influx of foreign students expected to start studying in September.

While the Scottish Government is yet to confirm their plans with the pilot scheme, a statement from a spokesperson revealed that the government had been in talks with the universities to figure out if student accommodation could replace hotels for managed isolation. The spokesperson further revealed that guidance is being drafted for a pilot scheme with the help of two universities that have expressed interest in the plan.

The Spokesperson added that the ministers have agreed to convert student accommodation into quarantine facilities (managed isolation) for international students from red list countries. However, the universities are to prove that their student accommodations meet the public health protection assurances equal to that offered by the quarantine hotels.

Vivienne Stern, UUKI Director, commented that the move brings good news, however, the same may not be expected from English Universities. She also pointed out that currently, the move is in the discussion phase, where information is being shared, as many questions still remain unanswered.

The spokesperson added that the international travel situation continuously changes depending on the situation, therefore, the top concern is the UK and Scottish governments’ ability to plan and ensure sufficient capacity to accommodate students from red list countries in August and September.

While many universities have shown eagerness to participate in the pilot scheme, some do not possess the right facilities to provide the same protection that students will receive in hotels. Others, however, are keen on taking part in the pilot programme and provide safe and secure accommodation to students from red list countries.