With a successful COVID-19 vaccine rollout, Australia may open its border to welcome international travellers, including students. However, other parameters such as the COVID vaccine strategy opted by other countries, etc will also affect this decision. 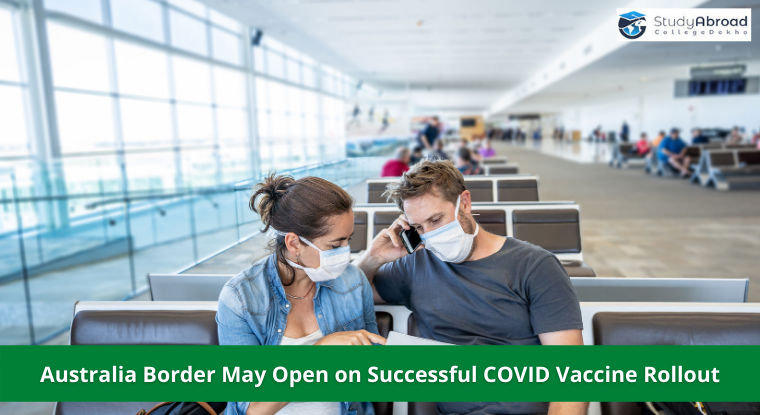 Among the good news for international students in Australia, the possibility of Australian borders finally opening up may come true in the near future. Sources state that with a successful rollout of the COVID-19 vaccine across the world, Australia may open its borders to welcome the international student cohorts stuck outside the country for the past year and commence their studies in Australian Universities.

Upon questioning, Prime Minister Scott Morrison stated that the lifting of its ban on foreign travellers entering the country could be “very possible”, once the vaccinations have been delivered across the world successfully.

In a statement from Prime Minister Morrison, he reiterated his belief in taking the process one step at a time. He believes that once the vaccination process is on the move in Australia, the manner of life ay change. However, he further added that reopening the borders will also depend on the success of COVID-19 vaccine programmes held across the world, which includes India.

Morrison further states that it is right to expect that the manner in which the virus is being managed will change with the successful rollout of the vaccine in Australia and the world over.

In terms of reverting back to normalcy, Associate Professor Dr Holly Seale from the University of New South Wales stated that Australia does not wish to put undue pressure on other countries struggling to deal with the different variations of COVID.

She also stated that people from within Australia and outside are desperate to travel, which she suggests could be a possible opportunity that the government could incentivise. Seale added that dialogue regarding such topics is becoming increasingly crucial and providing answers to numerous questions, which can lead to people getting the vaccine.

However, other members of the parliament have vocalised their opposition to the slow and delayed processes undertaken by the government. Stakeholders have emphasised their intention of helping international students travel back to the country and participate in their programmes, for which the students have already paid.

Earlier this year, the government had announced that the COVID-19 vaccine will be made available through a 5-phase vaccination strategy, which includes international students. Reports state that 150 million vaccine doses for COVID-19 have been secured by the country. The vaccine rollout, which will be offered free-of-charge, including international students, will start operations from 22nd February 2021 and is expected to last till mid-October this year.