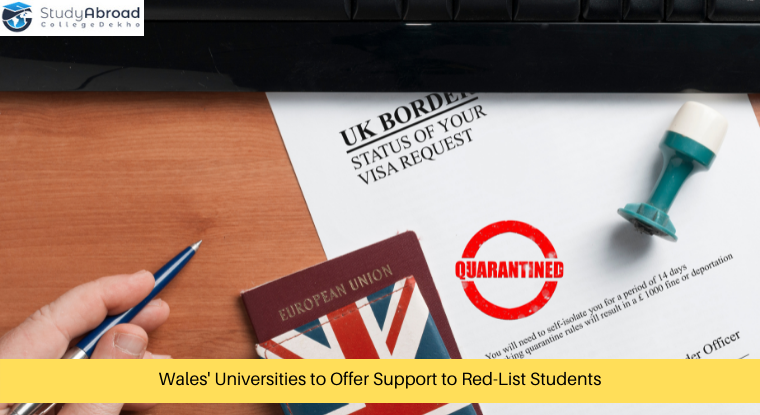 Some universities in Wales have offered to cover quarantine costs worth £1,750 for students coming from red list countries. According to current UK guidelines, students from India, Egypt and Kenya are required to spend 10 days at a quarantine hotel in England.

The Welsh government has urged international students to ask their universities for support.

The eight universities in Wales have over 25,000 international students.

Universities including Bangor University, the University of South Wales, Cardiff University and Swansea University have said they would fund the quarantine costs in full for red list students.

Cardiff Metropolitan University and the University of Wales Trinity Saint David (UWTSD) said that remote learning would remain available until students can pay for it themselves. However,  Cardiff Met further said it was looking at all options to support students and that

Aberystwyth University has said it would offer up to £1,000 per student. Wrexham Glyndwr University has not announced its quarantine fees policy as of yet.

The National Union of Students (NUS) Wales said it was unfair that support for students varied, despite all international students paying the same amount of tuition, between £10,000 and £20,000 per year.

NUS Wales president Becky Ricketts said that the Welsh government should be open to paying the costs or else all universities should “step up”.

Vice Chancellor of Cardiff Met Cara Aitchison said students from red-list countries would be arriving in Wales after having quarantined in England.

Prof Aitchison further said it had to be an individual student’s decision as to when they wanted to travel to Wales as their home country might also have their own unique and changing circumstances.

She said the government of the UK had now allowed international students to delay their journey until April 2022 if they so wished, and begin their course online from their home country.

The Welsh government acknowledged the problem of quarantine costs, saying it could be a financial burden for some students, for which they should speak to their respective university.

It said universities in Wales were considering how they could help international students start their courses online and enable them to delay travel if case rates and risks in their home countries were high.