A federal judge has rejected the changes introduced by the Trump administration that aimed at limiting the number of visas issued to skilled workers in the US every year. Department of Homeland Security (DHS) deemed the same a priority because of job losses due to the Covid-19 pandemic. 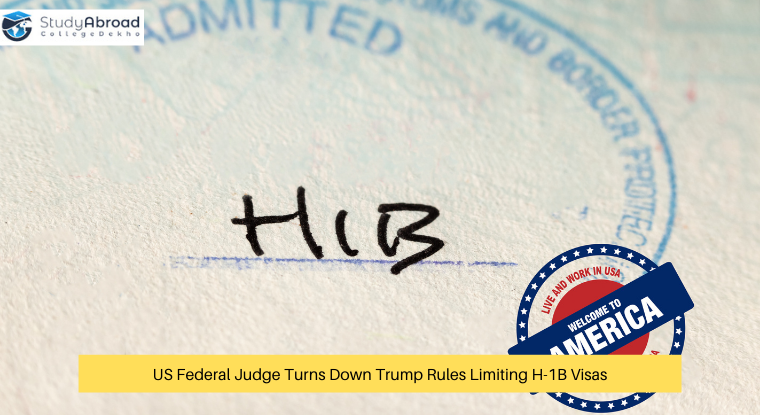 A federal judge has taken down two rule changes introduced by the Trump administration in October this year meant to curtail H-1B visas. The changes applying to the H-1B programme were announced to pose salary requirements on companies employing overseas skilled workers and limits on speciality occupations.

The Department of Homeland Security (DHS) deemed it a priority because of job losses in the country due to the Covid-19 pandemic.

The H-1B visa allows companies in the US to employ graduate-level workers from outside the country in occupations in specialised fields including finance, engineering, IT, mathematics, science, medicine, accounting, and architecture.

US District Judge Jeffrey White in California, after a legal challenge by the US Chamber of Commerce and universities, ruled that Covid-19 was not a “good cause” for the DHS and Department of Labor to not comply with the regulatory procedures.

The judge also said that the argument put forward by the Trump administration that changes were suggested as an emergency response to the loss of jobs amid the pandemic did not hold as the administration had presented this idea before.

White wrote that the pandemic is not in control of the defendants, although it was within the defendants’ control to take necessary actions earlier than they eventually did.

Currently, the immigration law allows a total of 85,000 immigrants to get new H-1B visas every fiscal year.

However, a report by Associated Press and US News revealed that one-third of H-1B applicants in recent years would be denied visas under the new rules.

Universities such as the California Institute of Technology along with the US Chamber of Commerce said that not enough time was given for the public to comment on these changes.

The Chamber of Commerce said that the changes proposed could disrupt the operations of many businesses and that several companies in the US across industries would be relieved by the ruling.

The American Council's director, government relations Sarah Spreitzer said that they were very pleased that California's courts struck down the visa rule changes.

It was evident that the Trump administration had made it happen without following the APA rules as it went to an interim final rule before putting it forward for discussion with stakeholders, she added.

While one rule took effect immediately, the other one was set to take effect on December 7, which was very concerning as it would have impacted university hiring in the next year, she continued.

Spreitzer stated that the Trump administration might challenge the decision of the court but the same is uncertain with the Biden administration taking over in January 2021.