More and more Higher Education Institutions are starting to put their trust in education agents to recruit international students. While some raise concerns over unethical practices, AIRC and other HEIs vouch for industry-standard practices and good relationships with agents. 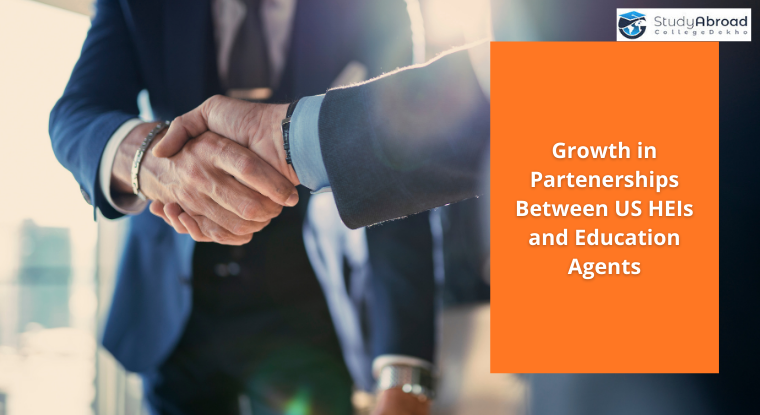 A large number of Higher Education Institutions in the US are partnering up with education agents across the world, which is continuing to grow, a survey revealed. The American International Recruitment Council (AIRC) and the National Association for College Admission Counselling (NACAC) carried out this study.

The AIRC and NACAC study revealed that 49% of the institutions that participated are, currently, in partnership with education agents across the world in a bid to recruit prospective international UG students.

Lindsay Addington, the Director of Global Engagement at NACAC, stated that the number of institutions seeking partnerships with agents seems to have increased over the past years, according to the survey.

Further surveys on admission trends conducted by NACAC in 2017 and 2018, highlighted that 36% of the participating institutions were in partnerships with education agents, while 25% were contemplating partnerships.

Executive Director of AIRC, Brian Whalen, explained that the “growing” partnerships with education agents seem to be a result of the effectiveness and benefits of such partnerships with agents during the pandemic.

He added that the institutions acknowledged the “effective[ness of] on-the-ground representation that additional agent partnerships brought forth, especially since global travel for their university admission staff was curbed.

Supporting this trend is the new Office Administration in the US, under which the international student flow is expected to increase. Whalen stated that the HEIs have taken the opportunity to partner up with the education agents, which is now being seen as crucial.

In her statements, Addington stated that the open-ended response options in the survey allowed the institutions to reveal that few of these changes were already in the words before the pandemic. The survey also suggests that the pandemic may have been the fuel to the accelerated growth, however, there is no certainty in that fact.

Addington also suggested that the pandemic may have, however, led to improper vetting and researching regarding the quality of agencies and which would be perfect for the institutions. Additionally, realising which institutions possess the necessary resources to handle such partnerships.

Among the popular reasons for not partnering with agents, 47% did not wish to support a per-student commission model, 23% were afraid of inaccurate information posted by agents about the institutions, while 18% were concerned about agents convincing students to choose certain institutions due to commission incentives.

While the concerns can be a deterring parameter for over half the institutions, experts ar an AIEA’s annual conference claimed that these issues and concerns can be alleviated. They stated that the solutions to such concerns can be found in non-transactional relationships and comprehensive training provided to agents.

Instead of looking at the partnerships as merely transactional relationships, where if the numbers are not good and the deal can be broken off, building a relationship with the agents where they feel part of the institutions, thus resulting in a better representation of the university from the agents, stated senior lecturer Pii-Tuulia Nikula from Eastern Institute of Technology New Zealand.

To solve the issue of inaccurate information, providing comprehensive training to agents. Not just in the beginning, but throughout the partnership will be beneficial.

Eddie West, the Assistant Dean of International Strategy and Programmes at the Global Campus of San Diego State University, stated that the university that chooses a more hands-off relationship with the agents are likely to face unsatisfactory results. Keeping a more hands-on approach with active engagement, basically treating them as partners, will help yield better results, he added.

Whalen stated that an investment of time and a commitment to keeping the industry standards high by the agencies and the institutions will result in establishing trust, familiarity and an effective working relationship.

He further added that highlighted the important role that agencies can play by offering on-the-ground and effective marketing, orientation and advice to international students before they travel to the US.

Assuring the institutions that are worried about unethical practices undertaken by agents, Whalen highlighted that the AIRC-certified agencies are dedicated to their commitment to high standards and providing service for the best interests of the students and the institutional partners.

Whalen stated that the AIRC’s 12-year history is a statement to solving issues through meeting the “industry standards, best practices and [keeping] a commitment to doing what is right for the students”.