A Letter of Recommendation (LOR) is a document used to add extra value to one's college or university application. Scroll through to learn all about an LOR, its types, format of a good LOR, tips to make an LOR request and so on. 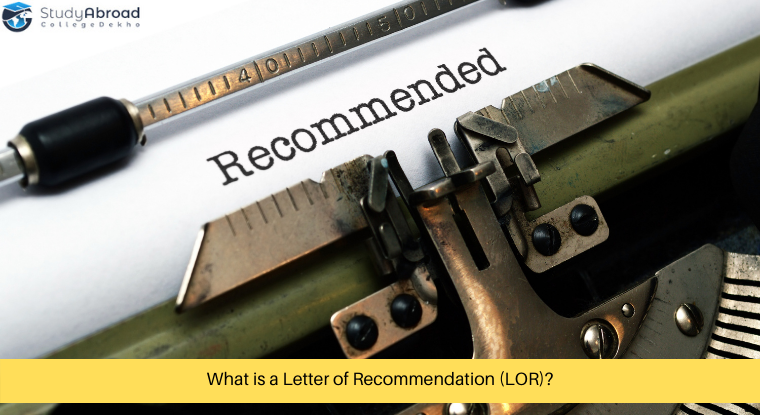 While the importance of an LOR is unquestionable, it can feel like a big responsibility and intimidating to begin with. However, with a considerable amount of planning, time and effort, applicants can manage to get great letters of recommendation.

Many universities often provide an LOR template or format for all applicants to follow, whereas, some leave it to the applicants and their referees to explore. This article will shed light on the basics of an LOR, types of LORS, its format or structure, tips to make a letter of recommendation request and so on.

What is a Letter of Recommendation?

A letter of recommendation or a recommendation letter is a document used to add extra weight to one's college or university application. In an LOR, the writer assesses the qualities and potential of an applicant or the person being recommended to join a particular course or university. This often includes details about the applicant’s personality, community involvement, work ethic, academic achievements, character references, personal details and more.

Types of Letter of Recommendation

Broadly, letters of recommendation can be divided into the following three types. Here is an overview of each of these three types along with information about who uses them and why and whom they ask to write an LOR:

Format of a Good LOR - Content and Page Layout

A good LOR would have two factors in check, first is the content format and second is the page layout. Given below is the format of a letter of recommendation, mentioned in detail:

So, before we structure our LOR, we need to understand a great LOR focuses on seven basic sections or parts:

This comes in the letterhead, which is right at the top of the page. What it will include is information such as the applicant’s name, address and contact information. In case one does not have a letterhead, they can put this information on the top left corner of the very first page.

Or else, add information like current date, addressee name, addressee title, university name and address on the top right side of the page.

Like any other letter, one needs to begin an LOR by addressing the reader or the person or body to whom the letter is addressed. It is extremely important to first learn who is going to read the letter so it can be tailored accordingly. In case, the letter is to be sent to multiple universities or multiple programs, the letter can be addressed by writing “to whom it may concern”.

Also Read: List of Universities Waiving Off GRE, GMAT for Masters Admissions in 2022

From qualifications, extracurricular activities, academic specialities, personality to skills and awards or achievements, this part of the recommendation should talk all about the applicant. The applicant should make sure to provide the recommender with all the required information such as their transcript, GPA, class participation, challenges met, projects, hobbies, updated CV, list of achievements, extracurricular activities, awards of recognitions and so on.

It should also include the student’s area of interest or which subject they are good at or interested in. It should be able to persuade the reader that the applicant is genuinely passionate about the program that they are applying for.

Apart from these, the letter should further have details about the applicant’s personal qualities, attitude or zeal to move forward or improve and excel in the field of study. Another important point to mention here is the student’s future career goals or aspirations which will make them an important part of the university.

Letters that compare the applicant with their academic peers are often the most useful.

Part 5: How the Applicant Will Add Value to the Program or University

The writer, here, may try and endorse the applicant in a subtle yet direct way. An LOR becomes more effective when the applicant’s academic background is in some way related to the university’s mission or the program's requirements.

Part 6: Conclude with a CTA

The writer may also encourage the reader to get in touch with them should they have any questions or queries about the applicant.

The LOR can be closed by adding the recommender’s signature along with their contact details.

Page Layout Guide for an LOR

Most applicants often ignore paying attention to page layout or page format of an LOR. Although the content is more important, a good presentation of it will make it even better.

Tips to Make a Letter of Recommendation Request

How one requests and to whom one requests a letter of recommendation influences what the recommender writes in the letter to a great extent. Here are some of the tips when requesting LORs:

Common Mistakes While Getting an LOR

Here are some of the common mistakes that applicants make while submitting or getting an LOR:

You may write to us at abroad@collegedekho.com to raise their queries about letters of recommendation, if any.