Here is all about both H-1B and EB-5 visas, which is better for Indians aspiring to study, work and further reside in the US. With a lot of factors at play, here is a detailed comparison between the two to help you with your vital decisions when moving to the US for higher education. 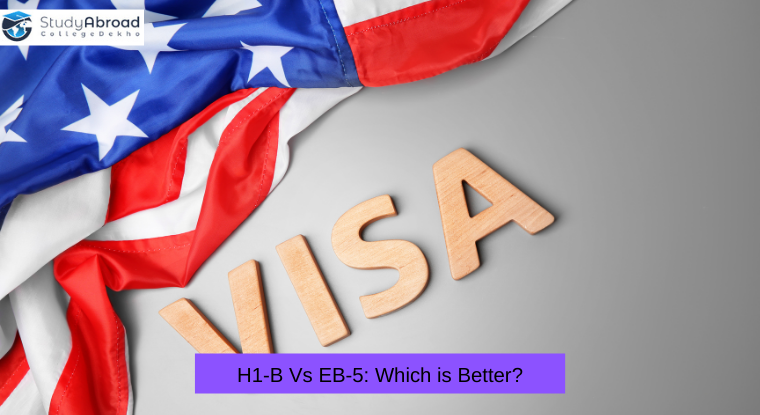 According to the 2019 Open Doors Report on International Educational Exchange, the number of Indians studying in the United States surged to 202,014, accounting for a 3% increase from the previous year. Being one of the biggest student markets for the US, India is home to a great number of students who apply for H1-B or EB-5 visas every year.

The not-for-profit association, Invest in the USA (IIUSA) also recently highlighted that the demand for EB-5 visas in India rose 400% over three years between 2016a and 2019.

While both H-1B and EB-5 visas are immensely popular among Indian students, they do look similar at first glance. With a lot of factors at play while talking of the two, here is a detailed comparison between them to help you with your vital decisions when moving to the US for higher education.

The H-1B visa is a work permit in the United States under the Immigration and Nationality Act, letting foreign workers work at American companies. The worker should be employed in a speciality occupation, for which the employer was not successful in finding a US native. The highly specialized field should include but not be limited to biotechnology, architecture, engineering, chemistry, computing, statistics, medicine and health, physical sciences, journalism, and more. It has been further projected that the US is likely to require highly skilled professionals in the Science, Technology, Engineering, and Math (STEM) fields in the coming years.

Apart from speciality knowledge, an H-1B applicant must also have held a bachelor’s degree or prior work experience. The visa allows the visa holder to stay in the US for three years, which can be further extended to six years.

Created in 1990, the EB-5 Immigrant Investor Visa Program permits eligible foreign investors to become permanent residents of the US. This permanent residency would be evidenced by a Green Card, for which the immigrant must invest at least $900,000 in a Targeted Employment Area (TEA) and employ no less than 10 American citizens.

This visa program was introduced in order to boost the country’s economic growth along with foreign investments. As of 23 April 2020, 78,278 foreigners have applied for the EB-5 visa.

An applicant, if found eligible, would receive an EB-5 Green Card with 18 to 20 months. According to the latest data sourced by IIUSA, in FY 2019, Indians formed the biggest chunk of EB-5 applicants, overtaking China and Vietnam.

Note: “TEA” is defined as rural areas or areas with unemployment 1.5x of the national average.

Also Read: List of Countries Which Have Banned International Students in 2021

H1B vs EB5: A Quick Comparison

Given below are the highlights of both H-1B and EB-5 visas to have a quick understanding of the basic differences between the two:

H-1B or EB-5 Visa: Which One Should You Choose?

Diving deeper into the differences between the two, let us now have a close look at the bigger aspects of both H1B or EB5 visas:

There is an annual cap for both EB-5 and H-1B visas. The current annual statutory cap for the H-1B visa program is 65,000 visas, with 20,000 more visas earmarked for foreign professionals who graduate from a designated US institute of higher learning with a master's degree or doctorate.

The EB5 programme has an annual cap of 10,000 visas, with 700 visas per country (7% per country cap). At least 3,000 of the total visas are set aside for I-526 visa applications based on investments in projects financed by a Regional Centre.

In India, there has been a growing demand for EB-5 visas particularly from Chandigarh, Ahmedabad, Gujarat, Mumbai, Punjab, and Delhi.

While H-1B visas are temporary visas valid for three years, EB-5 visas promise permanent residency in the US. After completion of three years, one can extend the validity of their H-1B visas for another three years and when the maximum duration of stay has expired, they would have to leave the country or apply for another status.

EB-5 visa applicants become permanent residents after their I-526 application has been approved by USCIS (United States Citizenship and Immigration Services). This gives them a two-year conditional permanent residency, allowing them to come to the States for two years.

After this period ends, the investor can apply for an I-829 application, which gives a full permanent residency to the investor, their unmarried children under the age of 21 and their spouse. Apart from letting them work and reside in the country, they may also apply for full US citizenship after five years.

H1-B visas allow the visa holder to bring their dependent family members to the US during their length of stay in the country. For this, they would have to apply for the H4 visa, which allows them to open bank accounts, go to school, receive a social security number and a driver’s license. Further, they can work in the US after applying for an EAD, short for Employment Authorisation Document.

Conversely, an EB-5 visa provides Green Cards for the entire family including the applicant, spouse and children under the age of 21.

An EB-5 visa allows the holder to do as he/she wishes - work, study, establish a business, or retire in the US. Contrary to that, the H1-B visa program limits one to a great extent in case of employment. In case he/she loses his/her job in the States, he/she would be asked to leave the country or manage to get transferred to another qualified US employer.

Is the EB-5 Visa a Winner for International Students?

Access to More Scholarships and US Government Aid: Those on an EB-5 visa may apply to US government aid or scholarships that are otherwise unavailable to international students. This further helps with nudging the overall competitiveness of getting an international merit-based scholarship.

Higher Acceptance Rate: An international student on an EB-5 Visa has a higher chance of getting into one of US’ leading universities as an American resident. On the other hand, those with other visas are forced to face a cut-throat competition to secure admission to top universities like Harvard, MIT, Cornell, to name a few.

Easier Path to Citizenship: An international holding an EB-5 visa gets a direct Green Card as opposed to other visa categories in the US. Also, after receiving a green card, one can apply for citizenship after five years and upon meeting certain criteria.

A Larger Pool of Internship and Post-Graduation Job Opportunities: A growing number of organisations in the US refrain from hiring international students who are on visas other than the EB-5 visa. This is because they want to invest their time on U.S. Citizens and Green Card Holders. This further contributes to higher salary, promotions and better job profiles.

What is even sad is the fact that very few H1-B visa applicants make the lottery and get to stay and work in the US after graduation. While an Indian H1B visa holder from India has to wait several years to get an employment-based green card, those on an EB-5 visa petition need to wait only for a few years.

One of the biggest benefits of both the H1-B and EB-5 visa programs is that they are both open to citizens of any country. Having said that, H1-B has been on the news since forever, especially during the presidency of Donald Trump, making it slightly controversial and risky on several fronts. Also, amid the disruption caused by the Covid-19 pandemic, President Trump had asked for limitations on the entry of immigrants into the US.

What makes EB-5 a better choice for Indian study abroad aspirants are advantages such as a shorter wait time, higher university acceptance rates, an unrestricted work permit, no lottery, among other things.

In case you have further questions about H1-B or EB-5, please write to us at abroad@collegedekho.com.