SAT vs. ACT: What is the Difference & Which One is Right For You?

Wondering how the SAT or ACT are different or if they are different at all? Check out a detailed comparison of the two most popular tests attempted by students applying to foreign universities. 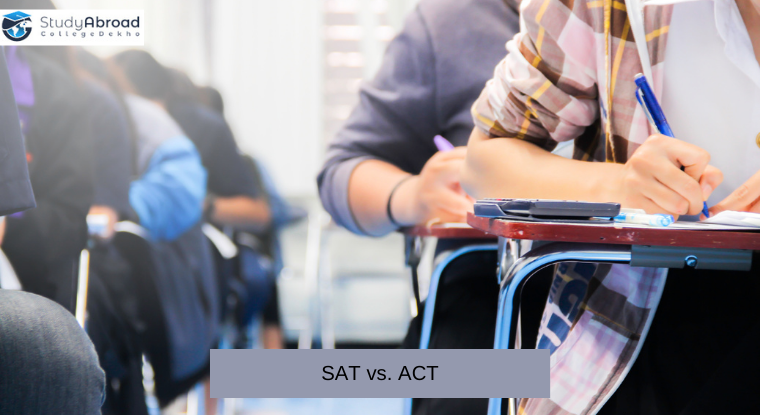 Each year, the scores of either the ACT or SAT or both lets nearly 4 million students worldwide transition to college or university. With the increase in the number of students appearing for these standardized tests, many often find themselves in a quandary as to which tests amongst would be ideal for them.

Both the SAT and ACT have been adopted by thousands of higher education institutions not only in the United States but also in countries like the UK, Canada, Australia and more.

Although there is no advantage of taking one test over the other, it is important that you have a fair idea of the differences between the two and identify which test would suit you and your strengths the best. This article breaks down the same along with answering some common questions related to them.

SAT vs ACT: A Quick Overview

Given below are the basic points of comparison between the SAT and ACT. Have a look at it to get a fair idea of the two:

Time Allotted to Each Question

The SAT Does Not Have a Science Section

If you think that Science is not your strong suit, then you must take the SAT as it does not include a Science section like the ACT. However, the SAT may test your scientific knowledge under any of its sections in the form of passages, data, or charts.

The ACT, on the other hand, has a Science section that you would be required to complete in 35 minutes. In addition, the weightage of the Science section would also be equal to that of its reading section.

The major point of contradiction between the two tests is that the SAT Math section is divided into two portions: Math Test–Calculator and Math Test–No Calculator, unlike the ACT Math section.

The SAT tests your problem-solving skills in all sorts of situations revolving around your college math, science, and social science courses, the jobs you do and your personal life. To the contrary, the math section in the ACT is aimed at testing the mathematical skills that you have gathered up to the beginning of the 12th standard.

The difficulty levels of both tests are somewhat similar. That being said, it would significantly depend on what your weaknesses and strengths are. For instance, if you are confident that you can score well in Science, then the ACT is certainly the right fit for you.

Again, as mentioned earlier, the SAT gives you more time for each question under each section.

In the SAT, the writing assignment will ask you to analyse a text and explain how the writer makes an argument to persuade an audience. The same shall be supported by evidence from the given passage and completed within 50 minutes.

The ACT writing test will be 40 minutes long consisting of one prompt. What you would be asked to do here is read the prompt and write an essay explaining your own stand on the given issue. It will be scored on the basis of the perspective you build and express in the essay.

Which is the Right Test for You?

What is important to understand is that no institution would favour the scores of ACT over that of SAT or vice versa. The purpose of both the tests is the same, which is to check the readiness for admission to colleges/universities.

The syllabus of the tests would have a different impression on each student. The best way to learn which exam would be ideal for you and your abilities is by taking practise tests of both the  SAT and ACT.

Should I take the Optional Essay?

The optional essay included in both the SAT and ACT does have an impact on your admissions. A great number of higher education institutions across the world choose to review individual essays to select students or make course placement decisions.

Nevertheless, many universities do not require the scores of optional essays and hence it has been made optional by administrators of both the tests.

Note:  SAT Subject Tests and Essay is Discarded officially by College Board

Should I Take Both SAT and ACT?

Taking both the tests comes with a number of advantages. Find out what the advantages are:

Learn More About the SAT and ACT:

In case you have further queries about the ACT or SAT, please write to us at abroad@collegedekho.com.