There are many different English proficiency tests you can take to study abroad, ranging from TOEFL and IELTS Academic to PTE Academic. Fortunately, there is a simpler alternative, Duolingo English Test, which is accepted by many UK universities. Read to find out more. 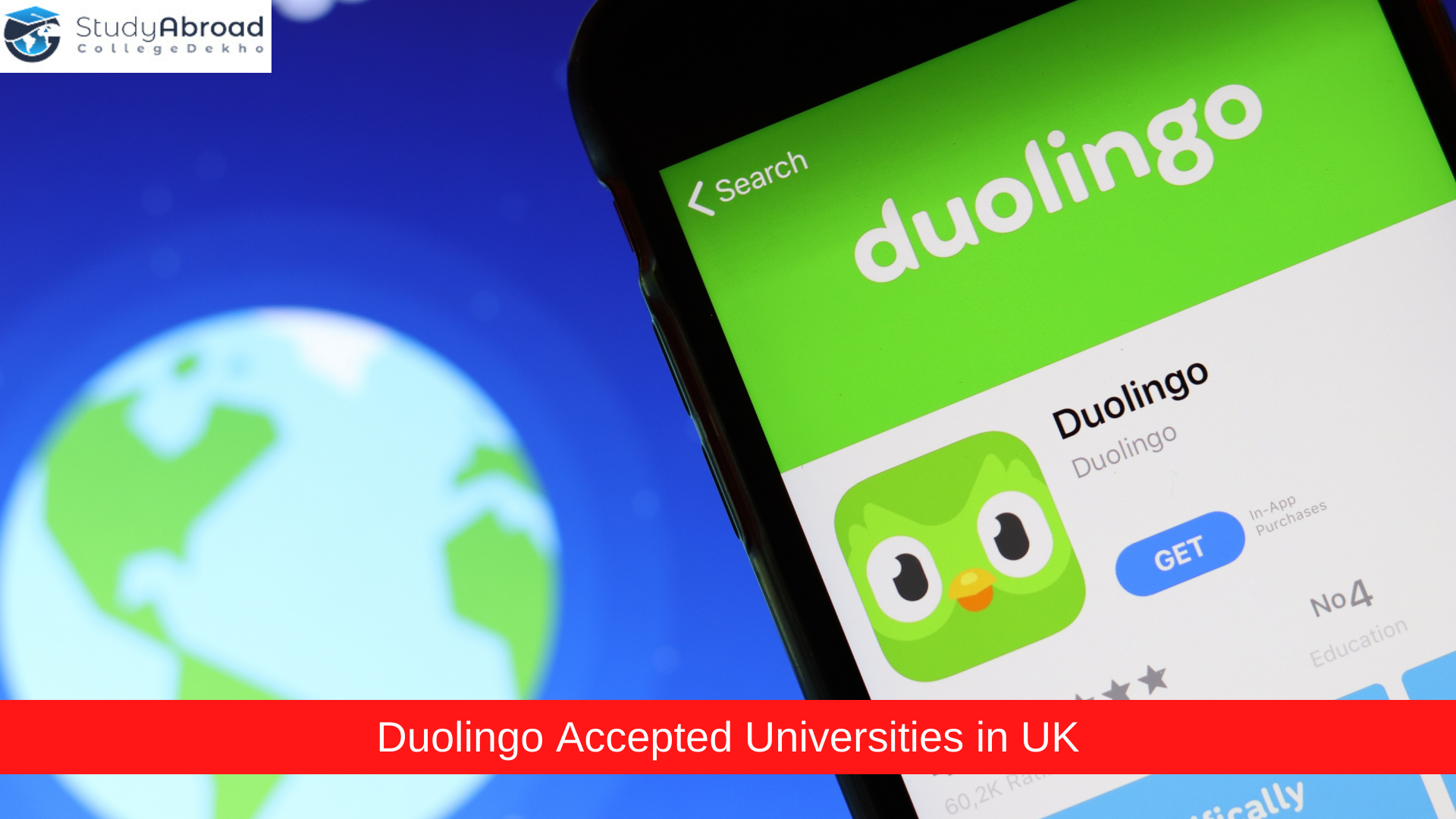 Duolingo Accepted Universities in UK: The Duolingo English Test is presently gaining popularity among study abroad aspirants due to its quick results and user-friendly web design. Not just in the US, Canada, and Australia, but we can also see Duolingo accepted universities in UK as well.

The number of Duolingo-accepting universities in the UK for 2022 is expected to grow due to its simple and straightforward procedure, which can be completed totally online! The Duolingo test, which was launched in 2012, has quickly become a popular alternative to prominent tests such as IELTS, TOEFL, PTE, and others.

The exam is accepted by over 3,000 universities worldwide, allowing you to take the test online at any time and from any location in less than an hour. Oh, and did we mention you will get your results in two days, which means you will be able to showcase your English skills to anyone right away? But which of the universities in the UK are accepting Duolingo as an English entrance test? Let us know about some of the top Duolingo accepted universities in UK.

What is the Duolingo English Test?

In a nutshell, the Duolingo English Test (DET) is a new and unique English competence program designed for today's international students, sometimes known as Generation Z or millennials, and institutions. It makes an English proficiency test, video interview, and writing sample accessible, efficient, and secure.

Now that you are familiar with the exam, here is a quick overview of the Duolingo exam pattern that will help you to understand this exam better if you wish to know the Duolingo accepted universities in UK:

Now that you are well aware of the Duolingo English Test and its exam pattern, let us quickly understand the benefits of taking this exam over any other English proficiency exams:

Is Duolingo Accepted in UK Universities

As an obligatory entry criterion for studying at UK universities, Indian students must show their proficiency in the language. Universities in the UK accept the results of many globally approved English proficiency exams, such as IELTS, TOEFL, and PTE, for this reason.

Many students have been unable to take these assessments at test centres due to the coronavirus pandemic. As a result, most universities in the UK now accept numerous online English tests completed from home like the Duolingo exam which means that Indian students can now easily meet their English proficiency entry criteria and continue to study for bachelor’s or master’s programmes at the Duolingo accepted universities in UK.

List of All the Duolingo Accepted Universities in UK

Below is a complete list of all the Duolingo accepted universities in UK where you can study:

Still have your doubts about taking the Duolingo English Test? Check out IELTS vs TOEFL vs PTE vs Duolingo to learn which test you should take and why.

Wishing to Achieve a Perfect Score in the Duolingo English Test?

Given below is a list of some of the leading and renowned Duolingo accepted universities in UK, together with their required DET score:

Note: The Duolingo score criteria for the UK are often between the range of 105 and 120. A score of 120 or higher is considered pretty good for master's degree programmes such as MBA, MS in Finance, Masters in Law, and so on. Some of the leading Duolingo-accepted universities in UK may additionally need overseas students to take an additional English test with that university.

Did you know that preparing for your exam under the expert guidance of dedicated exam faculty could do wonders for your profile improving your chances of getting enrolled into your dream university? Avail of our test-prep services to experience this for yourself.

The International English Language Testing System (IELTS) is the most widely used English language competence test for higher education and international migration. IELTS is trusted by over 11,000 organizations worldwide, so when you take the test, you can be confident that it will be recognized by educational institutions, employers, governments, and professional bodies all across the world.

The Test of English as a Foreign Language (TOEFL) is a standardized test used to assess non-native speakers' English language competence in order for them to enrol in English-speaking universities. More than 11,000 universities and other organizations in over 190 countries and territories recognize the test. TOEFL is a registered trademark of the Educational Testing Service (ETS), a private, non-profit organization that creates and administers tests.

The PTE Academic exam (Pearson Test of English) is a computer-based English language test that is recognised by educational institutions all over the world. The PTE-Academic English test is taken by students and hopefuls who want to study or immigrate to a major English-speaking country. Candidates who are eligible to take the PTE exam must take the test to demonstrate their English language proficiency.

The University of Cambridge's English for Speakers of Other Languages (ESOL) department has launched its Certificate in Advanced English, or CAE, in India, which is recognized by the UK Border Agency and over 2500 institutions. Cambridge ESOL provides a series of exams at various levels, with CAE being at C1, which is essential to undertake university-level academic programmes. The exam, also known as 'Cambridge English: Advanced,' was created to assess a candidate's communication skills required to complete complicated academic and professional activities in English.

In conclusion, several UK universities are now accepting the Duolingo exam scores. Each university's parameters or ratings may differ. In addition, the registration fee is also affordable in comparison to TOEFL or IELTS. The exam lasts one hour, and the results are available immediately after giving the exam.

Still have doubts regarding Duolingo accepted universities in UK? Connect with our experts at abroad@collegedekho.com and allow them to resolve all your queries!

Having Trouble Choosing the Right Duolingo Accepted University in UK?

Is the Duolingo exam accepted by the UK universities?

Yes, the Duolingo exam is being accepted by the universities in UK. The United Kingdom has become one of the most popular study locations globally and the UK universities have started accepting the Duolingo English Test after the Covid-19 pandemic. There are almost more than 50 Duolingo-accepting universities that are present in the UK.

Why one should choose the Duolingo Test to study in UK?

One should choose the Duolingo Test to study in UK or any other country that accepts this exam because Duolingo is a cheaper alternative to many of the conventional English proficiency tests like the TOEFL and IELTS Academic. Moreover, the results of the Duolingo English Test is available within 48 hours, which makes this exam less time-consuming for candidates.

What is the minimum Duolingo Score for the universities in the UK?

Universities have different requirements for international students who desire to study in the UK. Each institution has its unique set of requirements, which are mostly dependent on the student's course of study, academic records, and ability to meet them. A Duolingo score of 120 or higher is considered good. According to the Duolingo to IELTS converter, it is equivalent to a regular IELTS score of 7 or higher.

Does the University of Glasgow accept the Duolingo English Test?

Is the University of Edinburgh accepting the Duolingo English Test from international students?

Yes, the University of Edinburgh is accepting the Duolingo English Test scores from international students. If you can show that you are unable to participate in a test centre due to Covid 19, your Duolingo results will be accepted. The cutoff is 115 for the entire school. However, depending on the course, the cut-off score could be as high as 145.

Does the Imperial College of London accept international students based on Duolingo English Test scores?

Yes, the Imperial College of London is accepting international students based on Duolingo English Test scores. Imperial College London is the United Kingdom's sole university dedicated to science, engineering, medicine, and business. Their global reputation for excellence in teaching and research consistently positions them among the top 10 universities in the world. Admission requires a minimum of 110-120 Duolingo scores, but the numbers vary depending on the course.

What are the minimum Duolingo scores required by international students to study at UCL?

The minimum Duolingo scores required by international students to study at UCL or University College London are 135 or more. The DET scores will vary depending on your chosen course that you wish to study at UCL. Having said that, University College London (UCL) is one of the UK's top-ranked universities in the world, outranking 18 other institutions in the city and consistently outperforming in the top ten.

Is the number of Duolingo accepted universities in UK rising?

Yes, the number o Duolingo accepted universities in UK is currently set on a rise because of the exam's user-friendliness and quick result declaration when compared to other exams like IELTS, TOEFL and PTE.  Furthermore, the Duolingo English test accepted in UK universities is quite prominent and easy to pursue. A score of 105-120 can easily get you into the top institutions in the UK!

Does the UK accept the Duolingo test for a student visa?

If you want to apply for a student visa in the UK, you should know that your Duolingo exam scores will not be accepted. While many Duolingo-accepted universities in the UK are willing to accept these marks in order to admit students, the exam is not recognized by the UK government. In order to complete the application package for a visa to the UK, you must first take a recognized English proficiency exam, such as IELTS.

Which exam is better for studying in the UK, IELTS or Duolingo?

Because many UK colleges accept both exams, IELTS and Duolingo can be used to apply for admission. A good recommendation would be to consider the exam pattern, price, and difficulty to determine which exam is suitable for you. In terms of practicalities, the IELTS exam is preferable to Duolingo because it can be utilized for both college applications and the UK Visa process.