Grade Point Average (GPA) is the average of all the grades obtained by a student in his/ her academic studies. It is an international grading standard used for admissions in universities abroad and is measured in numerals, alphabets on a different scale in various countries. 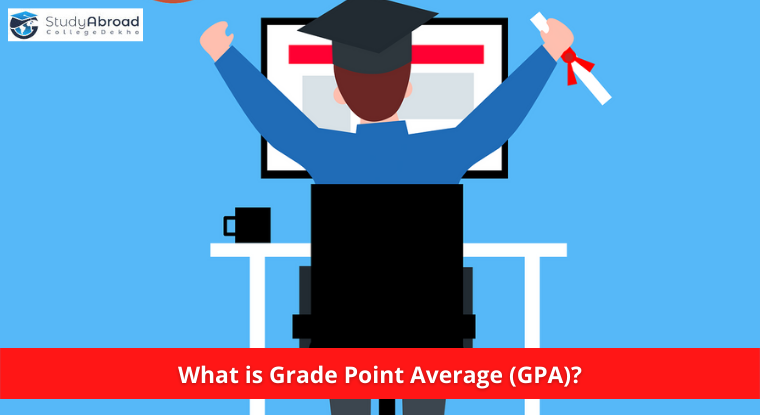 The grading system in education is a standardised process to define different levels of academic abilities of a student. The education system and grading system in each country across the world will be varied and is set as a standard for admissions within the country. However, to study in a foreign country, the need for a uniform grading system was realised. To sort out the problem, an internationally recognised calculation was introduced to calculate the grades, which is referred to as the Grade Point Average (GPA).

In all likeliness, if you are planning to study abroad in any of the popular study abroad destinations such as the US, the UK, Canada, Germany, Australia and more, the universities you choose would require you to meet certain academic requirements. These academic requirements would be stated in terms of GPA, i..e Grade Point Average, which is usually set on a scale of 0 to 4.0 across different universities. However, since India considers its academic requirements in percentage or grades, these universities would require you to conver your percentage or grade into GPA equivalent, which is usually done by recognised and authorised organisations.

If you wish to study abroad but don't know how to convert your scores into GPA, then we recommend talking to our experienced study abroad experts who have helped thousands of students apply to universities and courses available in different countries. Choose from our varied study abroad packages and get expert guidance on on everything you want to know about studying abroad.

Short for Grade Point Average, GPA is a standardised manner of measuring a student's academic achievements. Much like scoring marks in India, several countries outside, for instance the US, use different grading scales in schools and colleges. To find some sort of uniformity and conform scores obtained in schools to those acceptable in universities, GPA was created. Strictly assuming a grading scale of alphabets, i.e. A to F, each alphabet or grade is associated with grade points.

To define the Grade Point Average, GPA is the average result of all the grades obtained by a student in his/ her academic studies.

As the name suggests, GPA calculates the average, or overall, performance of a student and classifies them under the grades, i.e. A, B, C, D, E and F. Using this standard, universities are then able to quantify your academic rigour and figure out if your are academically qualified to complete a particular academic programme offered by a particular university abroad.

Want to Know about Studying Abroad?

Difference Between Grades, GPA and CGPA

Students who are interested in studying abroad must know the difference between the grading system and GPA, as GPA is required to complete the application process at an international institution.

A Grade is a numerical value in the form of marks or percentage obtained by a student for a particular course in a specific period of time. In Indian schools and colleges, students receive marks out of 100 for each subject and the overall marks in all subjects is converted into a percentage to get the final score of a term.

Grade Point Average (GPA) is the average of grades obtained by students in a given period of time and is represented in the form of numerical or letters. For example, it can range on a scale of 0 to 4.0 or A to F.

GPA is calculated for high school, undergraduate, and graduate students for admissions in foreign educational institutions to compare the past academic performances of applicants.

Cumulative Grade Point Average (CGPA) is similar to GPA. It is another grading system that is also used in India. However, it is only defined in numerical form on a scale of 0 to 10.

The following formula is used to calculate the CGPA on a scale of 0 to 10.

Also Read: When is the Right Time to Start Planning for Study Abroad?

The Education Grading System in India is constantly adapting and changing to the current needs of society. In India, marks are allotted in the form of percentage or CGPA (0- 10). Based on the percentage obtained, the following qualifications are defined:

CBSE follows a grading system for class X & XII students in which marks are represented in Grade Points on a scale of 0 to 10 and grades in alphabets which is as follows:

GPA is the grading method used in countries like the US, Canada and Australia, which are some of the top study abroad destinations for higher education. However, these countries use different grading scales to determine the GPA. For example, the GPA scale used in US universities ranges from 0.0 to 4.0, while, in Australia, the GPA Grade scale ranges from 0.0 to 7.0.

Need of GPA to Study Abroad

There are various grading systems acceptable in different countries and universities. To avoid confusion and ease the international student admission process, universities abroad convert the marks or percentages into a common and standardised format, known as the GPA.

For example, if you are planning to take admission to one of the universities in the United States, the percentage/ marks you secured in your home country, will be converted to a scale of 0 to 4.0.

GPA is needed to complete the application process at universities abroad but also simplify the entire admission process for both the universities and the aspiring overseas students. It is used to determine the level of performance of students in academics based on which the decision on admission is taken.

In addition, a good GPA is one of the first things used by universities to offer scholarships, financial aid, or other types of support. It will also help you join an organisation or club, participate in extracurricular activities and take up higher education.

The process of calculating the Grade Point Average is defined by the countries themselves.

Most universities and colleges will have a dedicated international student’s office or an admission office, wherein the university will be able to guide the students in converting their scores that are accepted by the university itself.

On the other hand, an unweighted GPA is the average of all grades earned on the 4.0 scale where difficulty of courses taken is not considered. Whether you get an A in a challenging course or an easy one, the GPA will stand at 4.0.

What is a Good GPA?

There is usually no good GPA as it varies depending on the university, level of education or course. You can check out the GPA ranges of former students at the university you are applying to in order to have an idea of what a "good" GPA specific to the university is.

That said, a GPA that will help you earn scholarships, financial aid or other support ranges between 2.5 and 4.0 on a 4.0 scale. Top universities abroad usually demand GPAs higher than 3.5 but if you have a GPA of 3.0-3.5, you can certainly get into a leading university.

You can reach out to us at abroad@collegedekho.com for any queries and information related to study abroad. Or, register with us now and talk to our experienced study abroad experts who have helped thousands of students shortlist and apply to the perfect university and course abroad. Through our test-prep services, you can also seek expert guidance from highly trained and experienced faculty who can help you ace popular study abroad admission tests.

Here's the Best University Abroad for You!

Register to Find Out!