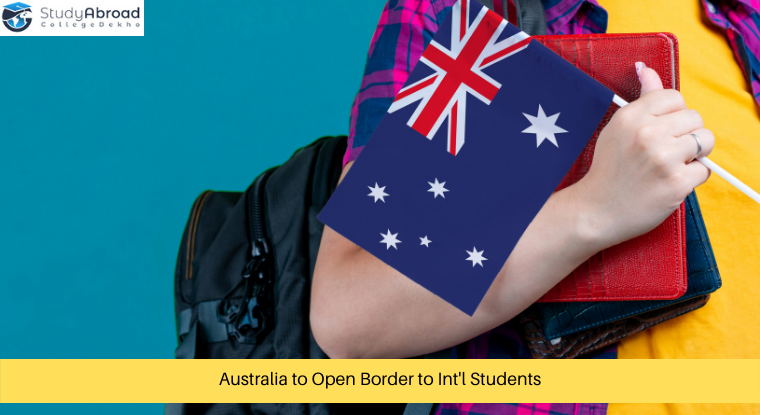 As per the latest media reports, the Australian Government is set to welcome international students before the previously scheduled date, i.e. 15th December 2021. Meanwhile, an arrangement has been announced between India and Australia where commercial passenger services will re-commence since the regular international flights have been suspended as a result of the pandemic.

With the emergence of the Omicron variant of COVID-19, the Australia border will now be reopened on 15th December for students and skilled labour, instead of 1st December, as had been planned previously.

As per the announcement, students will be allowed to enter Australia without needing to apply for a travel exemption from December 15th. In his statement, Greg Hunt, the Federal Health Minister, confirmed the federal government’s plan of staying on track with the plan.

He further highlighted that Victoria will also be taking steps to keep its reopening as scheduled, which have been maintained in consultation with the Prime Minister, the Chief Medical Officer and the National Cabinet over the previous weekend.

In addition to this, the Ministry for Civil Aviation of India announced an air bubble with Australia that will allow Australian citizens and valid visa holders eligible to travel and enter either Australia or New Zealand.

The ministry also added that the duty of ensuring that travellers from India, Nepal and Bhutan are not restricted from entering the destination country before they are issued a ticket or boarding pass will lie with the airlines.

The President of AAERI and managing director of Global Reach, Ravi Lochan Singh, took to social media announcing an air bubble for travellers from Nepal and Bhutan to travel through India. He added that regular and direct flights between Delhi and Sydney and Melbourne have been started with Air India and Qantas.

The media reports also reported that those travelling to the country are required to meet the travel requirements of the state or territory of arrival along with the states or territories they have planned to travel to.

For those travelling to New South Wales and Victoria, all travellers should quarantine at home or private accommodation for 72 hours on arrival. Meanwhile, travellers planning to enter Queensland or South Australia must compulsorily quarantine for 14 days

The Northern Territory requires all fully-vaccinated travellers to stay at a Covid-Safe zone located in Alice Springs, Greater Darwin or Katherine for a period of 14 days, from 20th December.

Reports also pointed out that Western Australia is set to welcome back students starting 5 Feb 2022. Meanwhile, Tasmania is yet to announce a date for international student return. On the other hand, the University of Canberra in the Australian Capital Territory are in the process of updating information regarding the same.

A University of Canberra spokesperson, welcoming the federal government’s move, stated that the first international students of the university are scheduled to return to Canberra via the pathway in early Jan 2022.

As of now, the International Student Arrival Plans for four states, i.e. South Australia, New South Wales, Victoria and Queensland have been endorsed by the federal government.

As per notification at the Home Affairs website, 15th December 2021 onwards, international students meeting the arrival requirements of the country, which include being fully vaccinated, can travel to the participating states and territories without quarantine or needing a travel exemption.

Reports have stated that those students who do not qualify for travel without exemption may still be able to travel to Australia under an International Student Arrival Plan. Additionally, it is reported that some international students who are able to meet particular criteria which include a few health and medicine and PhD research students may have limited travel exemptions as well.

Get Your Study Abroad Application Reviewed by Experts Now!

The Australian government has announced that it will lift the ban on certain categories of fully vaccinated travellers like foreign skilled workers, international students, working holidaymakers and provisional family visa holders in December 2021. This comes after the country’s adult COVID-19 vaccination rate crossed its 85% target.

Morrison said that all eligible visa-holders who are fully vaccinated against Covid-19 will be allowed to enter Australia from December 1. They would no longer have to apply for a travel exemption.

More international students, skilled migrants as well as refugees who test negative within 72 hours of departure and are fully vaccinated and hold a valid visa will be permitted to enter Australia, with priority given to skilled workers.

Australia has approved both Covaxin and Covishield vaccines.

Qantas, an Australian carrier will connect Delhi with Melbourne and Sydney from December

Earlier, Karen Andrews, Home Affairs Minister had said that although citizens were being prioritised, more travel restrictions including for certain non-citizens will be eased as vaccination rates have increased.

She had added that before the end of the year, the country expects to welcome fully-vaccinated skilled workers and international students.

In a statement, Morrison said that the country continues to take steps to safely reopen to the world, with further changes made to their international border arrangements. The same will come into effect on December 1.

Travellers to Australia should abide by the quarantine requirements in the state or territory of arrival.

These measures will further lead to the economic recovery of the Australian economy along with the education sector, said Australian PM's statement.

Source: The Times of India