With the US consulates working at limited capacities and a limited number of visa appointments available, international students remain uncertain about their visas being processed in time for them to travel and commence their higher education studies at one of the top US universities. 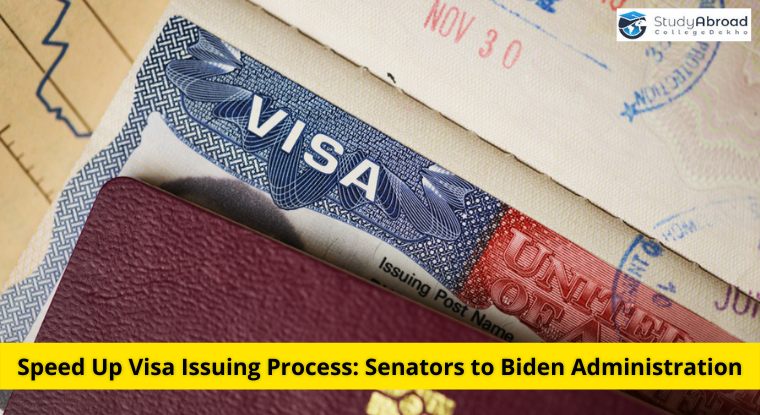 As the US begins work towards increasing the number of international students, a number of influential senators have requested the Biden administration to speed up the process of issuing visas to the international students. This move has been seen as beneficial for thousands of Indian students who have enrolled for the Fall semester across the US.

Currently, in India, students can only access emergency visas through the US Embassy in Delhi. Thus, numerous Indian students have become uncertain about the future of their academic journey.

In a letter to Secretary Tony Blinken, around 2 dozen expressed their concerns over the delays and slow pace of issuing student visas, especially when the country is recovering from the effects of the pandemic.

Also Read: International Students Confused Over Vaccination Requirements in the US

Through the letter, the senators suggested multiple methods to increase this speed, including offering consistent and predictable consular services, extend visa eligibility waivers, increase alternatives to in-person visa interviews through virtual interviews and waivers, authorising staff overtime, while also hiring more staff as well as introducing meaningful engagement with agencies and stakeholders outside.

With over 100,000 Indian students in the US, their contribution to the American economy has been significant. As per the Association of International Education data, in the 2018-19 academic year, over 1 million international students enrolled in US universities and colleges contributed $41 billion to the US economy.

Also Read: Air India to Increase Flight Frequency to the US Amid Massive Student Rush

However, the consistency of such a contribution for further years become endangered as confusion among international students remains. In the letter, the senators added while the country is at a critical point in the academic calendar and students plan their travel to the country, many US consulates are operating at lower capacities, with limited access to visa appointments.

The senators further added that the prospective students will find it difficult to be certain about their visas being processed in time. Thus, causing more confusion and delay in students travelling to the US and commencing their studies.