As his first order of business, President Biden has promised to revise and overhaul the immigration law with the aim of attracting more international talent to the US. Biden is promising many changes to the immigration law helping PhD and STEM graduates specifically. 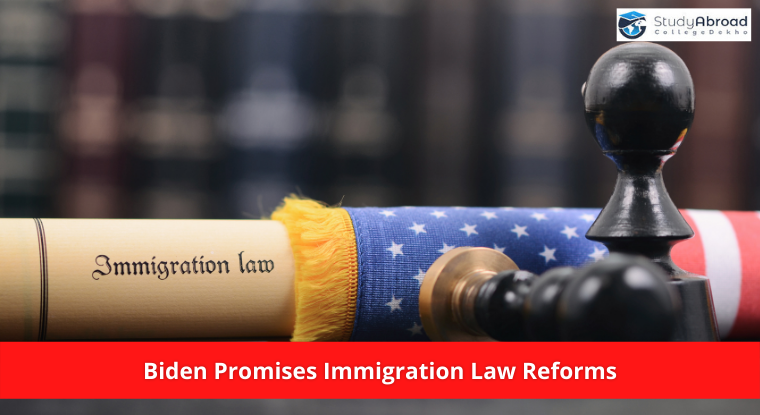 Beginning his journey as the next US President, Joe Biden, took to overhauling the US immigration law, which if approved by the Congress, would lead to an easier pathway for researchers, science students and engineers to travel to the country.

Biden released an executive order which was aimed at undoing the US travel ban on citizens from 7 exclusively Muslim countries, i.e. Yemen, Syria, Sudan, Somalia, Libya, Iraq and Iran. While the decision affected all kinds of travel between the countries and the US, the decision disrupted the flow of international students and tech professionals while also hindering various collaborative research opportunities.

However, a more significant decision that the Biden administration released was a proposal for broad immigration reform legislation. This, especially in the tech sector, would facilitate an easier passage to the country, study and then work in the US. The immigration reform is also aimed at allowing US Tech companies to recruit foreign experts who can help build the economy and help the US become competitive with other countries.

In a statement released by the Biden administration at the White House, while details were left out, stated that the bill is aimed at easing the process for advanced STEM graduates from US universities to stay back in the country.

Barbara R Snyder, the president of the Association of American University, released a statement, applauding the first decisions of Biden. She highlighted the “repeated, partisan and increasingly disturbing attacks on young undocumented immigrants..." mostly including scientists, scholars and students enrolled at leading research universities in the USA, who have and continue to contribute heavily to the economy, science and communities in the countr, over the last four years. She complimented the decision of the Biden administration, speaking on creating a pathway for the “best and brightest” to stay back and continue to contribute to the country.

However, like in every new administration, the new orders and legislation were seen with contempt and disagreement. A senior advisor at The Heritage Foundation, Mike Howell, stated that the Biden administration had put non-US citizens before US citizens, making the administration the first in the country.

Over the four years, various US universities and tech companies landed on the wrong side of the debate on immigration. The universities association had recommended certain suggestions regarding retaining foreign talent in the country after graduation, which could be done by modernising the immigration system.

Moreover, Biden also expressed acknowledgement of the need to increase the number of high-skilled visas, offering a more seamless and accessible naturalisation process while also removing the limits on employment-based visas by country. These changes would facilitate an easier visa process while also accelerating citizenship. Biden also displayed his support to increase the number of permanent, employment-based immigration visa as well as exempting recent PhD and STEM graduates from green card limitations.

As per statistics from the US State Department, a sharp decrease of 17% in the number of visas issued had been witnessed between 2016 and 2019. Additionally, a different State Department-funded research (2020 Open Doors Report) revealed less than 32,000 new international students had applied for education between 2015 to 2016. These sharp decline in the number of international students, not only affected the University finances but also reduced the talent available to the US tech industry.

Other countries saw this as an opportunity to attract international students to their country with better policies and resources. For instance, Germany introduced a new law allowing skilled workers outside of the EU, to speed up their immigration process. An immigration firm in Canada reported that 51% of the multinational employers considering the country as a destination for expansion. It stated that the country’s shorter processing times, an easy application process and favourable permanent residency processes affected their decision.

Karolina Filipiak, the senior director of government affairs at the Washington Alliance of Technology Workers, stated that while they support the notion of having more Americans take up the positions in the growing industry, however, due to shortage international students are crucial to the country.

How Will the Biden Administration Make it Easier for International Talent?

While the details of the processes and reforms have not been made public, which is expected soon, the tech and the academic sectors have submitted a long wish-list of changes that are needed.

Albert Teich, a professor at the George Washington University suggested that simplifying the entry would be considered as a big step to increasing the numbers. Removal of time limits on student visas and other restrictions, imposed by the Trump administration can be one of the steps as well, he added.

Teich also added that President Biden will be required to do more than damage control that was left behind by the Trump administration. The image of the US as being a destination for smart people needs to be rebuilt and the US needs to reaffirm its efforts to the world in being a more welcoming country for international cooperation.

Stakeholders are hoping for President Biden to revise the immigration regulations, source state, that had been enacted the Fall of 2020, which included the duration of status, the issues regarding wages, visa qualifications, while also eliminating the need to provide evidence that applicants will leave America upon graduation.