The ambitious immiration bill introduced by the Biden administration proposes to do away with the per-country quota for green cards issued based on employment and provide employment authorization for dependents of H-1B visa holders. 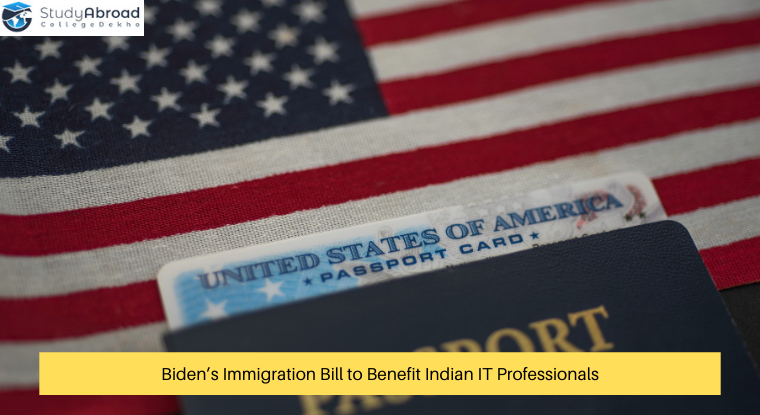 The Biden administration has introduced an immigration bill aimed at helping thousands of Indian IT professionals in the US. The bill among other things proposes to do away with the per-country quota for green cards issued based on employment.

The US Citizenship Act of 2021 plans on starting a pathway to citizenship for 11 million undocumentted workers through elimination of per-country cap for employment-based green cards and employment authorization for dependents of H-1B visa holders.

The bill, after being passed by House of Representatives and the Senate and signed by President Joe Biden, would grant citizenship to millions of undocumented workers along with those working in the country legally.

Also Read: Biden Immigration Bill to Make Staying in the US Easier for STEM Graduates

If signed into law, it will benefit thousands of IT professionals from India and their families. In addition, those waiting for a Green Card for over 10 years will immediately get a legal permanent residency as they would be exempted from the per-country visa cap.

Congresswoman Linda Sanchez and Senator Bob Menendez, the two authors of the bill, said that the act establishes a vision for immigration reform that is inclusive and expansive.

It aims at growing the US economy by making required changes to the employment-based immigration system such as making it easier for STEM graduates from US universities to stay in the US, eliminating per-country caps, improving access to green cards for those in lower-wage industries.

It would also let dependants of H-1B visa holders get work authorization, and prevent their children from “ageing out” of the immigration system.

Also Read: Indian Students Applying to US B-schools to Face More Competition in 2021 and 2022: GMAC President

Sanchez said that she herself is the daughter of immigrant parents from Mexico and she has dedicated her career to give immigrants like her parents a better life and contribute to making the US fairer.

Immigrants are great contributors to the US, who own businesses, teach our children, pay taxes and are our neighbours, coworkers and friends, added Menendez.

He continued to say that this is a historic opportunity for the government to bring about bold immigration reform and address root causes of migration.