China May Not Open Borders for International Students

By Cyril Zachariah Updated On - Sep 07, 2021 03:28 PM
As per sources, no immediate plans have been placed by China to welcome over 4 lakh international students, which includes 23,000 Indians from returning to study their respective courses at the Chinese Universities. 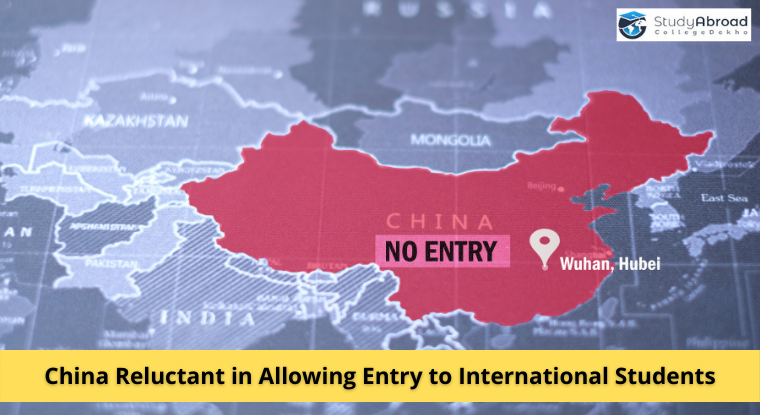 While countries across the globe start to open up their borders even with the pandemic evolving and spreading into different variants, China has announced its reluctance to welcome overseas nationals from entering the country.

As per sources, China stated that it “cannot relax pandemic controls” for foreign travel. In other words, no immediate plans have been placed to welcome over 4 lakh international students, which includes 23,000 Indians from returning to study their respective courses at the Chinese Universities.

The Vice-Minister of the National Health Commission, Li Bin, stated that the officials will work on preventing imported infections from permeating locally, while also strengthening the inspection of imported goods.

Also Read: International Medical Students Enrolled in Chinese Universities Reach Out to the UN for Help

Li Bin further added that cities such as Guangzhou, Shenzhen and Ruili have witnessed local clusters of the Delta variant as a result of the imported cases. The local media quoted him saying that the “waves have reminded us that we cannot relax our pandemic control measures.

The NHC Minister’s comments were made to help the Chinese Foreign Ministry ward off questions with respect to permitting the return of the 4 lakh international students waiting to enter the country, since last year.

The letter further added that the “forever friends of China” have been left in a lurch that could only be solved by China. “Our education is on the line, our future is at stake.”, the letter highlighted.

To date, China has been maintaining its stance on Chinese universities offering online classes for the students, while also highlighting the spread of the virus across countries abroad.

However, these online classes have had little impact on the 23,000 medical students from India, who have had to move back their studies with laboratories facilities, sources state. Adding fuel to the fire, the frustration of the international students grew as many Chinese students enrolled in US Universities flocked to the US once Washington re-opened the visa process, thus facilitating their return.

Answering questions from journalists from around the world, Foreign Ministry spokesperson Wang Wenbin, stated that China has placed great importance on the issue of allowing re-entry of the international students returning to China. He added that the country will make the necessary considerations for the same while ensuring safety during the pandemic.

Meanwhile, Indian diplomats in Beijing have been communicating with the Chinese government, both with the education and foreign ministries, regarding the pleas of Indian students stuck in their home country, promising adherence to all specified protocols.

The local media highlighted that Pakistani students comprise a third of the entire international student population and are among those who are also suffering from the effects of studying remotely.

Currently, there are more than 4.4 lakh international students studying in China, which includes the 23,000 Indian students, especially in courses such as Medicine and are paying heavy fees.

While stakeholders expect to see China relax its border entry restrictions for international students by September 2021 or April 2022, the start of the new academic year.

Furthermore, officials also expect to vaccinate at least 70% of its population to achieve herd immunity by early next year. However, until this goal is met, China is expected to continue to take such hard measures to keep the spread of the virus at bay.

Feb 11th, 2021: International Students May Not Be Able to Enter China Anytime Soon

Trying to enter China would now be impossible for anyone holding valid visas and residence permits from Ukraine, UK, Russia, Philippines, Italy, India, France, Ethiopia, Belgium and Bangladesh. Since the uncontrollable outbreak in March, students have not been able to enter the country, which has led to increasing frustration due to lack of communication or updates.

Wang Wenbin, a Government spokesperson stated that the measures that have been implemented are reasonable and as per the standards of international practices, in a press conference that had been held recently.

Sources have claimed that the Chinese Government has been able to curb the spread of COVID-19 in most regions of the country, with a few major cities even reporting pub trivia nights on a weekly basis. Sources add that this has been possible due to the strict border control.

On the other side, the students who have enrolled in practice-based programmes such as Medicine have been critical of the approach taken by China. They stated that online classes would deem useless for medical students as it is not an accepted form of study to further practice in the field.

Many students have stated that the entire process has been mentally draining. Sources have also stated that a lot of the frustrations also rise from treatment offered to Chinese International students compared to those enrolled in Chinese Universities, which is different.

A few students stated that some Universities in other countries have organised Charter Flights for Chinese students, meanwhile, Chinese institutions are yet to even reply to the students.

Sources state that a few Universities are more in-line working with international students, and thus, have better networks and opportunities in place. These universities have partnerships which are forward-thinking and progressive. Further, these institutions are taking up initiatives to support and help their students.

Also Read: International Students in the US Hope for Stable Status Under Biden Administration

Few people have commented that opening of borders would not make any difference sue to the strict entry requirements that are “almost impossible” to adhere to. Currently, those travelling to the country are required to carry 2 COVID-19 Tests taken less than 48 hours before the flight. Further, if the person chooses a connecting flight, they are also required to carry a COVID-19 test from the country of the stopover as well. Moreover, travellers will then also be required to quarantine for 14 days, which will entirely be self-funded.

Thus, travelling to China is nearly impossible students as well as anyone wishing to travel to the country. Therefore, planning higher education in the country anytime soon maybe pointless till restrictions are relaxed and further assistance are provided by the institutions itself.