Bharat Biotech’s Covaxin Likely to Get WHO Nod Soon: Experts

On July 9th this year, Bharat Biotech submitted the necessary documents for Covaxin to receive a WHO EUL. This will help aspiring Indian students planning to travel, enter and study in one of the study abroad destinations that have mandated a WHO-recognised vaccine for its international travellers. 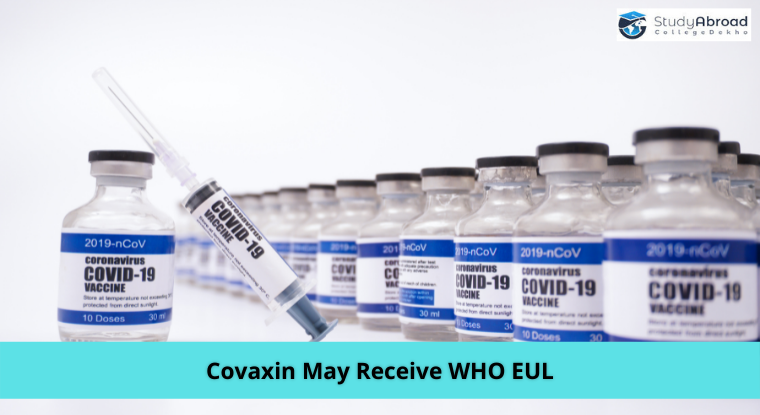 Good news for the Indian students planning their study abroad trip, as experts claim that Covaxin may be accepted by WHO for Emergency Use List or EUL. Bharat Biotech, the developer of Covaxin, had submitted the necessary documents for the EUL to WHO on 9th July, 2021.

An expert from the official vaccination planning body of India stated that Bharat Biotech Covaxin may likely be included in the WHO’s EUL by this week. On 23rd June, Bharat Biotech had attended a pre-submission meeting with the WHO representatives as part of the consideration.

With an inclusion into the EUL, Covaxin will receive wider recognition and acceptance across countries that have mandated WHO-recognised and accepted vaccinations among its international travellers. Previously, Indian students who needed to travel abroad to commence their studies needed to be vaccinated by one of the WHO-recognised vaccines. Covaxin had been recognised and accepted by limited countries, thus, further restricting the movement of students.

Dr NK Arora, Chairman of the COVID-19 Working Group of National technical Advisory Group on Immunisation stated that the company had submitted all relevant documents, including the vaccine safety data to WHO.

Krishna Ella, the Chairman and Managing Director of Bharat Biotech made a statement revealing that Bharat Biotech had submitted the necessary documents, with the review process under progress. The team at Bharat Biotech expects to receive EUL from WHO as early as possible.

In India, the Indian regulator has approved 6 COVID vaccines, however, COVISHIELD, manufactured by the Serum Institute of India and Covaxin are the mainstay of India’s inoculation campaign. The Indian version of the Oxford-Astra Zeneca vaccine AZD1222 has received a WHO EUL and accounts for up to 90% of the 750 million doses that have been administered to Indians to date.

Phase 3 of clinical trials of the vaccine, developed by the Hyderabad-based vaccine major and the Indian Council of Medical Research, had been assessed by a subject expert team of the Central Drugs Standard Control Organisation (CDSCO) and found that the inactive who virion vaccine had an efficacy of 77.8% in preventing symptomatic COVID-19.

As per Hindustan Times, people familiar with the matter claim that “it is a matter of time before approval is granted [to the vaccine].” The WHO had begun a rolling review of Covaxin on July 6th this year and the review is still under process.

The WHO Emergency Use List is a risk-based procedure that assesses and lists “unlicensed vaccines, therapeutics and in vitro diagnostics with an ultimate goal of expediting the availability of these products to those affected by a public health emergency.”

Additionally, several UN member states and procurement agencies interested in using a product will be able to gauge the acceptability of certain products, with the help of an essential set of available safety, quality and efficacy and performance data, stated HT.