Further facilitating more options for study abroad aspirants, ETS has announced a new format for TOEFL iBT. The new format facilitates two sessions for the test, where test-takers will be able to attempt the test in two different places, i.e. one session in a test centre and the other at their homes. 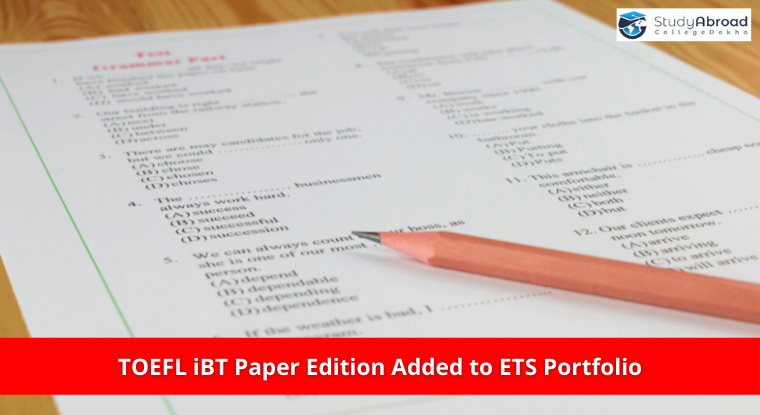 In a bid to make their products and services more customer-oriented, ETS, the test provider for TOEFL gas announced an addition to the TOEFL iBT portfolio, offering different options to the test-takers, who have aspired to pursue their bachelor or masters in countries across the globe.

As per the announcement, a new TOEFL iBT Paper Edition will be introduced, where four skills of the candidate will be evaluated over two sessions, i.e. one session in the allocated centre and the other at the candidate’s home. ETS further announced that the new offers will only be offered in India, Mexico, Colombia and US and will be offered at the same price point as the other formats in each location.

Srikant Gopal, the Executive Director of the TOEFL programme commented that with a customer-centric approach and an objective of providing high-quality testing options, thus, serving the needs of both the institutions and students.

Also Read: Wish to Practice Medicine in India? NExT Likely to Replace FMGE in 2022

Previously, in a bid to find solutions to the restrictive way of living that the whole world was forced to adopt, ETS offered the TOEFL Home Edition, which became a permanent product offered to TOEFL test takers, along with bringing early performance indicators for its TOEFL iBT. Moreover, in 2021, ETS also announced an “accessible, affordable” Essentials test.

A statement released by the TOEFL Executive Director commented that ETS is eager to support students take advantage of the TOEFL options in their preparation to study abroad.

As per ETS, TOEFL iBT test-takers will first be asked to attempt the reading, listening and writing sections at the allocated test centres, subsequently attempting the speaking sections at their homes, within the next three days.

ETS further added that the new format of the TOEFL iBT test can be accepted in the same manner as the other tests, trusted by over 11,000 universities and institutions across 160 countries. However, ETS has advised students to confirm the same with their prospective schools, colleges and universities.