Students in Maharashtra planning on flying abroad this Fall are facing visa processing delays and second shot difficulties even though a special vaccination drive for them was launched last month. Students from small towns have also been facing difficulties in convincing authorities about the reduced gap between two vaccine shots. 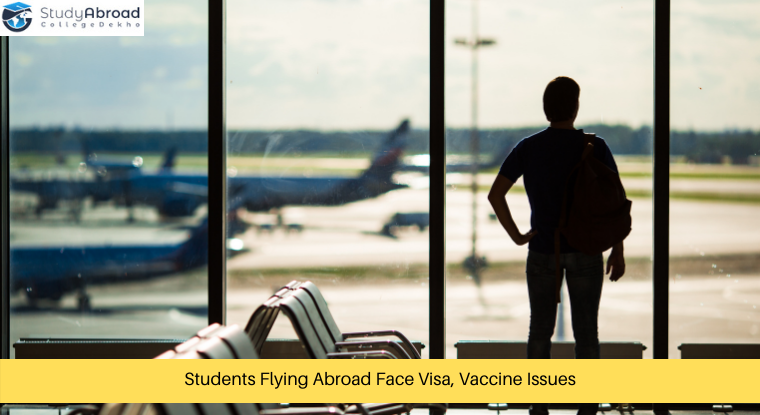 Over a month after a special vaccination drive for students in Maharashtra going abroad was announced, students are still waiting for their visas and second jab to arrive in the US on time for the fall semester starting in August.

Students have been voicing their concerns on social media platforms including Twitter. Mohit Patel, a student enrolled at Toronto's Northeastern University said that Indian flights were still not allowed to enter Canada and some of them had booked flights to halt in another country before flying to Canadian cities.

Patel further mentioned that he was spending around Rs. 1 lakh to travel to Mexico and then to Toronto in order to avoid travel restrictions.

The Indian government opened COVID-19 vaccination program for all adults on May 1, 2021 but urged states to bear their costs of vaccinating those falling in the age group of 18 to 44 years by buying vaccines directly from the manufacturers.

Many manufacturers including the Serum Institute India and Bharat BioTech, however, were unable to sell their vaccines directly to the states because of lack of approvals, indemnity and insufficient production.

On June 21, 2021, Centre started procuring vaccines for those in this age category too but till then, states like Maharashtra started prioritising vaccination of students planning on studying abroad this fall.

In addition, although Centre reduced the gap between two vaccine shots from 84 to 28 days, students from small towns were facing difficulties in convincing authorities about the reduced gap.

Wish to Apply to Leading Foreign Universities for the Next Intake?

Many students enrolled at Canadian universities have also been uncertain about their visas. A student, hoping to join the University of Ottawa this fall, said he had received his visa papers on May 4 but he is still waiting to receive the passport submission and payment link.

The government of Canada, on their official website, has said that students who completed the submission of their visa application before May 15 should receive a confirmed decision by August 6, 2021, even though flights from India are currently suspended.

Also Read: China May Not Open Borders for International Students

On July 8, VFS Global took to Twitter to announce that Canada VAC had started their Passport Submission Service in a phased manner. Applicants who have completed their two-way courier process before the lockdown will be contacted by VFS Global via email.

Many students are also wary of the new Delta variant of COVID-19 in the US and other countries.