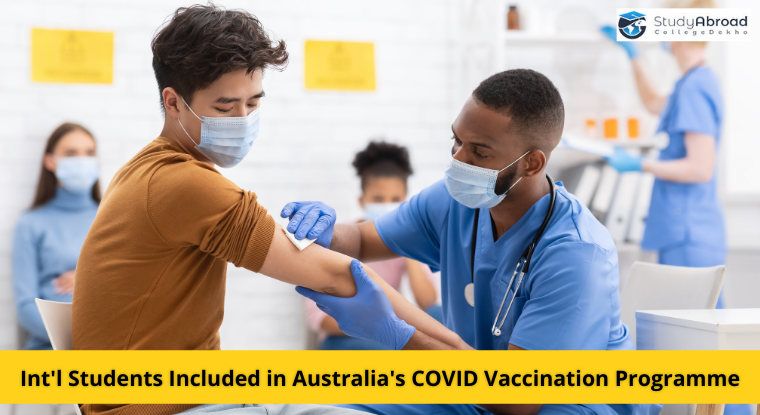 A good news for international students in Australia was announced earlier this month as the government has announced that the COVID-19 vaccine will be available to the students as and when it rolls out this month.

Greg Hunt, the Federal Health minister, stated that the vaccination strategy adopted by the country is focused on providing the maximum number of people with access to the vaccine.

In his statements, in order to protect all those who are on Australian soil, the government will be offering the COVID-19 vaccine free of cost to all visa holders in the country. These visa holders will include asylum seekers, refugees, temporary protection visa holders and people on bridging visas. The free-of-charge vaccine will also be available to people under detention facilities and those with cancelled visas.

The Australian government, however, has highlighted certain visa holder categories will not be eligible for the free vaccination, which include people on Electronic Travel Authority, eVisitor, Tourist and Transit visas. Nonetheless, these visa holders can access the vaccination under a “user-pays arrangement”.

As per sources, 150 million doses of the different vaccines have been secured by the Australian Government, with Pfizer/BioNtech vaccine rolling out in the coming days. The vaccines are still subject to approval from the country’s Therapeutic Goods Administration.

Other vaccines such as Oxford/AstraZeneca, Novavax, COVAX Facility vaccines have also been considered by the Australian government upon successful clinical trials and subsequent approval by the TGA.

The current strategy of distributing the vaccine outlines 5 phases of distribution, which has been aimed at protecting the most vulnerable in the community, irrespective of the citizenship or visa status.

Included in the priority list are border workers, quarantine and front-line healthcare workers such as those employed in the intensive care unit and emergency department. People in residential and aged care will also be prioritised along with those working there.

The strategy also focuses on administering the vaccines through specialised hubs across the country, initially. Vaccination teams will be headed to various facilities such as aged care homes. With vaccines rolling out on a daily basis, General Practitioners will also be able to administer the vaccine during local practices.

In his statements, Hunt emphasised the importance of working with those from culturally and linguistically backgrounds and ensuring they participate in the programme. He stated that $1.3 billion have been allocated to support multicultural peak bodies to facilitate culturally and linguistically diverse communities to support the rollout of vaccines. Hunt also mentioned that the official website of the Department of Health will feature 63 languages, while advertising in 32 languages and offering a vaccine explainer in 29 languages.

The Australian government has not made the vaccine as a mandatory requirement, however, those who have not received the vaccine may face certain travel restrictions that are in-line with the COVID-19 Vaccination Policy of Australia, while other countries may implement border entry/re-entry requirements which could be based on proof of vaccination.

Stakeholders expect that the vaccination programme will help in re-opening of the borders for international students much earlier, however, as per the COVID-19 Vaccine and Treatment Strategy of Australia, a dedicated timeframe is yet to be established by the government for the same.

Hunt further stated that some COVIDSafe regulations will continue to remain in place, while the vaccinations are being rolled out and afterwards as well. This will be done so in consideration of the vaccines being less than 100% effective in the prevention and transmission of the virus.

Estimating that the vaccination programme will finish by the middle of October 2021, the Australian government is expected to welcome international students in a safe manner. Factors such as the vaccination status and other parameters will be considered upon arrival of the foreign nationals, in a bid to keep, both the Australian community and the international students safe.