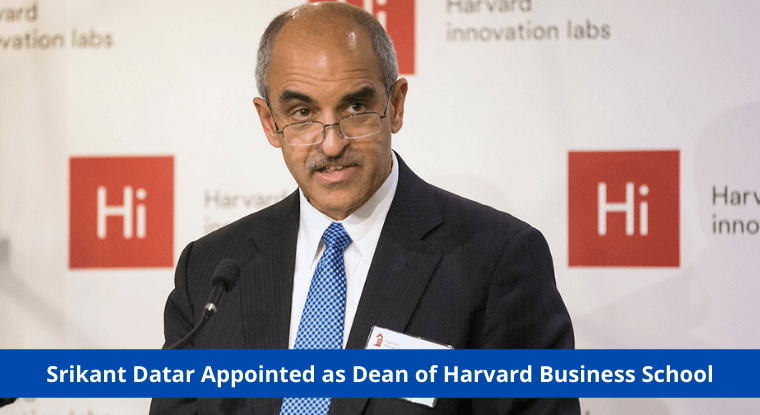 The prestigious global business school in Boston USA, Harvard Business School has appointed a new Dean, who is an Indian-origin economist and academician, Srikant Datar. Srikant Datar is an alumnus of the Indian Institute of Management Ahmedabad. Datar will assume the role of Dean of Harvard Business School, Harvard University, from 1st January 2021.

Datar is now the second consecutive Indian-origin Dean of Harvard Business School who has assumed the role. Prior to him, Nitin Nohria had assumed the position, to which he announced his conclusion of Deanship by the end of June 2020.

The President of Harvard Business School, Larry Bacow describes Srikant Datar as a distinguished scholar, an innovative educator as well as a deeply experienced academic leader. He further explained Datar to be a leading thinker of the future of business education. He further stated that Datar played an important role to come up with a creative response to the challenges faced by Harvard during the pandemic.

Srikant Datar, after completing his graduate studies from the University of Bombay in 1973, took on the job of a chartered accountant. Subsequently, he was able to gain a PG Diploma in Business Management from IIM Ahmedabad. Datar was also able to earn another Master’s Degree in Statistics and a PhD in Business from Stanford University. He further became an assistant professor and then an associate professor at the Carnegie Mellon Graduate School of Industrial Administration, Carnegie Mellon University from 1984 to 1989 and subsequently was conferred the George Leland Bach Teaching Award.

Also Read: New Student Retention Initiative for International Students Unable to Travel to the US

Datar started his career at Harvard Business School as a faculty member in 1996. Datar was appointed as the senior associate dean responsible for the recruitment of faculty members, faculty development, executive education, research and currently has been recruited for University affairs.