HECI Bill With Foreign Universities in India Clause to Get Cabinet Nod Soon?

A Bill to do away with UGC and AICTE will be tabled in the Parliament in October. It will also include a clause to allow foreign universities to set up campuses in India. Read on to learn more. 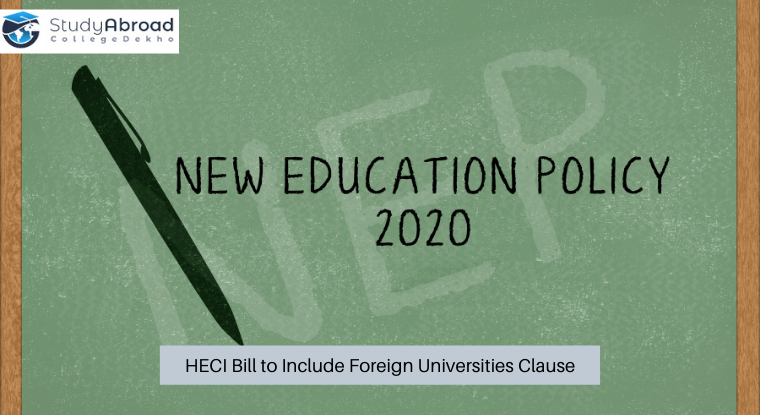 As part of the new National Education Policy (NEP) 2020, the ministry of education is preparing to table a Bill before Cabinet to set up the Higher Education Commission of India (HECI), which will also include a clause for the operation of foreign universities in India.

The Union Cabinet had approved the NEP on July 29, 2020, paving the way for an all-new structure of schooling and higher education in the country. The new policy has also opened doors for the top 100 foreign universities to establish campuses in India. This model would grant special dispensation to foreign universities in accordance with governance, regulations and content norms, as prescribed for other Indian autonomous institutions and also encourage Indian universities to set up campuses in various countries.

The significance of HECI also lies in the formulation of rules and regulations to ensure the autonomy of institutes, inclusion and access for all, public disclosure of performance in academics, specify norms of degree-granting, learning outcome, evaluation of institutions and so on.

The setup of HECI has long been in the pipeline and it is finally going to act as a single regulator for the entire higher education, thereby, replacing the University Grants Commission (UGC) and All India Council for Technical Education (AICTE). HECI will also have several functions including funding, accreditation and academic standard setting will be executed by independent verticals such as National Accreditation Council (NAC), the General Education Council (GEC), the National Higher Education Resource Centre (NHERC) and the Higher Education Grants Council (HEGC).