The third edition of the IDP Connect International Student Crossroads Research has revealed that international students are more interested in countries that are accepting students on-campus. In-person teaching is an important factor for students while choosing a study abroad destination. 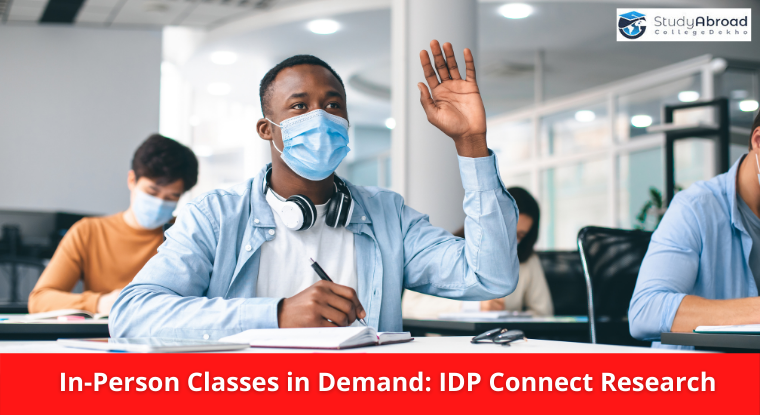 With countries across the globe fighting to retain the top study abroad destination tag during the COVID hit period, new research conducted by IDP Connect and Universities UK International stated that the availability of face-to-face teaching has strongly affected the choices made by prospective international students.

The research was conducted examining the behaviour and attitudes of over 5,000 international students with applications or offers to higher education institutions in countries such as Australia, Canada, New Zealand, the US and the UK, which is a part of the third instalment of IDP Connect International Student Crossroads Research.

As per the studies, it has been revealed that students were more attracted to and had a better perception of countries that had their borders open during the pandemic. However, it was also understood that the students are also willing to change their destinations of study based on the availability of face-to-face learning.

Therefore, while the UK’s decision to allow students in the country, the research has also highlighted the risk of students switching their study abroad destination in order to receive access to more in-person teaching as soon as possible.

The research highlighted that out of all the participants that held offer letters from the UK, 33% of them would likely change their destination of study if it meant that they would receive in-person training earlier.

The CEO of IDP Connect, Simon Emmett, stated that the research also highlighted that a large number of students are willing to take up online classes provided that they transitioned to in-person classes after 3 months.

He further added that the students have been seeking solutions and support from the universities and governments to facilitate a quicker return to campus.

Emmett stated that while certain countries like New Zealand and Australia are overall considered a good study abroad destinations, the perceptions of students of the country is suffering during this period.

Also Read: Educators Must Ensure Int’l Students Have the Best Experience While in Ireland, Says ICOS

With countries like the UK, strongly communicating with the students and allowing them entry to the universities has made them an attractive study abroad destination when compared to countries such as Australia.

However, while the policies implemented by the Uk have improved the overall perceptions among the students, the UK still stands behind countries such as the US and Canada. While the students have opted for higher education in the UK, they have also highlighted that may change destinations if the provision for in-person training is made available earlier than in the UK.

Vivienne Stern, the Director of Universities UK International stated that the universities have been working hard towards bringing the expected student experience to aspiring students and be flexible in their models of learning and commencement dates.

She added that both the Higher Education Sector of the UK and the UK Government continues its work towards a better and stronger approach to providing high-quality education, in both online and offline modes.

Experts have commented that the Research has shed light on the importance of bringing back international students in the higher education institutions, whether it be in Australia or the UK. Failing to provide the necessary support and guidance to students will lead to negative impacts on the country as a study abroad destination.