International Education Sector Expected to Get a Boost Under Biden Administration: US Educators

With Biden’s victory, educators in the US have high hopes from the new administration to bring about more opportunities for immigrants and international students. Many stakeholders have called for damage control against the harm caused by Trump’s administration. 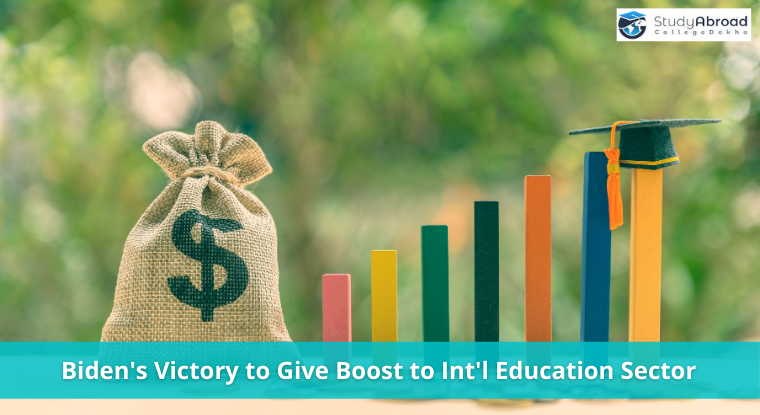 With the USA preparing to welcome Joe Biden as the 46th President, the education sector expects better support for international collaboration and liberal immigration policies. This, in turn, will boost the number of foreign students who will consider the US as a destination for higher education and the overall international education sector as well.

In a statement, Biden praised Kamala Harris, the Vice-President-elect, who will become the country’s “first woman, first African American woman, the first woman of South Asian descent and the first daughter of immigrants to ever be elected to the national office…” Moreover, the Biden promised that dreams of many have been deferred for long and they must work towards making the dream a reality, regardless of their, faith, ethnicity, identity, disability or their race.

During the Victory speech, Biden stated that the day had been a great day for the US Educators, stating that one of America’s educators will be present in the White House.

The executive director of President’s Alliance on Higher Education and Immigration, Miriam Feldblum, requested a “bold and aggressive agenda” for reducing the damage caused by the previous administration and revoke any rule changes pending in the government.

Feldblum stated that with the damage caused to the US campuses, communities and nation with the implementation of different anti-immigration policies of the current administration, a need to expand protection and opportunities to immigrants and international students has been requested by the President’s Alliance to the new administration.

Additional, Feldblum called for a “pause” and withdrawal on all proposed rules and regulations that increase the restrictions on international students and scholars, such as the duration of status and other H-1B rules.

Also Read: Will International Students Get a Warmer Welcome in the US From the New Govt?

She also added that the new administration should work on immigration reform that facilitates a roadmap to citizenship for the “nation’s dreamers, TPS holders and undocumented individuals”. Moreover, the administration should work on an immigration reform that recognises the contributions made by the international scholars, alumni and student alike.

Many experts and stakeholders in the education sector commented that the Democrats and the Biden administration will openly support and push initiatives that facilitate more international students in the country and recognise their contribution to the economy overall.

Ted Mitchell, the President of the American Council of Education, stated that the higher education community will partner with the new administration and work on the important challenges such as “expanding equitable access to educational opportunity and supporting cutting-edge research and innovation.”

Highlighting the need for finalising and approving a comprehensive COVID-19 relief package that includes a minimum of $120 billion in financial support for students, colleges and universities who are in “existential crisis”, Ted Mitchell added that the Biden administration should make this issue a top priority in January.

Reports and statements from students also hinted that the election results have made them “feel at ease” with regards to the anti-immigration policies, which felt unfriendly and restrictive.

Simon Emmett, the managing director at IDP Connect stated that Trump’s travel policy ban, as seen in their data, a decline in interest of studying in the US. The travel ban particularly brought a decline in this interest from the Middle East.

Additionally, IDP’s annual Student Buyer Behaviour research revealed that the US perceptions of the US lag behind that of the US, Canada and the UK. However, in terms of the perceptions of the quality of education offered, the US has taken the top position.

IDP’s search platform further stated that a “gentle upward trend” has been witnessed for the US over the past two weeks, as searches for the country rose from 10.35% to 16.05%, Emmett added. Countries such as the UAE, Saudi Arabia and Pakistan saw rises in searches as announcements of Biden’s win came forward.