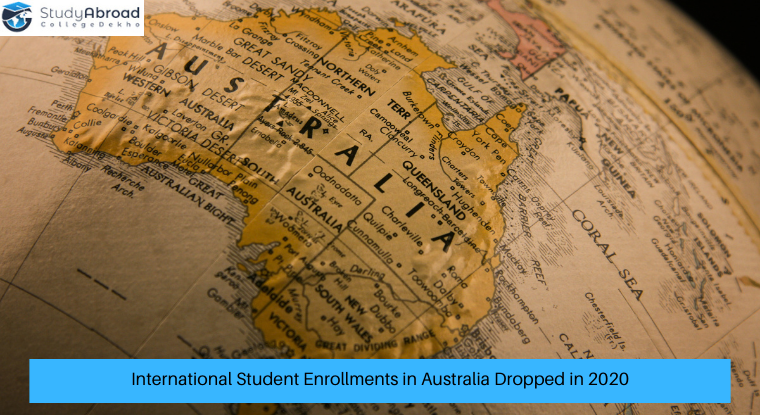 As per the latest government data, a total of 210,000 fewer international student enrolments have taken place this year, than what was expected. The government data revealed a loss of AU$1.8 billion in income, with more than 17,000 jobs lost in the higher education sector. Providing context to the figures, in 2019, there were a total of 442,000 international student enrolment in Australia, as per the latest data available.

Alan Tudge, the Federal Education Minister of Australia, believes that the rollout of the COVID-19 vaccine will give a much-needed boost to the international student intake, early next year. In his statements, he hoped to see a large number of enrolments early next year, thanking students for their patience, who are currently enrolled in Australian Universities and stuck overseas. He raised the possibility of universities individually bringing back the international students this year if the Chief Health Officers of the country approve and safe quarantine measures are available.

The Australian international education market, an AU$ 10 billion sector, collapsed following the closure of the borders last year. While Tudge claimed that the enrolment numbers were down by 7%, universities estimated that over 140,000 students were stuck abroad. However, official data has revealed that 210,000 fewer students have enrolled in Australian Universities this year as would have been expected otherwise.

As per data revealed by Universities Australia, a representative body in the country, a loss of income from international students amounting to AU$1.8 billion had been reported last year. Thus, resulting in a loss of over 17,000 jobs being lost in the higher education sector.

Tudge added that the institutions will have to get their plans approved by the Chief Health Officer of their respective states before the international students can set foot on-shore.

Tudge also commented that more than half the international students enrolled in Australian Universities were pursuing management or commerce programmes. He added that this was an area where the country was not facing any shortages in a skilled workforce.

He stated that having an Australian classroom where 60% of the international students belonged to one or two countries at most, was not optimising the Australian student or international student experience. He also raised questions on whether students could be convinced to enrol in study areas where the country is facing shortages, as he concluded his statement.

Australia’s Department of Education, Skills and Employment data for 2020 reveals that Covid-19 has had a significant impact on the first nine months of travel restrictions on international student enrollments and commencements.

The country’s ELICOS sector witnessed the lowest drop since 2012, with 104,626 enrollments accounting for a 33% drop on previous year.

DESE, however, warned that the data should be looked at with caution as an enrolment does not necessarily mean that the student was in the country at the time of reporting.

Overall, China continues to be the largest country of origin for international students in Australia with 28% of total enrolments, followed by India with 17%, Nepal with 8%, Vietnam with 4% and Brazil with 3%.

The VET sector, however, recorded the highest enrolments from Indian students with 21%, followed by Nepal with 10.6%, China with 7.1% and Brazil with 6.8%.

A declining interest from Indian students in Australia could be a major concern for the country’s higher education sector. The country registered a decrease of over 80% compared to 2019 from students from India.

In 2020, universities in Australia laid off at least 17,300 jobs and lost around $1.8 billion in revenue compared to previous year, as reported by Universities Australia. The organisation further estimates a loss of $2 billion (5.5%) in 2021.