International Students Confused Over Vaccination Requirements in the US

With no federal mandates regarding vaccine requirements, US higher education institutions and states have imposed their own vaccine regulations increasing the confusion between international students regarding the processes that they need to follow to properly attend classes and on-campus activities. 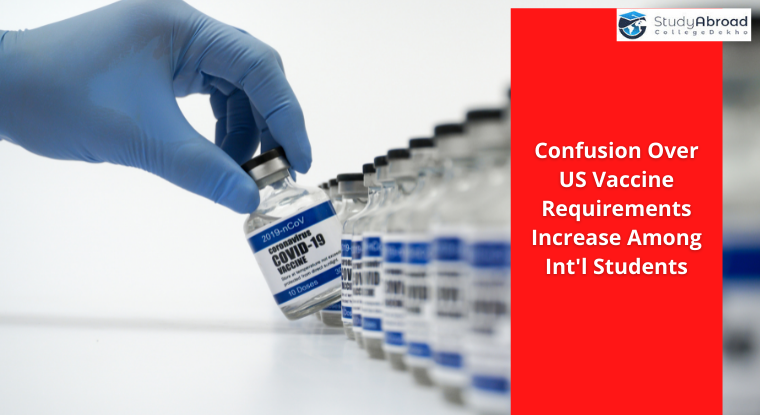 As the world to stand back up during a pandemic, the US has become one of the countries that have opened up its borders for international students with a few restrictions in place.

However, reports of international students being confused regarding vaccine requirements have surfaced. The confusion seems to have arised from reports of students requiring additional jabs with state-level restrictions varying greatly between institutions.

In the US, the federal government is yet to impose a regulation around vaccinations, which has led the institutions to design their own policies around the vaccines accepted by the institutions, that any student aspiring to be on-campus must have received.

Most universities in the US and abroad are accepting vaccines that have been approved by the FDA or the WHO. However, a few popular international student markets like India and China have offered students vaccines that are yet to be approved by either of the authorities. Thus, students who have received these 'unapproved vaccines' will be required to quarantine for a period of 2 weeks while also setting an appointment for receiving the approved vaccines.

As per Lynn Pasquerella, the President of the Association of American Colleges and Universities, the varying regulations and strict requirements of the vaccines have resulted in the 'dramatic decline in enrolment in colleges and universities, especially amongst international students'.

She further added that “the absence of a national policy around vaccines” leaves the individual institutions to develop their own policies, thus, directly affecting the students negatively, both psychologically and economically. In most current cases, students are required to reside within the quarantine residencies, participate in remote learning and receive the approved vaccines before being allowed to engage in any in-person or on-campus activities.

Also Read: Indian Talent Choosing Canada Over the US Due to Outdated H-1B Visa Policy: Experts

She also highlighted the absence of a federal mandate which has caused states to pass their own policies, which confuses the international students. As per Pasquerella, a proper line of communication must be established between the institutions and students.

She commented that the duty of being transparent and communicate with the students regarding the changing guidelines lies upon the colleges and universities while considering the latest state policies, CDC recommendations as well as their own policies.

However, state-wise policies and restrictions regarding vaccinations and COVID-19 mitigation strategies may cause an increase in the number of COVID-19 cases, especially with the transmissibility of the Delta variant, thus also fearing the closure of the universities once again.

As per a joint statement from the US Higher Education organistion have claimed that the state’s policies that restrict the use of public health tools which are effective and established, especially during a time when the cases rise rapidly.

In the statement released by the HE organisations, Universities and colleges have gained around 18 months of “hard-won experience” while combating the pandemic and curbing the spread of the virus within the campus in and around the surrounding communities.

To ensure the viability of such a success will only be possible if the universities and colleges have access to all the public health strategies to curb the further spread of the Delta variant and stop the surge in COVID-19 cases, hospitalisations and deaths this upcoming semester.

As per the US HE organisations’s argument, such restrictions imposed on colleges and universities to operate safely and fully, during such an unpredictable time, undermines their ability as well.

With these restrictions in place, the universities and higher education institutions remain unable to take responsibility in imposing reasonable public health measures, thus threatening the health and safety of students, staff, faculty as well as other neighbouring communities.

Additionally, since students do not remain within the bubble of higher education and venture out into the neighbouring communities, the risk of transmission to and from these communities will endanger a lot of people, especially those who are at a higher risk of contracting the virus.

While vaccinations have been made available to all student and residents of the neighbouring communities, many are still hesitant to receive the same for different reasons. With these restrictions and surge of cases because of the Delta variant, many people have been hospitalised and died as a result of insufficient spaces and rooms at the hospitals.

With the Fall Semester around the corner, higher education stake-holders are afraid that the surge of the Delta Variant cases will result in shutting down the higher education institutions once again.