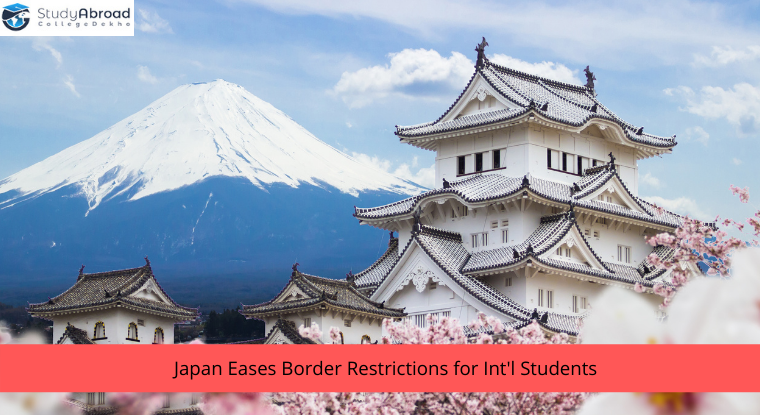 Latest Update (March 7, 2022) - The new announcement by the Japanese Prime Minister Fumio  Kishida of raising the cap of entry to 7,000 people per day has raised hopes among international students. The students will be given priority on certain days when the entry of businesses will be less. This will ensure that the students enter the country smoothly while keeping intact the peace of Japanese residents.

The process will start on March 14. The international community has applauded the news. Though there is ambiguity on how the prioritization process will be conducted, still hopes have been risen by the announcement. They are optimistic that in the future there will be faster entry and a higher cap on entry.

The cap on the entry will affect the rates of flight. This will not be economically fit for students who would try to enter Japan. The application and availability of visas are also time-consuming for them and it's doubtful whether the whole process will be complete before April. The entry arrangements which are being made will be only a temporary solution according to the experts. Everyone is advocating for higher limits on entry.

Along with this, Kishida also informed that the preventive measures of Coronavirus have been extended to bigger cities too including Tokyo where there are chances of spreading the virus. Japan is now walking on a tight rope to maintain economics, domestic politics, and international cooperation.

(February 22) : After the announcement of raising the 3,500 daily caps to 5,000 daily entries of international students in Japan, several stakeholders and students have raised concerns over whether the cap is sufficient.

David Rossi, CEO at Go! Go! Nihon stated that while increasing the overall cap of international student entries per day into Japan “was a step in the right direction”,  5,000 entries per day “is not nearly enough”. He added that nearly 400,000 new entries have been waiting for 2 years. A community of students waiting to enter Japan under the border, @StrandedOutJPN, also confirmed their issues with the entry cap.

Speaking to the media, a spokesperson highlighted that the pre-pandemic levels saw 150,000 to 200,000 entries per day, compared to that, “5,000 entries per day is a very small number”. Further, fears of missing out on another semester to cap were also raised, Rossi added.

Currently, Keidanren and Komeito have been in the process of persuading the government to further increase the cap, the @StrandedOutJPN representative stated.

Komeito is the ruling Liberal Democratic Party’s junior coalition partner has been working hard to pursue more change, along with a few politicians from the ruling party. Keidanren, the Business Fereation in Japan has been pushing the cause for its workers.

(Feb 18, 2022): Japan is now prepared to ease border restrictions that it had imposed to check the spread of the Coronavirus. Japan’s earlier stance on restrictions of its borders has been taken in a bad light by educators and world leaders.

Nearly 1,50.000 non-resident students have been prevented from coming into the country. This has massively damaged the reputation of Japan. Though it had briefly relaxed the restrictions towards the end of 2021, the spread of the Omicron variant led to the closure of borders again.

Media reports that now 5,000 people will be allowed daily to enter Japan instead of the earlier norm of 3,500. The quarantine period has been reduced to 3 days depending on the country they are traveling from and the application of full vaccination and the booster dose.

82 countries have been declared as “high risks” and the citizens of those nations have to be mandatorily quarantined for 3 to 6 days.

Fumio Kishida, the Japanese prime minister has received public support owing to the measures but the experts are of the opinion that the virus is everywhere and Japan is being left behind due to its stringent policies.

(Jan 21, 2022 ): The Japanese government is being criticised for the lack of a timeline for the reopening of Japan's borders. This delay is causing people and students from across the world to "lose trust" in the country.

Currently, the people prohibited include international students, workforce, spouses and dependents. Students and well-being groups demand that the Japanese government make an announcement as soon as possible.

Anaís Cordeiro de Medeiros (Brazil) had to take the entire program online and shared that she had to cancel and rebook her flight many times. She states that students need Japan to come up with a clear plan and inform them of the same.

The lack of information is proving more devastating than the prohibitions. Since the students have no idea how to plan their education and lives and when they will be able to go to Japan.

Currently, Japan is the only G7 and OECD country that is not letting long term students arrive and also doesn’t have any referral or action plan prepared. The concern is that while other OECD countries (New Zealand and China) also have borders closed they have a plan which they have announced providing assurance to the international students.

Davide Rossi (Go! Go! Nihon, Head) stated that current border policies are only harming a section since most people can easily immigrate and emigrate but students have been forced in a certain limbo.

Rossi elaborated that partner countries will change their views and also upcoming international students might shift to neighbouring countries such as South Korea.

In a recently published Nikkei Asi’s news, Johns Hopkins and other US universities have decided not to send undergraduates under an exchange program in the upcoming Spring semester. The decrease in interest in exchange programs will prove detrimental to Japanese universities.

Furthermore, there is the issue of the availability of graduate jobs and the time limit of application to these jobs.

A Taiwanese woman after finishing her graduation discovered that the job market of Japan is not as wide as she expected. She shared that most of her batchmates had already applied for jobs and having a backlog only worsened the case with needing to apply for jobs shifting with arrival in Japan.

Shiyou Naka (Linc, Head, a job-hunting support company) states that graduate students need to apply for jobs as soon as they arrive in Japan or they will miss the right timing. International students try to get jobs in large companies that narrow down their applications and the students end up either going back or pursuing higher education. The time taken to decide the future course may cost these students the timeline to apply for jobs.

Rossi worries that Japan will fall back if international human resources are not appreciated. While Cordeiro stated that students only want to learn in a healthier way, such a treatment of young students is dangerous for upcoming future generations.

Find Out the Best Courses in Japan for International Students!