81% of Int'l Students in UK 'Happy' With Their Decision to Start Studies in 2020: Survey

Overall satisfaction in the UK in 2020 was the second highest with an average of 7.1 out of 10, with the US recording an overall happiness level of 7.5 out of 10 although the sample size in the US was relatively small. 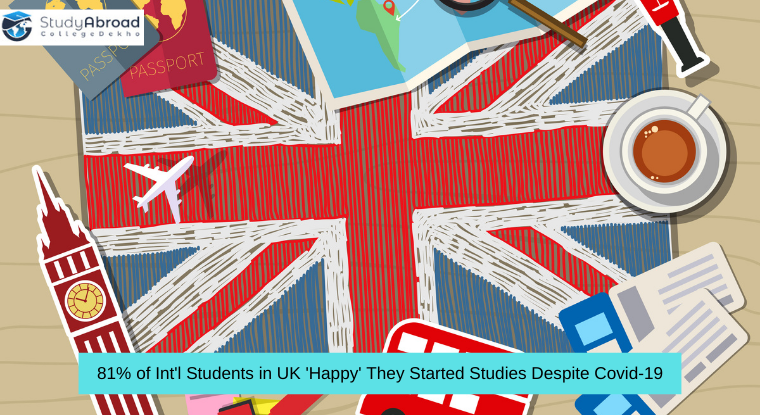 A research conducted by Universities UK International (UUKi) and IDP Connect found that 81% of international students in the UK are happy they started their studies in 2020 despite the Covid-19 pandemic. They have rated their happiness as six or above on a scale of one to 10, which was higher than students in countries such as Australia or Canada.

England’s Office for Students also noted in its annual review the hard work and “impressive speed” of UK higher institutions in shifting to online teaching and adapting to changes due to the pandemic.

However, the chief executive of OfS Nicola Dandridge said that the organisation has been specifically concerned about the impact of Covid-19 on international students among other groups of students in the country.

The review also pointed out that reports of hate crimes and harassment towards students have continued during the pandemic.

The survey involving a total of 783 current international students in the UK, Canada, Australia, US and New Zealand recorded an overall satisfaction rate of 6.4 out of 10, with the US at the top, scoring 7.5 out of 10. However, the sample size in the US was relatively small, with only 41 respondents.

Overall satisfaction in the UK was the second highest with an average of 7.1 out of 10 and students in Australia and Canada rated their overall average happiness as 6 and 6.2 respectively.

Around 30% of 182 current international students at UK higher education institutions said that they were provided with any special non-academic support this year. Similarly, 52% of the 326 respondents in Canada and 40% of the 222 students in Australia said the same.

Director of UUKi Vivienne Stern said that the survey revealed that the majority of international students who started their studies in 2020 were happier than those who went to other study destinations amid the pandemic.

She further added that the biggest reason for the satisfaction of international students in the UK is the “swift action” from the government of the UK, paired with the amazing work of the higher education institutions and the entire sector in welcoming students from all over the world during this period.

The research showed that students were also happy because of flexibility on start dates, support when quarantining, support for mental and physical health offered by UK universities.

Chair of OfS Sir Michael Barber said that more progress was made by UK universities and colleges in a month than in the last five years.

Another research conducted earlier this year in June found that 77% of the respondents wished to quarantine, whereas the recent survey carried out in October found that 92% of them wanted to quarantine rather than defer.

Barber added that the OfS will review the digital mode of learning in early 2021, which will put forward lessons for the future.