A GMAC research reveals that international students are demanding enrolment in a number of Graduate Management Education programmes and their concerns for COVID-19 are declining. Further revelations include which group of students prefer online study, who prefers mobility over online study and the top study abroad destination amid COVID-19. 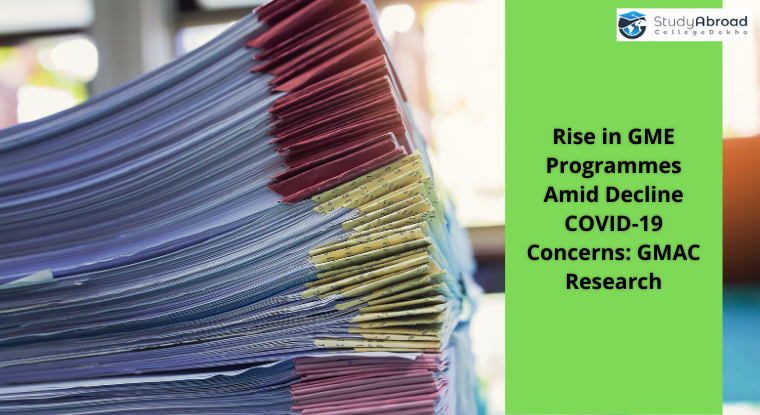 The year 2020 has been one of the most difficult times for the youth of the 21st century who have been working towards a credible resume to pursue a lucrative career. With federal government regulations restricting travel and movement between countries, several students found themselves stuck in the respective country of origin.

A recent Graduate Management Admission Council (GMAC) research released on March 31, 2021, revealed that the number of study-abroad aspirants who wished to pursue a management course still remain undeterred even in the current situation.

The GMAC research revealed that the number of study-abroad aspirants who were concerned with COVID-19, dropped significantly over the past year, with only 33% of the aspirants still worried, compared to 41% that were worried about the virus earlier last year. It also revealed that 73% of the students remained undeterred with their original plans to study abroad.

Further, the research also highlighted that the female students saw online or remote studying as equal to the on-campus learning experience when considering the career opportunities being offered, and therefore accept a larger portion of their programmes in online mode.

President and CEO of GMAC, Sangeet Chowfla, stated that with the large-scale availability of the COVID-19 vaccine, international students are witnessing hope during the pandemic. She added that seeing large numbers of female applicants aspiring to pursue advanced management programmes, especially during such trying times, is encouraging.

While the female candidates are interested in pursuing higher education remotely, a large portion of the international students still prefers to travel out of their country and pursue higher education in one of the top destinations for higher studies.

The GMAC research revealed that nearly half the international student population (40%) still look forward to studying in a country outside their own. The report revealed that the primary reason behind an international career outside is to move outside their home country. Among the reasons, the work and living opportunities abroad motivate 70% of international students to stick to their original plan of studying abroad. This, in turn, motivates the students to choose mobility over online teaching, as they wish to experience life abroad.

Over half the international students, i.e. 58% revealed that they planned to pursue a graduate management education (GME) programme, while 37% of the students reported that better job opportunities and job skills were the major reasons for pursuing a GME course. The research revealed that students are realising the need to be more career-ready in a highly precarious economy.

Also Read: US Witnessed 18% Decline in Foreign Student Enrolments in 2020

The GMAC Board Director, Soojin Kwon, stated that the pandemic has rattled the future of work and skills that lead to a successful career. He added that business schools have recognised this change and are continuously adapting to meet the requirements of the aspirants in terms of professional and leadership qualities, in a bid to meet the demands of the workplace.

4) The United States Remains the Top Choice Among International Students

Many international students, especially from India and China still consider the US as one of the top study abroad destinations. Students from Canada and the UK choose the US as a study abroad destination as well. However, the decisions and policies implemented by the previous US Government, coupled with the pandemic, resulted in a drastic dip in international student enrolments, especially from India and China.