Earlier, the ‘dual intent’ was available for other visa programs and not F-1 visa. Now, F-1 visa applicants would not have to provide evidence that they plan on returning to their home country upon completion of their studies in the US. 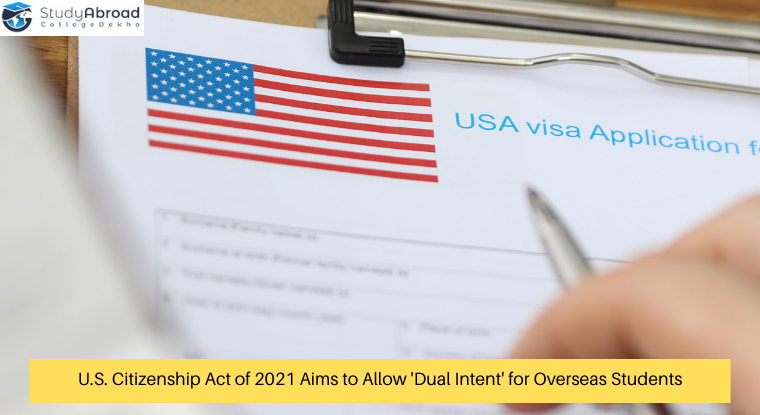 The American Council on Education said that the new immigration bill of the U.S. Citizenship Act of 2021 aiming to allow dual intent for international students will attract more students wishing to study in the US.

Introduced by representative Linda Sanchez and senator Bob Menendez in February 2021, the new immigration bill includes provisions that would help overseas students through permitting ‘dual intent’ to F-1 visa applicants and making it easier for STEM graduates to stay in the US.

Director, government relations at ACE Sarah Spreitzer said that the ‘dual intent’ is huge and they are hopeful that it will prove to be helpful and a welcoming message for international students.

Earlier, the ‘dual intent’ was available for other visa programs and not F-1 visa. Now, F-1 visa applicants would not have to provide evidence that they plan on returning to their home country upon completion of their studies in the US, Spreitzer added.

Visas are sometimes rejected in case an overseas student fails to explicitly demonstrate that they plan to go back to their home country after graduation.

Karen Fischer, a journalist, said that nine out of 10 applicants whose visa applications were  denied relate to failure in proving that they wanted to come to the US to study and then return to their home country after completion of their course.

ACE and NAFSA earlier placed the provision of ‘dual intent’ at the top in their wishlists for the Biden administration.

Section 3401 of the new immigration bill outlines another proposal for international students, which wishes to create a new green card program for STEM PhD students graduating from an accredited for-profit or non-profit higher education institution.

Spreitzer explained that if an international STEM PhD graduate wants to stay in the country, he/she can immediately apply for a green card. In addition, the per-country caps on green cards will be re-assessed.

Section 3410 of the bill aims to do away with such issues and grant an extension for non-immigrant visas including those with F-1 visa if they have a pending visa application for more than a year.

Extensions for such visas would be made in one-year increments and will permit work authorisations once such extensions have been granted.

Spreitzer explained that in case a student has a pending visa application for more than one year, he/she can stay in the US on that visa status which would help with the ongoing OPT delays.