No Quarantine in UK for Fully-Vaccinated Indian Travellers

In what comes as a major relief for Indians, it has been announced that fully vaccinated Indians travelling to the UK will no longer have to undergo a mandatory 10-day quarantine from October 11. 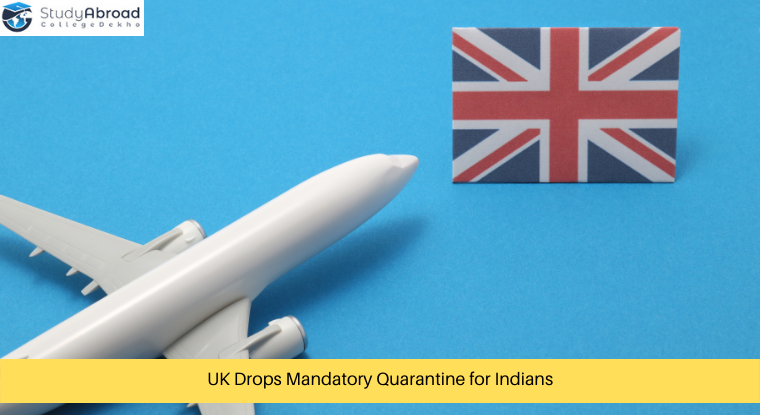 The UK, on October 7, announced that Indian travellers fully vaccinated with Covishield or any other UK-approved Covid-19 vaccine will no longer have to undergo quarantine upon arrival in the UK from October 11.

In the previous month, the country had approved Covishield and added it to its list of accepted vaccines. However, the country still required fully-jabbed travellers from India to quarantine for 10 days upon arrival in Britain. The UK had also said it didn’t accept the CoWIN certificate.

This led to a major row between the two countries. However, recently, a British High Commission spokesperson said the decision to remove quarantine rules for fully-vaccinated Indian passengers was made after close technical cooperation between both countries’ ministries taking public health factors into account.

Use Our Comprehensive Search to Know the Best Course for You to Study in the UK.

The spokesperson added that the extension of vaccine certification is a further step to let people travel more freely again in a safe and sustainable way while also protecting public health.

Welwyn Hatfield MP Grant Shapps tweeted that he is making changes allowing travellers from 37 countries including India, Turkey and Ghana to face fewer entry restrictions. They would be treated the same as UK’s fully vaccinated passengers.

Earlier, the UK had not even added Covishield to its list of approved vaccines. This drew sharp criticism from India, with foreign secretary Harsh Vardhan Shringla saying it was “discriminatory”. Following this, the UK, on September 22, revised its travel advisory and included Covishiled as an accepted vaccine but still required Indians to quarantine and get tested on arrival.

This further led to India updating its travel advisory and stating that all British nationals travelling to India will have to undergo a mandatory quarantine of 10 days irrespective of their vaccination status.