As the country was gearing up to welcome more international students this year after a long time, since the pandemic started, New South Wales has announced a pause on its student return pilot programme, resulted due to the outbreak of the Delta variant of COVID-19 in Sydney. 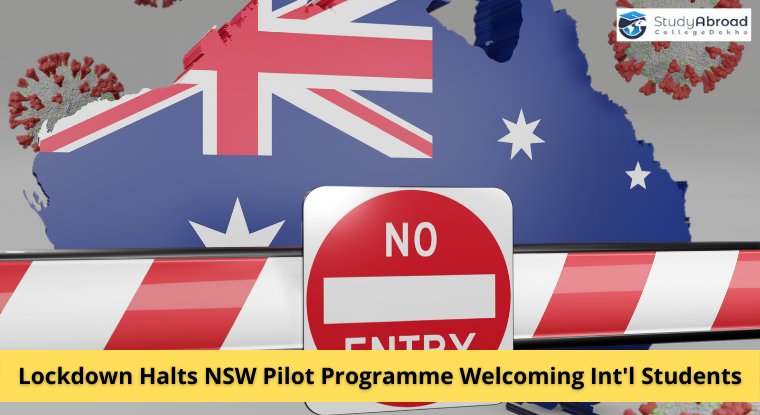 With the current lockdown in the country, New South Wales has halted its plans to bring in international students in a bid to kickstart its struggling education sector. A statement released by Premier Gladys Berejikilian had confirmed the pause on the pilot programme, stating that with the lockdown, the programme would not succeed.

While the state government has not specified the end date of the lockdown, however, sources state that a “lengthy extension would push the programme’s start date into the later months of the year.”

The pandemic and the resulting border closures have hit the Australian universities hard, as the number of high-fee-paying international student enrolment has reduced. The international student education sector of New South Wales is worth $14 billion a year. Additionally, students were reported to spend an average of $60,000 more, along with their academic expenses.

However, with the outbreak of the Delta strain of COVID-19 in Sydney, the challenges faced by governments and the sector planning the return of the international students is underscored by the importance of keeping its residents safe.

Dominic Perrottet, NSW Treasurer, a couple of weeks ago had announced the plans of bringing in 250 international students to the state, every fortnight, as early as July ‘21. According to the plan, as the year went by, the number was expected to be ramped to 500 students every fortnight, while the students covered their flight costs and the universities took care of the quarantine bill for their stay at a specific accommodation in the inner-city Redfern.

Alan Tudge, the Federal Education Minister, welcomed the move and backed NSW’s move to getting out of the lockdown and reducing the numbers. While keeping the safety of Australian’s as the number one priority, the Federal Government will be working with the states and their plans to bring in the international students when the conditions allow.

Additionally, Australia’s four-stage reopening plan for the country that was announced earlier this month will also hinder NSW’s plans to help students return. As per sources, pilot programmes will be allowed through phase one, permitting limited entry of student and economic visa holders. However, further phases will limit the number of students capable of entering, further complicating the plans.

Professor Barney Glover, NSW Vice Chancellors’ Committee Convener, commented that the pause was a “sensible response”. However, he added that the committee was in talks with the state government with regard to the logistics to ensure the pilot was ready once the lockdown was lifted. Professor Glover, Vice-Chancellor of Western Sydney University, emphasised the importance of permitting international students to study in Australia and how it impacted the state and their universities.

Chief Executive of International Education Association Australia highlighted that the delay would result in universities being at risk of entering the third academic year, i.e. 2022, as international students remain unable to enter the country in significant numbers.

He commented that time and effort had been put to make NSW the second state to welcome international students. While the governments know that it can be done safely and separate from other international arrivals, UK, Canada and the US have completely opened their borders to international students. He emphasised that the delay will “put at risk a whole three-year pipeline of students…” and cause long-standing social and economic damage to the country.