The College Board has officially announced the removal of Subject Tests and Essays from its SATs. Stating the irrelevance of the components, students will now not be required to prepare for Subjects tests and essays while preparing for the renowned test. 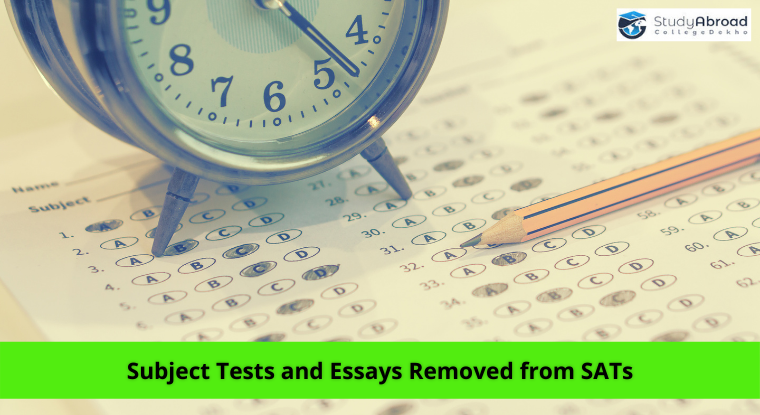 The New-York based organisation, College Board that hosts the Scholastic Aptitude Test, has announced that the subject tests have been scrapped along with the optional essay. The decision has led to a drastic decrease in the overall duration of the test by 50 minutes.

The SATs helped aspirants to enrol and take admissions in different undergraduate programmes, while 40 universities in India, both deemed and private, also accepted the tests scores. The Board offered Subject Tests with 20 multiple-choice questions in an individual subject. These were usually used to improve a candidate’s report during college admissions.

The Subject Tests were a popular choice, especially for Indians who passed out of State or National boards in high school. The reasoning behind the removal of the subject tests, the college board states, is to “reduce the demand on students.”

The aims of one of the College Board programmes, i.e. the Advanced Placement Training Programme or APs, overlapped with that of the Subject Tests. The APs were designed to be longer and tougher to qualify the students who previously were required to complete a prerequisite course in the first of their UG course, for a higher-level course in the same field.

Globally, the optional AP is recognised as College-level courses that are taught in high school and an AP diploma is commonly accepted around the world. However, in India and other countries, where AP is not an additional option in the high school curriculum, Individual centres will provide the programme and allow the students to participate in the test in order to present a competitive academic knowledge in top universities.

In a press release submitted by the College Board, they highlighted that the immense reach and availability of an AP programme nullifies the need for subject tests and the motive for students to attempt it as a display of their academic prowess in different subjects. Sources state that subject tests have been removed immediately for US candidates, however, the same process for international candidates will be in phases.

On removing essays from the SATs, the Board stated that the Universities have found essay scores to be irrelevant to the admission process. Sources state that popular Ivy Leagues do not need essay scores in the SAT score docket. The Board states that the changes to the tests are being made to accommodate the dynamic needs of the colleges and students alike. Further, removing the essays will “streamline the process for students who have other, more relevant opportunities to show they can write an essay as a part of the work they’re already doing on their path to College.”