As our dependence on technology is increasing every single day, there is no doubt that STEM jobs have become one of the fastest-growing fields. Jobs in Computer Science and Technology is expected to grow exponentially within the next decade, bringing in new employment opportunities, that may remain vacant due to lack of STEM graduates. 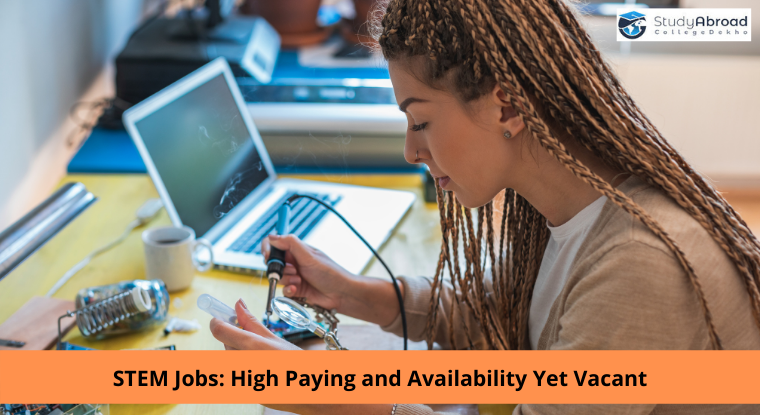 With the technologically advanced century that we are living in, STEM jobs have increased more than non-STEM jobs since 2000 by at least three times. Experts in these fields have commented that there may not be enough graduates to fill the jobs either.

Kenneth Hecht is a leader at the National STEM Honour Society (NSTEM), a membership programme that encourages students from kindergarten to pursue a life in STEM project-based learning. He commented that the manner in which today’s tech giants are growing, today’s high school kids may end up in jobs that do not exist yet.

Here, STEM covers both long-established and high-tech professions, such as jobs as actuaries, critical care nurses, cartographer and epidemiology or those in tech fields such as informatics, cloud computing or other software developers, recognised for writing codes.

According to a study by the Institute of International Education, tech or computer technology has been one of the more popular areas of study among international students, even though jobs in the medical and healthcare fields as a result of the COVID-19 pandemic and an ageing population.

The Bureau of Labour Statistics website projects a growth of 11% between 2019 and 2029, which is a “must faster than the average” for any occupation in the world.

Additionally, jobs in the field of computer technology are expected to add around 531,000 additional jobs in the United States by 2029. BLS expects jobs such as in cloud computing, information security, big data will be high in demand.

While COVID-19 has gravely affected the different sectors, especially international students aspiring to study at different universities in the world, STEM still continues to be an attractive option.

Nidhi Thaker, a PhD student in Biochemistry and Molecular Biology at the University of Massachusetts - Amherst, commented that combining biology with technology unleashes a range of opportunities that can help the field grow.

However, many experts and seniors in the field of technology and computer science have lamented that talented and qualified tech professionals lack people skills.

Sahil Jain, a Senior Enterprise Architect at Adobe commented that while some tech professionals are great at their jobs, they lack proficiency and soft skills in communicating effectively with senior leadership. He emphasised that hard and soft skills are crucial in building a successful career in emerging technology jobs. However, the same applies to those who possess the required soft skills but lack the necessary proficiency in their respective fields.

Jain also pointed out that the field of technology continues to grow and expand, developing newer technologies and ideas that such as machine learning and AI, among many others.

According to a study conducted by Impact Science, an estimated 2.4 million STEM positions are expected to remain vacant, even with initiatives such as NSTEM guiding and encouraging young students to pursue a career in different sectors of STEM.

Fears of immigrants taking over American students seats started to form earlier this year, however, the National Foundation for American Policy conducted a study in April 2021, that put these fears to rest. The study revealed that offering admission to more international students did not lead to fewer seats for American students. Instead, the opposite had been witnessed, with an increase of Bachelor STEM degrees being conferred to US students.

Companies such as Google, Microsoft, Facebook and Twitter along with other tech companies in a group letter to the Immigration and Customs Enforcement, stated that the country’s “... future competitiveness depended on attracting and retaining talented international students”.