Claims of fraudulent activities during GRE Online test at home have been brought to light by the Indian franchise of The Princeton Review. Exploiting certain test design flaws, candidates have been accused of seeking help from experts and collaborators during the test. 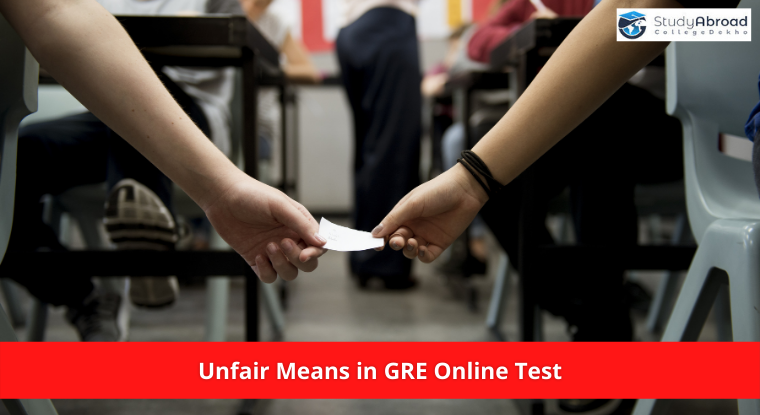 The largest Indian franchise of US-based The Princeton Review has highlighted the use of unfair means among the students attempting Graduate Record Examinations (GRE) Online from their homes.

In brief, GRE is a standardised test organised by the Educational Testing Service (ETS), which is headquartered in the US. The test is conducted for the purpose of offering admissions to different graduate schools in Canada and the US. Statistics from the ETS has revealed that 85,050 students attempted the GRE in 2019, meanwhile, 90,146 attempted from China and nearly 4 lakh candidates from the US took part in the test as well.

The Indian franchise raised the issue to the Ministry of Education and Niti Aayog apart from highlighting the issues to the ETS. The franchise wrote to the government speaking on the ‘morality’ behind students using unfair means along with its impact on the quality of education.

Many students, while speaking to the media under anonymity, shed light on their extremely cautious steps taken to take an unfair advantage.

As per sources, the GRE at Home requires the students to pan around the room and display the entire room to the assigned proctor, to ensure that the student is alone in the room. If the proctor suspects, he/she would randomly ask the student to display the room once again. The exam can commence, or even re-commence once the proctor is satisfied with the invigilation.

Under the GRE At Home test, candidates are allowed to freely go through a section forwards and backwards during the exam. This opportunity has created a path for those who wish to gain an unfair advantage over others.

Sources, who claim to have witnessed the use of unfair means, claim that a person would enter from outside the peripheral vision of the camera, which makes them technically invisible to any proctor. This outside person will then be able to click pictures of the questions while the candidate on-screen goes through the section. The outside person then leaves the room, solves the questions with the help of other collaborators, brings in the answers on a piece of paper.

A Biomedical Engineering student in the third year also claims that most of the people who attempt tests on another person’s behalf are commonly studying in their third or fourth year of the course. Teachers from different institutes reach to these 3rd and 4th-year students to help in the cheating in return for money. Commonly, a group of 4 or 5 students, usually receive a sum ranging between Rs 30,000 - Rs 40,000.

Speaking to those who ‘collaborated’, stated that they participated in the act, for the money and to learn more about the exam pattern. They further highlighted that a few management students in the first year also connect with the teachers and end up helping.

From Manya Education, Aradhna Mahna, the co-founder and director, stated that a few of their students, especially from Telangana and Andhra Pradesh reach out to the teachers for help. She added that the organisation operates over 40 centres that prepare students for over 40 different competitive exams. This makes the organisations the biggest operation of The Princeton Review outside of the US. Many stated that the issues had been pointed out to the ETS, however, due to a rather ‘casual response’ Manya Education approached the Government with the issue.

A spokesperson from the ETS, talking to the media on the issues, highlighted that the attempts of using unfair means during the exam have constantly been addressed. The ETS has characterised a number of ‘improper testing behaviour’ as fraudulent and is taken seriously. ETS states that various prevention measures are taken while also undertaking investigations when such attempts are brought to light. The spokesperson further assured that ETS has been able to invalidate the scores of those accused of these behaviours, thus, ensuring the score validity in the world.

In response to changing the GRE test guidelines to overcome such fraudulent activities and exploitation of the design flaws, the spokesperson told the media that no plans to update or change the format of the test are in the workings. ETS aims to provide similar testing experiences to students who wish to take the tests at home or in tests centres. The Spokesperson added that the at-home offering will be a permanent offering from the ETS, even after COVID.