Governments in the UK are being asked to increase the quarantine capacity for international students coming from Red-List countries between the beginning of summer and mid October this year. One potential solution discussed was to ask universities to let their own accommodation be used as quarantine facilities. 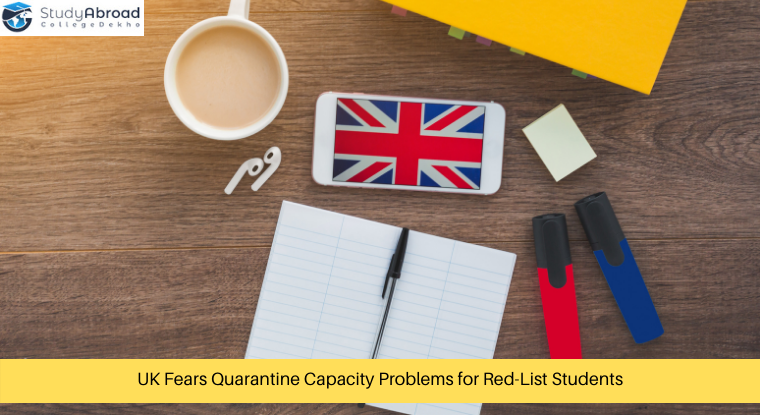 With around 100,000 students from red-list countries expected to arrive in the UK between the beginning of summer and mid October this year, the country is fearing a quarantine capacity problem. For the same, the sector has discussed one of the solutions as letting universities use their own accommodation for quarantine.

Travellers coming to the UK from red-list countries, holding residence rights are required to quarantine for 10 full days in a hotel facility.

According to reports, the numbers of quarantine hotel rooms were as low as 28,000 in February, which could now be even lower. With countries like India and Indonesia on the red-list, international students are likely to face quarantine issues after arrival in the UK.

The Department of Health and Social Care (DHSC) has reportedly established a management quarantine board dedicated to handle this international student issue.

One potential solution emerged to ask universities to let their own accommodation be used as quarantine facilities. However, the same would require changes made to government guidelines.

The Labour MP, Paul Blomfield, who chairs the All-Party Parliamentary Group for Students said although the influx of international students was a huge positive, there is potential that it would overwhelm the quarantine system in place.

Wish to Apply to UK Universities for the Next Intake?

Director of Universities UK International (UUKi), Vivenne Stern, said that if this continued to be the case, there would be a “clear quarantine capacity problem”.

Also Read: Tough Times for Indian Students in the UK as India Remains on the 'Red List'

Now, the concession has been extended to April 2022. Stern said that the concession was crucial as their fallback plan is to staffer arrivals if they need to.

At the same time, UUKi was also working with DHSC to explore more options such as changing some requirements around quarantine capacity, letting universities be used as sites for quarantine accommodation.

In Scotland, around 8,000 students are expected to arrive but only some 900 spaces are available in hotels. The Scottish government is currently considering using cruise ships to quarantine international students.