New changes to the H-1B visa system will focus on prioritising applicants with higher incomes, as announced by the US Citizenship and Immigration Services. The new changes are expected to be considered from March 9, 2021. 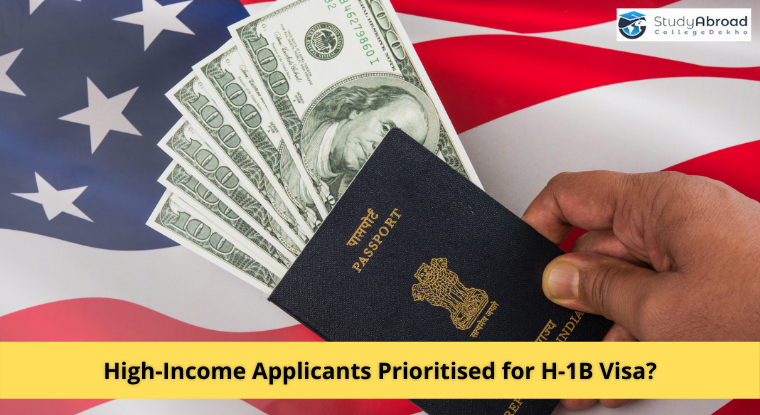 Starting March 9, 2021, the process of issuing an H-1B Visa will be modified to give more importance to applicants from higher income group, in a bit to overcome the lottery system followed today. The announcement has been made by the US Citizenship and Immigration Services.

For international students, H-1B visas can become a possible pathway to develop a career in the country after their graduation. In 2017, 34,488 foreign national converted from F-1 to H-1B visas. Currently, the number of visas that can be issued in a year is limited to 85,000.

This programme, the USCIS Deputy Director for Policy Joseph Edlow stated, was abused and exploited by employers in the US, with the main objective of filling up the entry-level positions and cut down on costs.

In 2019, 71.7% of all the approved petitions that had been received from Indian-origin beneficiaries, more the 388,400 H-1B petitions had been approved in FY2019. Over 54% of the applicants possessed a valid masters degree, meanwhile, 66.1% had planned to work in a computer-related field and US$98,000 was the median salary.

Sarah Pierce, the Policy Analyst for the US immigration Policy Programme, stated that this would “disproportionately affect students interested in the coming to the US, study and then getting an entry-level job after graduation”.

Previously, there were many applicants with the lowest level of wages applying for the visa, however, with the new system, it is expected to see few or even no candidates with level one wages.

Trump, in his 2016 election campaign stated that the H-1B visas were unfair to the US workers. However, stakeholders have found themselves on an impasse as to whether abuses under the H-1B visa system prevail. Nonetheless, the few who agree, state that US companies lay of US nationals and outsource the work to business-employing H-1B visa holders. This is not considered illegal, unlike firing workers and directly employing H-1B Visa Holders.

Sources state that quantifying the issue is a challenge as the current data available for the displacement of US workers is nearly unreliable. It is crucial to gather more data on the issue and undertake more research on the same.

Pierce commented that the administration is dedicated to learning more about this pattern and the policy changes are expected to address that specific fact as well. The administration is also focused on certain broad changes that will hurt both legitimate and illegitimate H-1B visa employers.

The Executive Director of the Presidents’ Alliance on Higher Education and Immigration, Miriam Feldblum, further disputed that the US nationals were losing their jobs to H-1B visa holders, stating that these visa holders broadly work in low unemployment areas.

Miriam further stated that “... the talent, energy and innovation...” brought in by the international students to the US economy and marketplace are fundamentally misunderstood. She added that if the foreign students feel that they do not stand a chance of studying and working in the US, they will further be disinterested in travelling to the US for their higher education.