With COVID-19 bringing a halt to all the sectors across the world, reports and surveys suggest that the education sector may still recover. As per surveys, nearly half of the Indian students who received an admission offer to the UK, wish to continue their admission as usual. 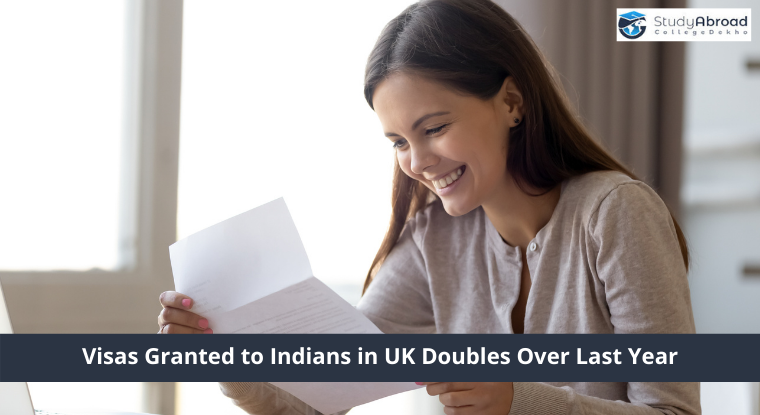 A constant fear among the stakeholders of the education sector, especially during the pandemic is the declining number of aspirants who wish to pursue international education. However, reports and figures suggest a different outlook of the students.

As per an official statistics report released on Thursday, Visas granted to Indian nationals to study at universities in the UK have jumped up twice compared to last year. Till March 2020, out of the total sponsored study visas, 17% of the students were Indian Nationals.

The Office of National Statistics (ONS) found out that the number of applicants since 2016 has been on a rise. Moreover, it had also been revealed by the ONS that 40% of the study-visas came from China, followed by India. The study-visas have been boosting the overseas student arrivals in the UK.

However, it shall be noted that the figures revealed were data that has been collected until March 2020. Therefore, the data is yet to be compiled considering the effects of the pandemic. It is expected that the pandemic might affect the numbers from India, as well.

The Director of Centre for International Migration at the ONS, Jay Lindop, stated that the migration levels were beginning to increase in the past year, leading to the COVID-19 pandemic. The migration number had been affected due to the student arrivals from China and India.

Mr Lindop added that the International Passenger Service data had been collected up to March of 2020. With the world going into lockdown post-March, data accounting the significant effects of the pandemic have not been compiled.

Further, it has been decided that the UK’s new post-study work visa or Graduate Route is expected to work from the 2020-21 academic year. Sources claim a positive impact for Indian student applications to various UK universities, as a provision to apply for work at the end of their degree will be made available to all students.

Nonetheless, the pandemic and the various travel restrictions of each country had put a halt on the international education of these students. Thus, furthering the fear of many UK Universities, who claimed that international students may wish to defer their study abroad aspirations due to COVID-19.

This fear was, however, put to rest by a survey conducted by the National Indian Students and Alumni Union UK (NISAU-UK). The survey revealed that almost half the Indian students had who received an offer, were indecisive about accepting the admission offers.

The results of the survey also coincided with the data revealed y the UK Universities and Colleges Admissions Service (UCAS), which displayed a spike in the university applications for the current academic year. It also showed that Indian students were ready to commence their autumn semester which had been postponed till September 2020.