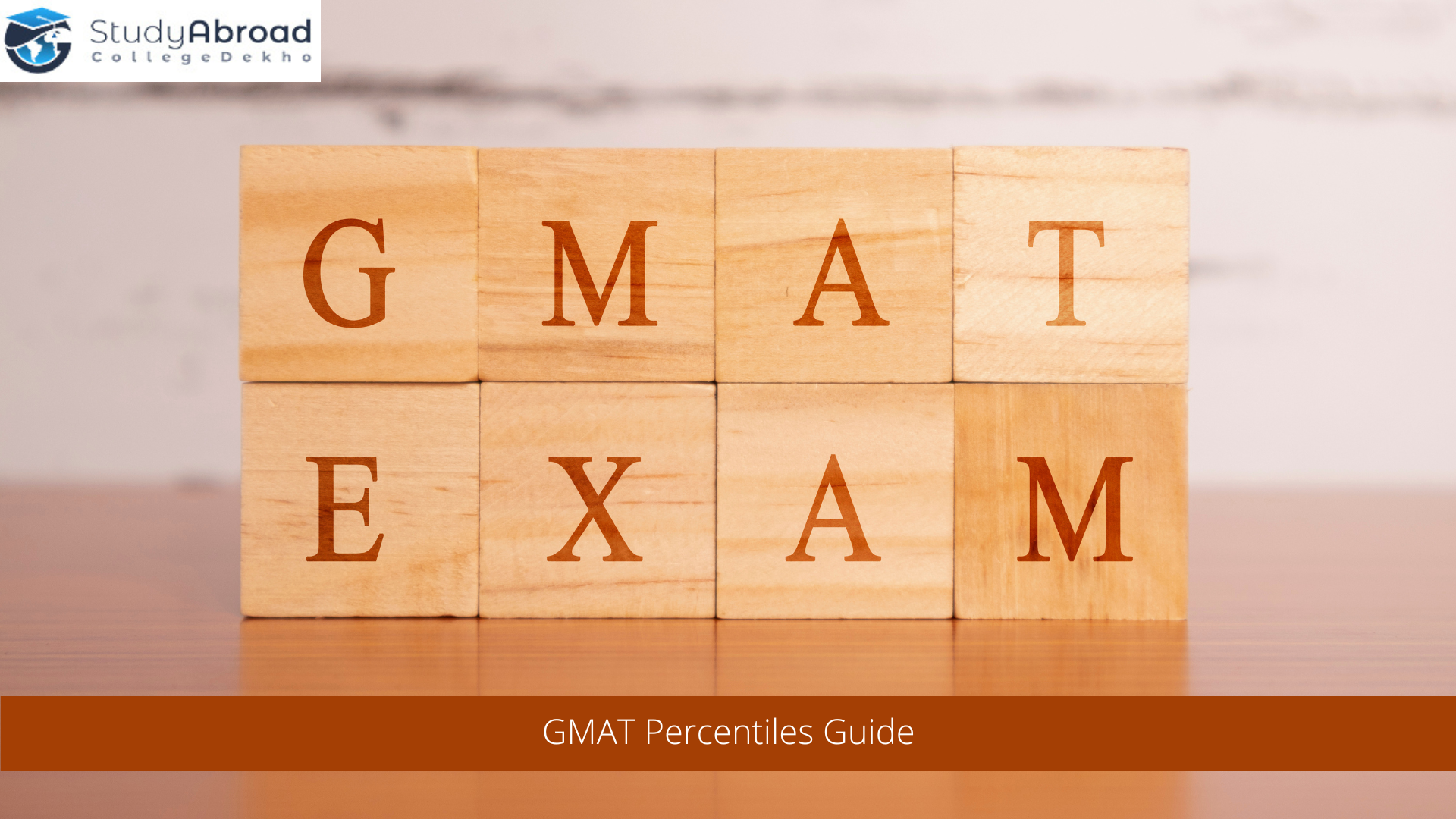 A GMAT score is an important part of the application process. It is the first milestone on the way to your desired business school. Scoring a good GMAT score is as tough as getting into a top business school.  Nowadays, percentile rankings are more competitive than ever due to increases in average math and total score averages.

In the majority of tests, you may quickly determine your score by counting the number of correct responses. But for years, test takers have been perplexed by the GMAT's Quantitative and Verbal scales of 0-60 and total score range of 200-800, which are not tied to the number of correct answers. Knowing your percentiles can help you determine whether your GMAT score is above average or if it has skyrocketed. Graduate Management Admission Council or GMAC (conducting body of GMAT) produces this information on GMAT percentile charts.

The GMAT has four sections: Verbal, Integrated Reasoning (IR), Quantitative or Quantitative, and Analytical Writing Assessment (AWA). For each section, you receive a scaled score. Take note that only the Verbal and Quantitative component results are used to determine the GMAT total score. The following is a section-wise breakdown of GMAT sections and scaled scores:

Did you know our study abroad experts offer a wide range of test prep services including extensive GMAT preparation? Avail of our services today to ace your GMAT exam!

Start Your GMAT Preparation With the Help of Our Experts!

What Are GMAT Percentiles?

In a GMAT score report, percentile rankings for both your overall score and each of your section scores are mentioned. Percentiles represent the portion of test-takers you outperformed. If your score is in the 75th percentile, you outperformed 75% of other students. The remaining 25% achieved a score that was equal to or greater than yours.

For instance, if you took the GMAT in 2012, your percentiles may change from the time you may receive your official result or report. This is because percentiles, which are revised annually, may vary significantly over time.

What is the GMAT Score Range?

Your performance on the Quantitative and Verbal portions of the exam is represented by your total GMAT score, which has a range of 200 to 800.

The results for Analytical Writing and Integrated Reasoning are entirely independent and do not count toward your final GMAT score of 800 points.

What is the Average GMAT Score?

The GMAT test is taken by around 150,000 diverse learners each year, including retakes, for a total of about 250,000 test attempts. Only 9% of these students achieve a score of 700 or higher, 1% achieve a score of 760 or higher, and 93% often do not achieve what is regarded as a good GMAT score. Here is the typical GMAT score reported by GMAC for test-takers between January 2018 and December 2020:

How are GMAT Percentiles Calculated?

Your scaled Quant and scaled Verbal scores, which range from 6 to 51, are compared to those of other test-takers. This is not included in your overall GMAT score, which is between 200 to 800 points. The percentage of applicants you outperformed in each GMAT section is indicated by your percentile score.

In other words, if you performed better than 80% of all other test takers on the Verbal section, for instance, you scored in the 80th percentile. The percentile has a defined range from just above 0 to 99.99. You cannot exceed yourself on the GMAT, hence you cannot achieve the 100th percentile.)

Scores on the GMAT are given in increments of 10, such as 700, 710, 720, and so forth. For admission to a graduate management programme, like an MBA, the GMAT evaluates specific analytical, quantitative, writing, and verbal skills. Between 400 and 600 is the range where roughly 70% of test-takers fall.

Finally, based on your overall GMAT score, you will be given a percentile ranking. If you achieve a high score, your total GMAT percentile is likely to be greater than either your verbal or quantitative percentiles. The average GMAT score as of 2022 is 570 points or roughly the 40th percentile.

The percentile chart represents how percentiles for GMAT scores and total scores correlate.  The total GMAT score ranges from 200 to 800. GMAC reports that the overall GMAT test taker average is 551.94.

The quantitative portion has a score range of 0 to 60. GMAC only publishes information on scores in this range since students hardly ever get a 51 or a 6, respectively. The quantitative GMAT score average is 38.91. You can see from the graph that you need to have excellent arithmetic skills to score above the 80th percentile.

Register With Us Now!

The Integrated Reasoning component, which was added in 2012, is graded on a scale of 1 to 8. This section's average score is 4.23. An ideal score of 8 correlates to the 92nd percentile, as only roughly 8% of test-takers get this total.

The AWA score on average is 4.37. An essay score of 6 is considered to be the 90th percentile, as only roughly 10% of test participants get that mark.

To conclude, earning a high GMAT score is not about blind practising, but rather about understanding everything in detail. Putting a major effort to learn from errors is also necessary to achieve a high GMAT score. So, playing to your strengths and managing your weaknesses are two of the most crucial skills to learn in your GMAT preparation.

Whether you need expert assistance to apply for top B-schools abroad or want to know how to score a perfect 99th percentile on GMAT, you can always write to us at abroad@collegedekho.com.

Speak to an Expert Now!

What is a 90th percentile GMAT score?

A 90th percentile GMAT score means you have outperformed the majority of test-takers by a significant margin. This percentile is based on GMAT scores from the previous three years. Additionally, while your Verbal and Quant results are added together to obtain an overall score, the average for each area varies.

Yes, GMAT percentiles do change every year. This is because the percentage is results provided on a collective average of all test-takers over the previous three years. With a recent modification, applicants actually witnessed a verbal gain of 1% and a quant fall of 1-2 % which are attributed to the growing greater levels of overseas quant applicants. However, there is never a substantial shift.

How do I calculate my GMAT score?

You can calculate your GMAT score by combining the subscores from the Quantitative Reasoning and Verbal Reasoning sections of the GMAT, this gives your final composite score. The grades for each of those categories range from 6 to 51 points, and the cumulative result is graded from 200 to 800 points.

What is an unofficial GMAT score report?

An unofficial GMAT score report is the one you get immediately after the test is completed. You have two minutes to decide whether to accept or reject your GMAT scores. This report includes all your test results except for Analytical Writing Assessment (AWA) Section.

GMAT Enhanced Score Report contains results for every GMAT section in detail. This report will be delivered to you in 20 calendar days. The following is a thorough list of post-exam diagnostic data is provided to you by an ESR:

Is a 700 score on the GMAT considered good?

Yes, a 700 score on the GMAT is considered a good score. Most MBA experts agree that anything over 650 is good, and anything above 700 is excellent. Top MBA programmes often require a GMAT score of 700 or above. Although this does not necessarily exclude other applicants with scores below this cutoff from admission to their desired university.

Does the GMAT score include the Integrated Reasoning section?

Are GMAT percentiles important when applying to business schools?

Yes, GMAT percentiles are important when applying to business schools. Business schools evaluate your application based on your percentiles as well as your scores. Schools frequently use your GMAT score report as the starting point of their review, even though they do not normally disclose a cutoff score. Before looking at the rest of your application, the committee could check to see whether you have a certain GMAT score.

How do I determine my target GMAT score and percentile?

You can determine your target GMAT score and percentile by researching the information provided on each B-school’s official website. Most colleges release data on the average GMAT scores required for the admittance of international students. If you cannot find it, you can directly contact the admissions office and ask for information. After researching for your desired school, spend some time familiarising yourself with the exam structure, how it is scored, and prepare well for it.