How to Convert GPA to Percentage? 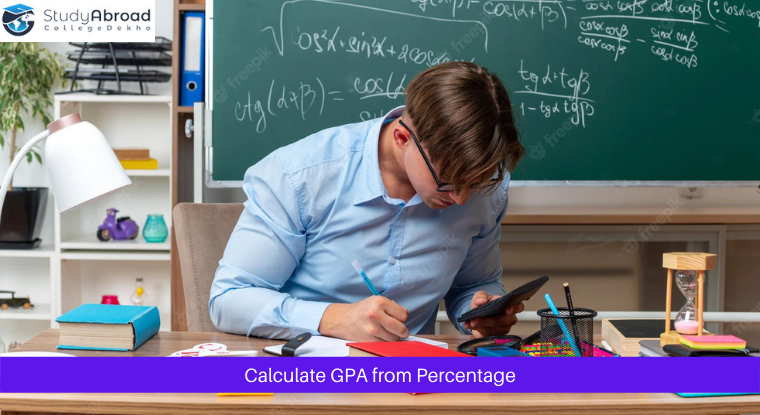 Universities across the globe and in India, follow their unique grading system that scores students based on their academic performance. The Grade Point Average (GPA) marking system is followed by most foreign universities in countries like the US, UK, Germany, and Australia. While in India, the percentage system is widely followed, giving a particular division to the students.

A student's GPA is one of the key indicators of their skills and merit. This grading system helps foreign universities to determine where a candidate stands based on their grades in previous courses. Obtaining a high GPA will not only help academically but also professionally as there are a lot of popular companies that assess applicants based on their GPA. So it is crucial to have a clear understanding of how to convert GPA into a percentage.

What is a GPA?

Just like the way professors and instructors give grades to assess a student's progress in the course, GPA is a score that is used to evaluate the student's success in a degree programme. A student's GPA number shows what they have scored in the classes throughout their semester, term or year. These scores can keep on fluctuating as per the progress of their overall grades in the university.

In GPA, alphabets or grades A to F is considered grade points. To take out GPA scores for a student, universities or colleges calculate their average or overall performance and classify them under the grades - A, B, C, D, E and F. With this, it gets easier for foreign universities to figure out whether the candidate is a good fit or not.

Get Assistance in Applying to Top Universities!

Talk To Us Now!

What is a good GPA?

There is nothing called a 'good GPA,' as the GPA score requirement varies from university to university. If a student wants to check whether they have got a good GPA score, they can simply compare it with the respective university requirement. This is because there are universities that even prefer a 2.0 GPA score on a 4.0 scale, while other universities hardly prefer candidates below a 3.5 GPA score.

What is the Indian Grading System?

Universities and colleges in India stick to the percentage grading system. Students in the country are graded by a percentage that classifies them under a respective division. For instance, a student who scores 75% and above is given a Distinction. First Division is allocated to those who obtain a score between 60% and 75%, the Second Division for the range of 50-60%, and the Third Division for scores between 40% and 50%.

How to Calculate GPA from Percentage in India?

In the USA, students either get scored out of 4.0-grade points or a 10-point GPA system. Certain European countries consider using a 10-point grading system widely. Now, to calculate GPA from the percentage in India on the 4.0 GPA scale, it has to be compared with the Indian grading system of percentage, i.e, 100. Every 25 points are equal to one point in the US GPA. So, the formula to calculate GPA from percentage in India on a scale of 4.0 is to just divide the obtained percentage by 100 and then multiply it by 4.

How to Convert GPA into Percentage?

Certain universities ask for GPA scores, while some prefer percentages. As India uses the percentage scoring system, it is important to learn the conversion of GPA to percentage. As mentioned, the GPA scale has 4 points and each point needs a value. Now, the percentage score is out of 100, so the students are just required to accommodate these 4 points within the 100. Hence, the student just needs to divide 100 by 4, which means 25 points to 1 GPA. Finally, divide the percentage obtained by 100 and multiply it by 4 to get the GPA.

So, the formula to convert GPA to percentage is Grade Point Average = (percentage scored /100) * 4.

To make it more simple, students who want to convert their letter grade or a percentage to GPA score on a scale of 4.0 can refer to the chart given below. The figures mentioned in the chart are mostly used by colleges in the US.

If you are required by your university to convert your academic report according to the required education standards, there are professional organisations that have been working in the domain for several years. One organisation is called the World Education Services (WES) and specialises in evaluating international academic credentials as per US and Canadian education standards.

With the help of WES evaluations, you will be able to have your official academic documents verified, authenticated and evaluated as per the required standards. In fact, most top universities in Canada and USA require international student applicants to have their academic credentials evaluated by WES or any other reputed or recognised academic credential evaluation institution.

Depending on the level of education you wish to pursue at some of the top US or Canadian universities, you will be able to choose between Course-by-Course and Document-by-Document evaluation types at WES. However, for both the WES evaluation types, international students will be able to have their documents verified, authenticated and evaluated and sent over to their desired universities within a span of 7 days.

Key Things to Know About GPA

To know its complete benefits, one must first understand GPA's popularity and acceptance amongst universities abroad. GPA is the primary scoring system in countries like the USA, Canada and Australia.

The four-point GPA is also known as an Unweighted GPA. Certain universities use a 5-point grading system which is not as popular as compared to the 4-point GPA.

There are platforms such as WES iGPA Calculator that helps students to convert GPA into percentage or vice-versa. It is important to cross verify the score as a miscalculation can impact the student's admission process. Hence, it is advised to refer to trusted websites that offer GPA conversion services.

So undoubtedly, maintaining an attractive GPA score can help get better possibilities for a shining future. Universities give students chances to prove themselves by offering GPA in each semester or term. This also helps to assess a student's progress along with their strengths and weaknesses, pushing them to work towards their goals.

Some universities in Europe accept percentage scores to avoid confusion and complications that arise from calculating the GPA score from percentages. Admission officers of such universities keep a good knowledge of the Indian grading system to evaluate the results obtained by the students in the Indian format.

Find the Right Course and University!

Speak to Our Expert!

Our study abroad experts on board can guide international students through the student visa process. To get help, contact us at abroad@collegedekho.com.

What percentile is 2.9 GPA?

A GPA of 2.9 is considered 84 percentile and a B grade. The GPA is lower than the 3 which is the national Grade Point Average. Several universities admit students based on this GPA. Though it is not possible to get into a top university with this GPA, it is possible to make it into an average college.

What is the full form of GPA?

The full form of GPA is Grade Point Average. GPA is a number that refers to your score obtained in your course on average and is based on letter grades (A, B, C, etc.). It is used to score you and determine whether you have a high or low score. These scores are then used to analyse your suitability for the course you are about to study at the college or university.

What is the easiest method to calculate GPA?

The easiest method to calculate GPA is to first find out the grading scale which can either be a 4.0 scale or a 5.0 scale. Collect the grades that you have received and record the point value for each of the grades. Add up all the grade values. The final grade is to be then divided by the number of classes you have taken.

What is the formula for the conversion of GPA into percentage?

Is a 3.3 GPA good for university admission abroad?

Which GPA score is considered good for admission to top universities?

A GPA score between 3.0 and 3.5 is considered good for admission to top universities and colleges. However, the ones which are extremely prestigious and competitive require a score of more than 3.5 GPA. A lower GPA can help you secure admission to colleges but may not help you in getting other support services and scholarships.

How does a good GPA help?

A good GPA helps in getting admission to your desired college as most universities have their own cut-off. A good GPA also increases your chances to get a scholarship which reduces the cost of foreign education. Further, employment opportunities abroad are mostly based on GPA, meaning a good score will help you secure a good job.

What is the 4.5 GPA to percentage conversion in Australia?

The grading system of Australia is on a scale of 7. A GPA of 4.5 is considered a pass and is a C grade. The percentage secured is around 50% for a 4.5 GPA. A score of 6 to 7 is considered good for admission to Australian universities.

The GPA for 70% is 3 GPA on a scale of 4. It is used for a range between 70 and 74 per cent. Student scoring stands on a border between a good and average GPA. With the help of this GPA, a student can get admission to good colleges but needs to be supported by a good CV, essays and letters of recommendation (LORs).