Discover the best Universities, Courses, Exams and Education updates all over the world 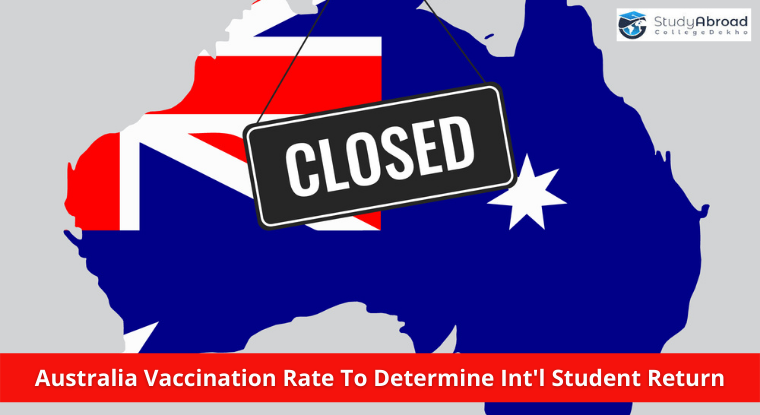 On 16th August, Alan Tudge, the Education Minister commented that provided the vaccination rates increase at the current rate, the ability to welcome international students back to the Australian universities will be determined accordingly. The statements were made in response to address the concerns that had been made regarding the return of the international students.

While speaking on the topic, the minister highlighted that the next milestone to achieve 70% vaccination of the eligible population, helping the country transition to an increasing the entry cap of student visa holders, depending on the availability of quarantine facilities. Minister Tudge highlighted his confidence in returning to the significant numbers it first held. According to current data from the Department of Health, 23.5% of Australians have been fully vaccinated since February 2021, when the vaccine rollout began.

Various organisations across the country have been working with the state and federal governments in helping international students find solutions to the challenges and issues they face due to the pandemic.

The founder of one such organisation, i.e. Australian-Indian Sports Educational and Cultural Society (AISECS), Gurnam Singh, commented that setting a timeline for international students to return is important, just as vaccinating the vast majority of the population.

While speaking to the media, Singh added that the government can mandate compulsory vaccination with quarantine measures that can help students return to the country. He added that he will be working on bringing out flight arrangements that can bring back students if such a plan rolls out.

Supporting the sentiments, Lisa Singh, the former senator and Deputy Chair of Australia India Council Board back Gurnam Singh’s statements, highlighting that the federal government should offer a timeline and clarity for international students to return.

Revealing certain statistics, Minister Tudge acknowledged the drastic decline in the higher education commencement of Indian students and Nepalese students by 55% and 40%, compared to the previous year.

He also acknowledged the impact of the massive decline (36.5% since 2019) will be felt for several years, even if the international student numbers jumped back up in 2022. However, the higher education commencement numbers of Chinese students had spiked by 9.5%, in comparison to last year.

He added that the universities that were capable of maintaining a comparatively good investment income were those that were broadly dependent on Chinese students.

A spokesperson from the Department of Education, Skills and Employment highlighted that any future decisions on the international student return plan of Australia will be dependent on expert health guidance and in accordance with the government directives at the time.

Statistics reported by SBS highlighted that more than 9,000 enrolled Indian students are stuck offshore, and more than 19,000-course deference had been witnessed from India since 2020. This drop in the international student numbers has been felt by universities across the country, with many expecting and hoping to recover once health and safety can be guaranteed.