After months of deliberation, the National Medical Commission has announced considering offering relief to Indian medical students who have returned from Ukraine and China due to the global crises. While there are no accommodations in the NMC’s rules, this consideration will be a one-time offer for the affected students. 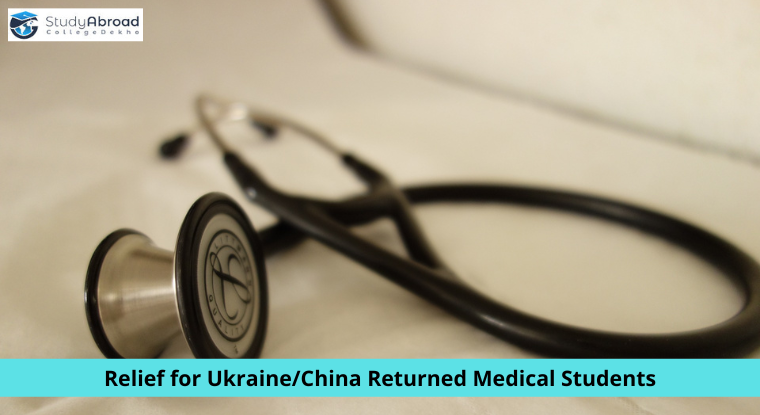 After months of deliberation, the National Medical Commission (NMC) has announced considering offering Indian medical students enrolled in Ukraine and China some relief. According to NDTV, the NMC is “actively considering allowing final year medical students who returned from Ukraine and China” to finish their medical education online and attempt the FMGE exam in India.

As per official sources, this concession is a one-time offering to help out Indian students affected by the war-inflicted Ukraine and pandemic-hit China. In a proposal to the Health Ministry, the Undergraduate Medical Board (UGMEB) of NMC, stated that the students clearing the FGME will be permitted to complete their internship as per the Compulsory Rotating Medical Internship (CRMI) rules, however, for a period of two years instead of the usual one-year duration.

The NDTV reported that UGMEB suggests these students take the NEET exam and enrol in a medical college in India according to their merit. While speaking to PTI, the official source added that those unsatisfied with the UGMEB’s decision are allowed to go abroad and complete their studies.

In the official source’s statement, CIS countries like Romania, Russia, Kyrgyzstan and Kazakhstan have displayed “their willingness” to admit candidates affected by the current global crisis to continue studies in their countries. Last year’s NMC rules stipulate that undergraduate courses should be completed from a single institution or university if candidates wish to attempt the FGME exam.

NDTV further reported NMC’s view of the foreign medical course curriculum of foreign medical qualifications not being in sync nor at par with the Indian medical education system or standard. Further, UGMEB stated inadequate infrastructural facilities as well as faculties to accommodate additional medical students from abroad in Indian medical colleges and institutions.

These deliberations between the NMC and the Health Ministry were the result of the Supreme Court’s directive published on April 29, directing the regulatory body to come up with a solution to help MBBS students affected by the global crises to complete their clinical training in Indian medical colleges, the official source told the PTI. Currently, no accommodations have been provided under the NMC rules for Indian students pursuing medical education abroad to return home mid-way and complete the rest of their studies here.